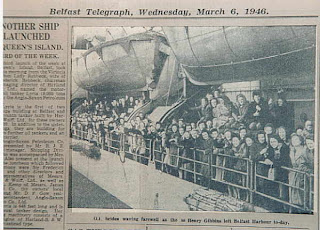 During the course of the annual Thanksgiving get together, my mother-in-law announced that on Monday, October 11th, it will have been 64 years since she arrived in Chilliwack as a war bride with a 7 month old son in tow. If she had to do it over, she would have the 3 sons, but would have stayed in Scotland!

War time in Europe was not a period of straight thinking. Air raids, bomb shelters and dances where the local girls mixed with soldiers were all a part of the unreality. Everyone lived for the moment as no one really expected to live. So it was with little consideration of what it meant in the long run that she ended up married to a Canadian soldier and had a baby. When the day came to leave, my mother-in-law just wasn't going. She didn't want to leave home, country, friends and her way of life. It took a heated discussion with her minister and mother to get her on the boat. 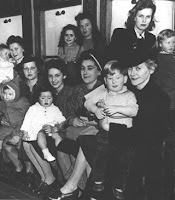 First there was the long ocean voyage with all the other war brides and babies. Then they were loaded into a rail car to take them across Canada. At one point the rail car she was in was left on the track with women and babies inside. No milk for the babies or food for the mothers. She got off and started walking to find milk much to the distress of those in charge. When she wouldn't stop unless she got what the baby needed, they finally relented and provided for the women and children.

The journey ended on a farm outside of Chilliwack. My mother-in-law was a born and bred city girl and had been told stories by soldiers all through the war about how amazing Canada was. Imagine her distress when she landed on a farm, living with her husband's family who were a little worried about the foreign woman and child he brought home. That first year her husband lived in Vancouver while he attended school, leaving her alone to make her way in a foreign country with a family she did not know. Even to get to the store meant she had to walk into town, baby in a pram, and walk back. 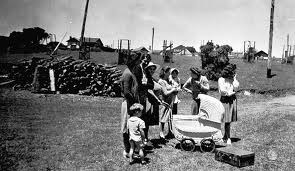 They eventually obtained a plot of land in town and built a small house of their own where they raised three sons. She found a life here by enjoying many activities such as golf, curling and women's hockey. Her mother and brother also immigrated to Vancouver after a few years, so she had her family close by. But she declared yesterday, if she had to do it all over she wouldn't have come. I found it a profound statement as she has had a full and interesting life here and, even when she could, has made no attempt to go back for even a visit.

What would her life have been like in post-war Scotland? There is no way to tell. But over the years I know a few people who tried to go back to a life they missed and found it was not what they remembered. As an immigrant myself I can honestly say, home is where the heart is. My family and friends and life are here - I can't imagine leaving.
Canada Canadian soldiers Chilliwack Europe immigrant People Scotland Thanksgiving Vancouver war bride World war 1