Drew - Artistry on the Runway

on November 11, 2010
All photography courtesy of Peter Jensen.

"Grey clouds drift across the background as a woman clad in a floating creation of crepe, organza and feathers drifts down the runway. Her hair, quaffed in a nest-like apparition, is the sea upon which a delicate balsa wood boat rests. The smoky colours of the dress are mirrored in her austere makeup - two dark eyes set deep within a pale ethereal face." (by Katie Mogan in her article on Drew William in Vancouver Fashion eZine July 2010 - http://vancouverfashionezine.com/magazineissue31/fashiondesigner.html) 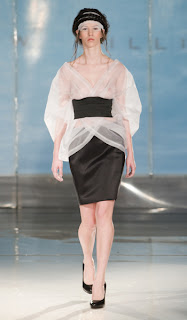 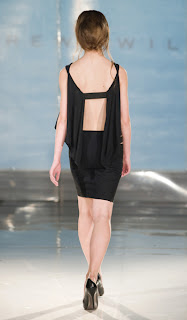 This quote from Drew's VFE article written after his April 2010 showing at Vancouver Fashion Week hints at the designer behind these creations.  Looking at his current collection at VFW this November, you can clearly see the Drew has placed great thought into each of the pieces and also grown as an artist.  Asymmetry in some, balanced symmetry in others, the obvious intelligence put into the collection and unusual construction details such as in the shirt on the right below were blended into a cohesive collection that showcased everything great about his design work. 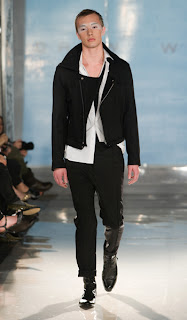 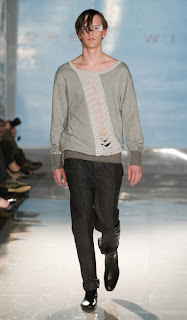 Drew William has a flair for the theatrics of fashion.  His first love was photography, but on an exchange program to London began to study design.  It struck a chord and he left again for Europe to work under designer Henrik Vibskov where he learned drafting and garment construction.  At the same time Drew dabbled in accessory design.  On returning to Vancouver he launched his first mens wear line in 2008.   Since then he has broadened to include womens wear.  While some of his past collection have had a hint of androgeny, this one definitely separated into mens and womens wear.  There are a new breed of designers emerging who take fashion more as an art form and Drew definitely fits into this category.  His show at Vancouver Fashion Week was an expected change from past collections.  As all artists, he is still growing and challenging both himself and the fashion norms.  Kudos. 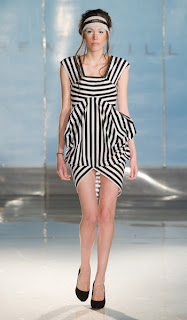 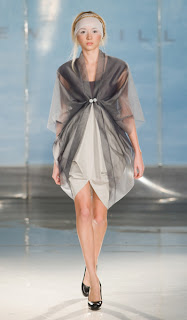 I find the best person to describe a collection is the designer themselves.  They know the creative process that went into a specific collection so I sent an email to Drew asking for a synopsis.  Here is his answer - -

"The collection was based around the idea of stripping back design to it's very core, or line and shape. I physically manifested that with the use of printed and sheer fabrics. I liked the idea that you can see the shape of a body within another shape, then allowed the forms to grow and evolve rather organically. I didn't want to use colour because of the reductivist element. I wanted the collection to be very graphic... I also took a more rustic approach to my pattern making, using a lot of squares and changing grain direction. What most people wouldn't identify is that most of the clothes are actually only 4-7 pieces, they are just draped and manipulated in more complex ways...I really believe it is this multifaceted process and creative development that helps me create the collections I do. Each collection is different, each evolves in an organic, yet controlled, way. The cross over into other disciplines is what keeps my interest, and makes my clothes more than fabric on hangers."

There you have it in his own words.  For more information on Drew William please go to his website at www.drewwilliam.com.  You can also read the VFE article on him at http://vancouverfashionezine.com/magazineissue31/fashiondesigner.html