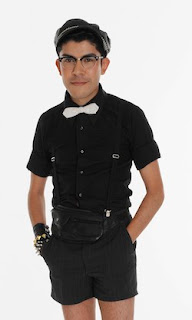 When my children were young I chose to be at home with them, but needed a source of income.  Enter dance costumes.  I personally created and sewed over 200 costumes a year - all custom fit.  They ranged from metallic sports bras up to tutus, but my forte was working with lycra.  After five years it was time to stop.

I do not miss the unbelievable stress, but I still miss the creative outlet.  To fill the void I often follow Project Runway - not for the awful reality TV dramatics, but to enjoy the creative process. From Post-It dresses to Couture, it's a wild ride and sometimes unique and interesting garments come out of the process.  Season eight of the U.S. show was actually a tough one.  Just way too much drama and designers dissing each other for me, but there was some brilliance shining through that kept me watching. One designer I thought stood out was Mondo Guerra.  I loved his creativity, but was also inspired by his personal journey on the show.  It was unbelievably public in nature and brought a strong message of acceptance in what can be a judgmental world.

Mondo Guerra, 32, drew me from the beginning.  He started out the season as what I can only call a tortured soul.  It was hard for him to easily mix, mingle and be comfortable in the out spoken group.  You would notice him quietly working in his own space and giving short answers to Tim Gunn.  His personal sense of style could be best described at quirky and the garments he created had that same outside-the-norm flavour with lots of colour and a unique ability to combine strong prints.  For the first several challenges he moved quietly along, but did garner some momentum with two top three finishes.  Then suddenly he hit his stride and found a way to take his unusual aesthetic and give the judges what they were looking for - something new and innovative infused with his own "Point of View".  Starting in episode eight he was the winner of three straight challenges and had another top three finishes in the coming weeks. In episode nine, his winning high fashion look and a ready-to-wear companion piece earned him $20,000 and a L'Oréal Paris ad shot with the two garments. His comment?  “I came from Colorado with $14 in my bank account. Now, I have $20,014.”   How very real and down to earth!

Over time he grew more comfortable and became an integral part of the group.  I always
appreciated his work ethic.  Guerra stayed away from the drama and just focused on creating something he was proud of.  It was in episode ten, however, that his strength and determination rose to the challenge. The designers were asked to create an original fabric using HP/Intel technology.  The artwork was to be created from an important moment or time in their life.  The garment could be anything the designers chose, but the textile had to be deeply person. It was during this time that he chose to share with the camera his own story of coming out as a gay person. "I came out to my mom when I was 17 and she told me not to tell the rest of the family and that she wasn't going to tell my father.  I think that's been instilled with me.  I can't tell a lot of people about who I am...I have to be myself and I have to allow myself to let people in.  That's really hard [for me]." The fabric Guerra designed consisted of graphic crosses in a vivid colour palette.  He was totally mum with his fellow designers about the personal nature of the artwork, but those of us watching were let in the loop.


On the runway it all came to a head.  Nina Garcia mentioned she would love to have understood the inspiration for his fabric. In a life-changing move, Guerra decided to let her know it was inspired by his ten year HIV positive status.  Earlier in the episode, he had privately shared with the audience how he felt about keeping this inside.  "...[My design is] based on a plus sign that represents my HIV positive status.  I have held this secret for ten years of my life. This has been so hard to keep a secret from my parents because I feel guilt and I feel shame. I can't live that way anymore because I'm such a better person than being a coward."  After the revelation Garcia asked him how he felt and his response was,  "I'm free!"  He won more in this challenge than top garment.  He stepped out of the box he had been living in and received in return acceptance as well strong support from the judges, his fellow designers and the TV audience.


Guerra was one of the finalist who showed at New York Fashion Week.  He did an amazing collection inspired vintage Mexican circus pictures and the Day of the Dead.  Although he did not win the top spot on Project Runway, I think he won the hearts of everyone who watched.  The challenge now is for everyone to let him move beyond that point in time and leave his mark as a designer. We need to let him be freed by that courageous moment, not defined by it.  He has the vision, the talent and the technical skills to bring something new to the table and I will be one of the ones watching and encouraging him to become all that he can be.

For more information visit Mondo Guerra's website at www.lovemondotrasho.com.  (I do have a link to watch episode 10, but it is very slow.  It really is one that is worth watching.)
Aids coming out design inspiration Mondo Guerra New York Fashion Week Project Runway television HIV textiles