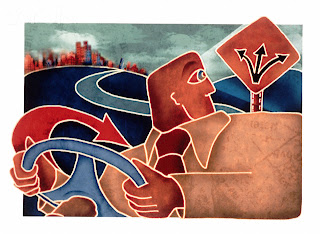 Is it just me or does anyone else think drivers have become a little crazy lately.  With events and magazine delivery commitments, I do have periods I drive quite a bit and always come home shaking my head.  I really DO NOT want to have an accident.  As we head into winter, driving in general becomes more challenging as we add in slippery roads, earlier sundowns and lots of increment weather.   We don't need an additional hazard such as driver in front of you doing something unexpected.  Here are a few examples - some recent, some not.

1.  A car ahead of me is half-way through the intersection on a green light when they suddenly slam on the breaks and stop dead in the middle of the road.  Fortunately all of us behind them managed to stop in time.  Why?  They decided maybe they should have turned right at that corner.  So they sat there for a couple of minutes in the middle of the intersection while we all honked our horn before deciding to continue straight ahead.

2.  A car just getting ready to cross the two lane Dinsmore Bridge decided maybe they didn't want to go that way and slowed unexpectedly to 5 KM/H while they considered if there was any place to turn - there wasn't.  When they finally decided to cross the bridge where it went back up to four lanes, they couldn't decide whether to turn right or left.  Without any warning they crossed from the right lane, across the centre lane, to get into the left turn lane almost taking out a car trying to get around them. 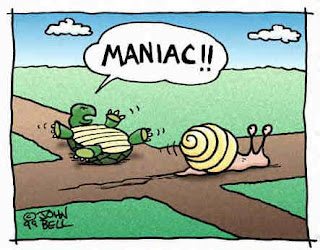 3.  I was approaching an intersection I needed to turn left at (going 10 km over the speed limit) when a large truck came right up on my bumper.  I was unable to pull over in the right lane as I needed to turn shortly.  In anger they tried to speed around me, but there was a car in the right lane as well.  Somehow they squeezed over almost taking off my bumper (if I hadn't put on my brakes they would have hit me) and got into the left turn lane at the light with me behind them.  There they sat through the green light until it turned yellow, then took off at the last minute so I couldn't make the light.  No this wasn't a teenager - it was a man in his 50's or 60's.

4.  A car in the centre lane with his left turn signal on suddenly turned right across two lanes of traffic at a green light.  No we weren't sitting there, we were all moving at full speed.  More than a few cars had to brake and swerve.

5.  I was at a four way courtesy corner in a residential area where tons of kids were walking to school.  I slowed at the corner to make sure the way was clear and a car blew around me on the left narrowly missing several children.  What was interesting?  It was a driver training car and the person behind the wheel was the instructor who was dropping his daughter off at the elementary school.

6.  Richmond has one of those infamous three lane roads - one lane going each direction with a centre lane you enter only to turn left so you are out of the flow of traffic.  Off and on a few speed racers going way, way over the speed limit (there are at least three school zones on this road) have decided this is actually a passing lane.  Fortunately I haven't had it happen, but more than one parent entering the centre turn lane to drop their kid off at school has almost been rear-ended by one of these idiot drivers. 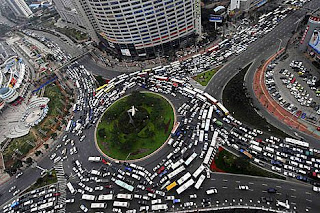 Oh, the list goes on and on.  We've all made mistakes driving, but when it gets to the point that a serious accident could happen it's time to take a breath.  If you miss a turn, it IS okay to go around the block - consider it an adventure.  Someone has to be mentally ill to think it's a good idea to cross several lanes of traffic to make a turn (especially with the opposite turn signal on) or stop dead in the middle of a bridge or a green light.  And it doesn't matter how late you are running, swerving around cars in a residential area where kids are walking to school will only have one outcome in the long one and it's one you will regret for the rest of your life.  Add in pedestrians that  walk right behind your car while you are backing up or step off a curb without looking, and there are days I prefer to not drive.  Unfortunately that's not always an option.

So today, if you're behind the wheel, try and take a breath.  Leave the aggression at home and go a little more with the flow.  If it takes you an extra five or ten minutes so be it, the world will not end.  Most of all, try not to do something unexpected as those of us in cars around you may not figure it out in time.
cars drivers driving Other pedestrians road rage safety traffic