The Poltergeist of the Rings

Sorry, it sounded like a great way to start to ghost story, but it's just not true.  It was a lovely and pleasant afternoon when this saga began.  I was sitting with my oldest son in the living room chatting about life when he threw out that he wanted to make me a ring.  The world stopped turning for a few seconds as I took this in.  I love my kids, but they are busy human beings and don't often make me something.  Aaron was taking an elective at school that had something to do with metal working and they were going to learn to cast rings. He chose to make one for me.  When I could breathe again, we began to consider the difficulty of what size to make it. 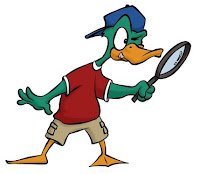 As any good problem solver, I was off to the kitchen.  This room has more gadgets per square inch than any room in the house and there is always a junk drawer full of odds and ends.   I pulled out a ruler and headed back the the living room.  It was simple to pull off the ring, get an inside and outside diameter measurement and write them down.  Here is where it gets sad, so don't be afraid to pull out that kleenex.  I didn't put the ring right back on.  I was walking around the house two hours later when I realized that - A)  The ring was still not on my finger and  B) I had no idea where it was.  I have to admit the ring was not impressive.  Glen and I really did not have funds when we got married and it was a pretty simple band, but it had serious sentimental value.  Despite vacuuming and diving into every nook and cranny of that sofa we have never found it.

Aaron designed a really interesting ring which filled the void as the vain search for my wedding ring continued.  While getting ready to take a bath one day, the front door bell rang unexpectedly.  Startled, the ring I was in the process of taking off goes flying, pinging loudly as it bounces off the hard surfaces.  I quickly put on a robe to answer the door (I still have no idea why) thinking it would be easily found later.  WRONG!!  The ring is completely gone.  When Glen gets home we do a thorough search of the entire bathroom that included pulling the drain traps off.  It is nowhere to be found.  Now I'm headed into serious depression as I've lost two rings with sentimental value in four to six weeks.  No one is amused, least of all me.

Here is where the story enters the Twilight Zone.  Seven long years go by and we have to replace the oven in the kitchen.  The morning the new appliance is to arrive, Glen empties the drawer at the bottom which is full of cookie sheets, a roasting pan, etc.  Imagine his surprise to see the shiny silver ring Aaron created lying in the bottom of the drawer, slightly warped by the heat of the self-cleaning oven.  The happy dance is performed with great exuberance and sacrifices to the lost and found gods are initiated.  The question remains - how did that ring get from the bathroom to the bottom of the oven drawer.  I can think of only one explanation, we have our very own poltergeist!!! One definition of poltergeist is, "Spirit or ghost that manifests by moving and influencing inanimate objects."  Bingo!  Then you have to reflect on what else has mysteriously disappeared over the years never to be found - a full set of keys, that special recipe you never shared as it was your signature and, of course, numerous single socks.  It just explains it all. 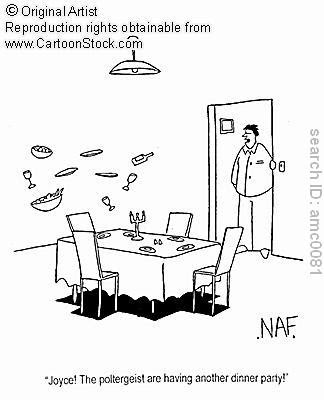 While the wedding ring has sadly never appeared (although after this strange experience I keep  expecting another miracle), I proudly wear the ring Aaron made me in its place. Our poltergeist seems to have been very inactive these least couple of years.  I have no idea if that's a sign it has moved on or is just saving up for a REALLY BIG new prank - but my eyes are open now and I won't be fooled easily.

Now that you have a smile on your face - go have that morning cuppa and enjoy the sunshine. :)
found humor humour lost Other poltergeist ring search