Great events are built on a strong foundation and the person responsible for creating this is the event producer.  One to keep your eye on is Vernard Goud of LuvnGrace Entertainment.  He literally brings a "world" of experience to each event. Born and raised in Holland to South African parents, the family also spent three years in Saudi Arabia before immigrating to Canada. His father was a ship's captain who opened the doors to an even wider world view by sharing fascinating stories of all the incredible cities and countries he had visited in his travels.

Although Goud was raised in Zwartewaal, a small town outside of Rotterdam, Holland, it was a lot different than the Canadian equivalent.  The people there are quite progressive - stylish and open minded - and even young teens are allowed to go to clubs and bars to hear progressive music. He was always curious and as a "tween" began to head into Rotterdam to explore.  He remembers, "I always wanted to know about life outside my immediate surroundings.  I'm a keen observer of people, trends and society in general.  Nothing fascinates me more than why people or societies do the things they do even though most of it is opposite of how I do, like or see things.  I am the nosiest person I know.  This curiosity is where I differed from most of the kids my age and it has never left me."  The time spent in Dhahran, Saudi Arabia, also expanded his horizons.  Many an afternoon found him gazing out at the Persian Gulf in the distance, "...thinking and dreaming, mesmerized by the desert and camels between myself and the sea."

It was the family's move to Coquitlam, British Columbia, when he was 15 that proved difficult to adjust to. "I was just hitting my stride back home - going to clubs, wearing the coolest clothes, then all of a sudden was transplanted into Coquitlam. To say it was depressing would be putting it mildly." Goud boldly set about exposing Canadian students at his high school to the latest in imported music and fashion styles from Europe.  In 1982, he and his sister Saskia took a modeling course.  While they both modelled locally, it was Saskia who went on to international fame.  Goud was her mentor/driver and enjoyed meeting some of the finest local talent such as renown photographer Raphael Mazzucco.  Many become long-time friends. 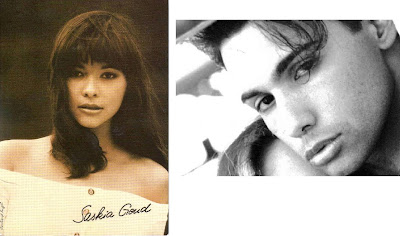 After high school, it was back to Holland for six months and then in 1987 Goud returned to Vancouver and entered the film industry. Initially working as a stand-in and photo double, the jobs offered him an opportunity to explore acting as a career as well as to hook up with a large number of people in the industry including his future wife - Julia. Living downtown during this time provided that stimulating environment he craved. "The city has always been a great teacher.  Nowhere else can one meet so many different people from all different backgrounds and cultures."

In 2007, Goud was just finishing the EMB course at the Vancouver Film School.  He was beginning to reunite with industry friends on Facebook and they were encouraging him to create a reunion event.  "It was perfect timing.  I have a photographic memory and had saved everything to do with pop culture - photographs, posters, writings, etc.  There were pictures, playlists, etc., from the Luvafair Nightclub and it was all put to good use on a Facebook fan page.  I had about 1000 fans in six day."  Called the LuvnGrace Affair, this sold out event (his first) was held on September 25th, 2007. It proved to be the seed that grew to become his event planning company.  "I always knew I would be involved with either entertainment, fashion, music or public relations.  This was something I was good at and I had to continue."

LuvnGrace Entertainment has grown to produce 15 to 20 events a year - everything from fashion, to product launches, to European style club events with high profile DJ's including Lady Starlight - Lady Gaga's best Friend and tour DJ, to the Lancome Olympic Launch with friend and photographer Raphael Mazzuco. Goud is his hardest critic.  A perfectionist at heart, he wants every single detail planned in advance and finds his best reward a satisfied client. He is also very up-front in his dealings.  If he has a question, he asks - if you have a question, he answers it with total honesty.  Each event offers him the opportunity to use his extensive global experience to bring something innovative to the Vancouver scene.  "I love conceptualizing and visualizing events.  I love seeing what I can come up with for each and every event.  The only problem is when clients want to change ideas at the last minute, but hey- that's the name of the game."

Looking ahead to the next five years, Goud has big plans. His focus at this time is producing photographer Sasha Mazzucco's first big show, both here in Vancouver and then in New York City. Son of Raphael and Lisa Marie Mazzucco, this new talent has already photographed the current Sports Illustrated Swimsuit cover girl Irina Shayk and Beats by Dre spokesperson Vildane Zenelli for his private collection. Plans are also in the works for LuvnGrace Entertainment to produce events in other areas such as the Bahamas, Belize and New York City. Goud would also like to move into producing films and documentaries, something he had a taste of when he worked with Raphael Mazzucco and Interscope Records  on the Vancouver section in the Culo by Mazzucco book. His enthusiasm and drive is evident when he states, "Watch out world!  I want my hand in everything.  Fashion, music, art film, charities, etc.  I have quite a bit up my sleeve, but I am just not telling anyone right now."

In closing I asked him if he had anything he would like to share with others thinking of entering the industry.  His advice was right on the mark. "Love what you do.  Be persistent.  Believe in yourself.  Set yourself apart from others.  Be curious, ask lots of questions and make sure you're always networking because you never know whom you might meet."

For more information on LuvnGrace events you can visit the website at www.luvngraceaffair.com. Vernard Goud can also be found on Facebook at http://www.facebook.com/vernardluvngrace.goud.