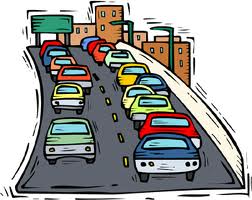 Time for a lighter piece.  I just spent 2 days on the road, one driving all over the crazy downtown area and one driving up the valley on the freeway for an hour and a half dropping off magazines as I went.  There was a time that driving was a stress reducer for me.  When it all got to be too much, I just jumped in my dad's car and drove!  Of course, I lived in Los Angeles at that time and there were miles of roadway to choose from.

The lifestyle of living on the freeway (non-rush hour times of course) no longer appeals to me and I love how close everything is here in Vancouver. BUT, for the last couple years it seems that road construction and repair has become an ever expanding virus.  We all want great roads to drive on, but it's crucial to avoid those areas like the plague and you just never know where the little devils are going to pop up next.  I was talking with one delivery person who said it changed daily.  He never could plan a route that would work 2 days in a row. 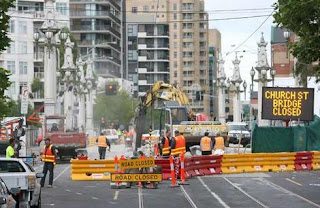 Yesterday I loaded my little blue Yaris hatchback with 12 boxes of magazines and worked my way out to Abbottsford, half by street roads as I had a few stops and half by the freeway.  Where I jumped on the freeway in the morning it looked like there might be a small amount of road work being done in the other direction, but it honestly didn't look too bad.  On my way back, I decided it was probably okay - HAHAHAHA! The area in question did indeed look like a minor section of repair, but as I passed the off ramp and looked ahead I realized it was a much larger stretch than I thought.  While traffic was actually moving okay, it the the off ramps that were crazy.  The construction was on the right side as well and all the off ramps were plugged with large trucks almost at a standstill.  The signage had been revamped to help you understand the complicated way to exit through the construction zone and not all of it was thought out. 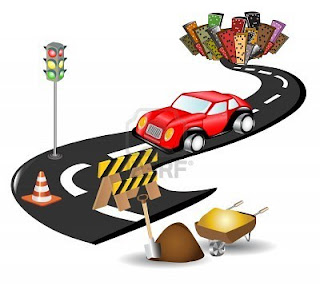 FINALLY, I decided - as did the miniature car behind me - that I had to brave the next off ramp.  The signs appeared and the two of us peeled off the freeway along with a myriad of enormous semi-trucks.  We looked like ants between giants.  Slowly we inched forward along what we thought was an exit - the crucial word here is thought - trying to not be crushed.  Lo and behold we were on one of those short pull offs where they weigh the trucks.  We easily passed the scale test to say the least, but I think both the driver behind me and I never took our eyes off the road in embarrassment.  All those truck drivers must have been shaking their heads and laughing.  Back we went onto the freeway and then 20 feet later ANOTHER sign appeared for the same off ramp and we slunk off, grateful to finally out of the mayhem. 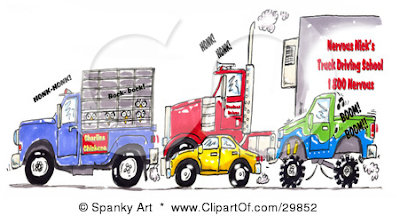 When stuck in road construction, the one thing all drivers want is knowledge.  I think there should be a city construction alert map you could access on the web before you leave home.  For those who forget to check, we need an overhead projection in the sky like the Batman signal telling us how far ahead the work continues and how long we can expect to inch along in minutes, hours or days.  That way we can decide whether to turn at the next corner - if we can ever reach it.  Maybe with all the advances in car technology they could put a road work avoidance system in cars you could activate at will.  Your car would then refuse to turn onto a road with significant delays ahead.  Can you imagine!

Today is pretty much a work from home day.  I do have one event late tonight, but that will be long after the road crews have gone home.  So for now, I get to write away my frustrations.  Tomorrow is another day!
construction driving freeway Other repair road stress