Patch Adams - A Message That Should Continue 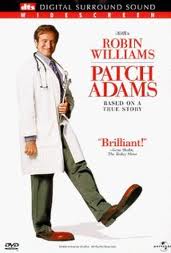 The other night I stumbled upon one of my favourite movies.  I have to admit, in general I chose to watch humour, animation and things like Sherlock Holmes or James Bond that take me away from the regular world.   Life is way too serious on a daily basis.  There are one or two exceptions to this rule and the movie Patch Adams is one.


Robin Williams is actually on my list of people I wish I could interview.  We both lived in California for awhile as his comedic star was rising and I heard all the rumors good and bad.  But not one person ever said they didn't like him.  I found it interesting when he began to move from comedy into serious roles and was surprised that he did well.  I can't vouch for all his dramatic ventures, but in the ones I have seen he brings a humanity and "real-ness" to the role that is impressive.  Patch Adams is no exception.


The movie is set in the 1970's.  Patch Adams is a former mental patient who decides to become a doctor and bring joy and humanity to the medical profession.  This is not embraced by the doctor running the program and the students themselves take a while to come around.  Despite warnings to stop, he continually sneaks into the teaching hospital to get to know those who are suffering and to try and raise their spirits.  I have no idea how much liberty was taken in this area, but it is Hollywood.  However, it still floors me every time I watch it.  Obviously the doctor in charge is not amused and tries to kick him out of the program.  The ending is a happy one and Patch goes on to become a doctor although the road is never smooth. 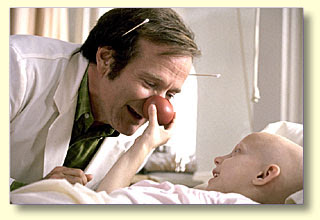 Seeing this movie again made me curious about the person who it is based on.  There actually is a real Patch Adams - not just a Hollywood invention - and his life is quite similar to the movie. He was initially a very happy kid, but due to life circumstances tried to commit suicide and ended up in a psychiatric facility.  There the realization came that he would serve humanity through medicine and he would never have another bad day.  In the movie he talks about turning the focus on how to make the lives of others better and the freedom that offered from his own trouble.  Adams continues to promote changes in the medical system and has even taken his life's work globally.


I personally would welcome more doctors with this outlook.  Those who don't just look at the symptoms, but the quality of life.  One example - my daughter had a unexpected knee injury.  First she was told 2 weeks recover, then 12 weeks recovery.  When she finally went to an orthopedist he told her to never bend her knee over 30% including on the bus.  At six feet in height, and hoping to be a mother one day, this was unrealistic and totally crushing.  A little compassion would have gone a long way.
In closing I want to share two things.  First is a link to this amazing person's website - http://www.patchadams.org.  Second are some quotes from the movie.  Enjoy!

"You treat a disease, you win, you loose.  You treat a person, I guarantee you, you'll win, no matter what the outcome."


"Our job is improving the quality of life, not just delaying death."


"You're focusing on the problem.  If you focus on the problem, you can't see the solution...See what no one else sees. See what everyone chooses not to see...out of fear, conformity or laziness.  See the whole world anew each day."


Dean Walcott - "You're not cut out to be a physician and it is my responsibility.
Hunter Patch Adams - "Responsibility?  You have one responsibility- to be a dickhead. How hard can that be?  All you to do is make sure you head is a dick and it's attached to your neck."


"What's wrong with death sir?  What are we so mortally afraid of?  Why can't we treat death with a certain amount of humanity, dignity and decency and, God forbid, maybe even humor.  Death is not the enemy gentlemen.  If we're going to fight a disease, let's fight one of the most terrible diseases of all, indifference."


"Now you have the ability to keep me from graduating. You can keep me from getting the title and the white coat. But you can't control my spirit, gentlemen. You can't keep me from learning, you can't keep me from studying. So you have a choice: you can have me as a professional colleague or you can have me as an outspoken outsider, still adament. Either way I'll probably still be viewed as a thorn. But I promise you one thing: I am a thorn that will not go away."
books drama DVD health care hospital humor humour medical movie review Patch Adams People Robin Williams