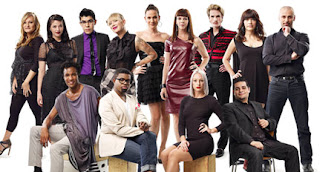 Another week, another episode.  As #3 is airing tonight I wanted to get this out now.

Episode 2 is "Night at the Opera."  One would assume this challenge a favourite amongst the various designers, but not so.  There are a few that really don't include standard opera offerings in their repertoire.  However, this talented group of designers all gave it there best.  In the end Austin was the winner and Sweet P was sent home. I honestly don't feel that Sweet P was ever a good choice for this show.  The aesthetic they are usually looking for is not hers so it really set her up to be an early elimination. 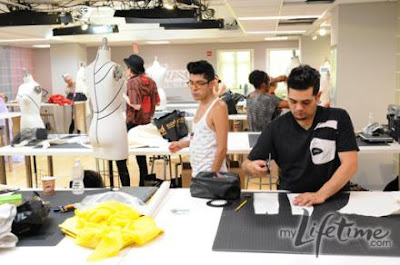 The best part about blogging is you don't have to agree with anyone else.  I personally wouldn't have chosen Austin at the top. Just a personal opinion.  That said, it's important to acknowledge that the garments may have a different effect in person.  Photos and TV really don't give a feel for the fabric the garment is created from and some of the mood is definitely lost.  Right or wrong, here's my take on the challenge.

Here are the top 5 (my top 4 plus the judges choice).  I honestly would not have included Austin in this grouping, but as he was the judges choice it belongs.  For Austin's garment (left), I personally think the black netting looks cheap and there is something wrong with the proportions.  Her bust looks small and hips look big. I would love to own Michael's creation (middle).  Black is always a great choice and the trim he used around the neck and shoulders gave it a sense of luxury and touch of interest.  Rami's creation (right) was visually stunning.  I personally love vivid jewel tones and the intricate detail work on the bodice contrasted against the flowing gathered skirt is nice.  My only criticism is perhaps the bodice is a bit busy, but the dress is definitely a stunner.

Kenley (left) - what can I say.  I didn't care for her work in the original show, but her aesthetic has really matured and she has learned to edit.  Her aesthetic is still there, but it's not over done. I'm becoming a fan.  This pink concoction has young starlet written all over it.  The large sheer polka dot bow was just enough for interest and balanced well with the full skirt.  Mondo (right) is one-of-a-kind. I am always amazed at this designer's technical skill and how, no matter what the challenge, he manages to infuse his stamp on every garment.  He wasn't excited about doing opera wear, but pulled it off regardless.  And here is the king of combining prints and colours doing an all white dress. Kudos. 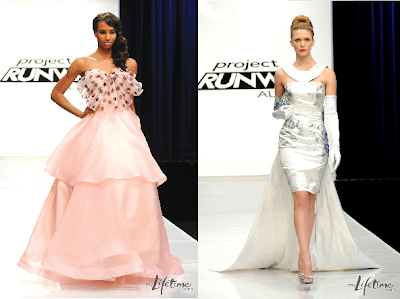 Now for those I wasn't as excited about.  These 3 are in the middle for me. April (left) has an edgy aesthetic that isn't opera oriented.  She decided to go with a bit of Corpse Bride influence and chose to dip dye the bottom of the blood red gown in black dye.  It wasn't a hit with the judges.  I personally felt all the detail work at the top was a bit confusing and more of an issue, but I loved her attempt to bring a new idea forward.  Kara (right) started by saying she didn't do opera, so she instead of trying to give the expected, she chose an out-of-the-box pastel print. I actually thought it worked for what it was.  No, it didn't look like luxurious opera wear, but I certainly could see the gown on a young ingenue who wanted to wear something original. 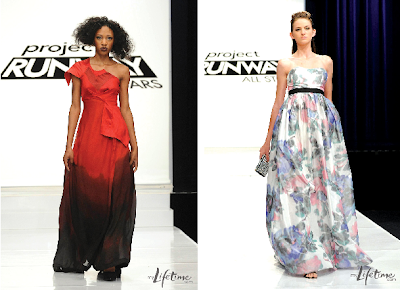 Mila's (left) was not bad, but just not great. I do like this designers and honestly don't have any real criticism, but in the scheme of things it just didn't stand out. Last is Gordana (right).   I laboured over whether to put this in the middle of the bottom, but in the end it goes here because of her originality.  I like seeing someone push the boundaries, but just wish she hadn't done the sheer leg cut-outs, or handled them differently (perhaps a totally sheer bottom with a solid mini skirt underneath). 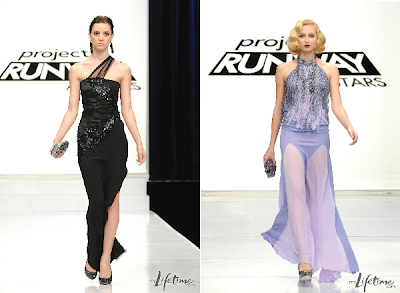 Now for those I would put in the bottom. Anthony (left) actually received some positive response from the judges.  I was surprised.  Nothing wrong with it, but in comparison to what many of the others did in terms of design and sheer detailing it just wasn't a standout.   Jerrell (middle) also missed the mark for me.  Love the colour palette, the print fabric used and the sheer at the top.  Hate the fact the silhouette makes the model look like she's wearing a maternity gown.  The puffy textured bodice only adds to the effect.  Sweet P (right) was sent home and deservedly so.  She does not design luxury garments and I have said a couple of times that her design aesthetic was not right for the type of show this was.  The colour and print are not ones I am drawn to, but I do know there is a market for this type of garment.  Just not high end.

So there you go - my overview.  It would be nice to actually be there in person to see how the garments affect me, but that's not going to happen.  That said, it's most important that luxury garments come across well on camera and TV as that is where the majority of us see them.  So there's something to be said for a review done from a distance.

Also - I found out that many of the garments are open for sale by auction after the show airs.  Have a garment you're dying to own?  See if it's available at http://projectrunwayallstars.auction.seenon.com/?ecid=SMM-AETN-00231&pa=SMM-AETN-00231.
All-Stars april design Jerrell Kara Kenley Michael Milano Mondo Guerra My Lifetime night at the opera opera Project Runway Rami Slice Sweet P