The strange challenge for Episode 3 was to design an outfit for Miss Piggy to wear while promoting The Muppet Movie.  Silly to say the least, but a chance for the designers to step out of the box. During the runway review guest judge Eric Daman tried very hard to mix it up with Miss Piggy to limited success.

Michael was the winner and I think deservedly so.  Gordana was sent home - probably the right choice.  But at least one blog reviewing this show has noted that every designer sent home has been female.  My only comment on this so far is that I felt right from the start that Eliza and Sweet P were poor choices - their point of view destined them to be at odds with the show's direction.  We'll see what happens tonight. 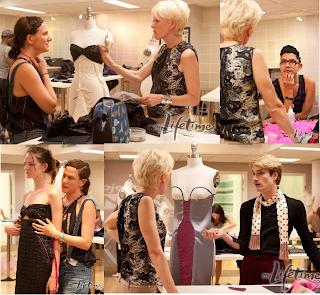 The judges and I were in agreement for the most part.  Michael's (left) was the winner over all.  While I could have seen Miss Piggy in all 4 of these designs, I think when promoting a movie, Michael's just had a lot more of the right feel - deep jewel tones, rich looking fabric and interesting detailing.  Kenley (2nd from left) again proved she has learned to edit.  The outfit is so her and the over-size puff on the head actually works in my opinion.  She is going to have to be careful though, as she could soon be considered a one note designer.  Rami (2nd from right) went for fun.  The judges loved his bright and energetic take on the challenge and as always his construction is flawless.  I loved Kara's (right) design as well and could easily have seen Miss Piggy in it.

The next set were interesting designs that perhaps didn't work for Miss Piggy or were not right for the challenge of wearing to promote a movie. Austin's (left) colour combination wasn't a hit with anyone and the big bows placed right on the hips were an unfortunate choice.  Mila (middle) created an outfit that was definitely her point of view and everyone actually found interesting.  Most could see Miss Piggy wearing it - just not for a movie promotion.  It lacked impact and pizzazz. Mondo (right) as always created an interesting garment that was beautifully made.  I think the lack of shape in the silhouette and conservative neckline probably placed it here.  As well - I think it's a bit to young in design for Miss Piggy.

Last are the four I felt missed the mark.  Anthony's creation (left) makes this poor model look so common - I don't know how else to say it.  She doesn't look like a model at all and the silhouette makes her figure look a bit dumpy. April's design (2nd from left) didn't address the challenge.  There is nothing interesting or stunning about this garment and it definitely doesn't say, "I'm out promoting a movie."  Gordana (2nd from right) just didn't get it.  Mentor Joanna Coles warned her this looked like a shapeless nightgown, but Gordana chose to ignore the feedback.  I would add the the colour of pink definitely did not pop either. She was sent home.  Last is Jerrell (right).  All I can say is what was he thinking.  I could have just as easily have sent him home.  From fabric choice to the silhouette that makes the shoulders look narrower and the rest of the body wider - it was sad.

Episode 4 airs tonight and the theme is to create a tasteful outfit inspired by the colour and flavour of a variety of gelato. Slice TV does offer videos of just the two previous episodes if you missed them at http://www.slice.ca/Slice/Watch/Default.aspx?ID=v.
Anthony april Austin Gordana Jerrell Kara Kenley Milano Mondo Guerra My Lifetime Project Runway Rami Slice television tv