After 5 years interviewing and writing magazine articles on artists, mostly in the fashion world, I have been feeling the need to stretch myself by attempting to write a full biography.  It's a yearning that keeps growing and I have been talking with several possible candidates about giving it a go.  Mostly likely this is a commitment of a couple years, so it's a daunting prospect.

With that in mind I decided it would be a good idea to start reading more books of this type.  I labored for a long time over whether to read the Steve Jobs biography written by Walter Isaacson as I was never a big Apple fan, but after doing a bit a research I decided to give it a go. MAJOR kudos to Walter Isaacson. There were tons of interviews, different projects and historical time lines to organize and he managed to do it in away that I didn't get lost.  I am seriously impressed.  As well, a round of applause for Steve Jobs and wife Laurene Powell for giving the writer full freedom to write an open and honest book and not read it before publication.  That takes courage.

This book cover Job's life from birth to death.  As well, it covers the history of the growth of technology in many areas.  I learned an amazing amount.  I don't want to take away the fun of reading the book yourself, so I just want to mention a few things that stood out. Here, first, is the publisher's blurb which really gives the best overview -

"Based on more than 40 interviews with Jobs conducted over two years--as well as interviews with more than 100 family members, friends, adversaries, competitors, and colleagues--Isaacson has written a riveting story of the roller-coaster life and searingly intense personality of a creative entrepreneur whose passion for perfection and ferocious drive revolutionized six industries: personal computers, animated movies, music, phones, tablet computing, and digital publishing."

There is no doubt in my mind that Steve Jobs was absolutely brilliant at what he did best, intuitively making a quality product desirable to the average person.  He was also brilliant (although often cruel) at pushing everyone to succeed.  Developers would tell him it couldn't be done and he would not only say it could, but give them a deadline.  They would go back to work and have a breakthrough.  Because he believed they could do it, they believed as well and made it happen.


Jobs was obsessive and wanted to control every little detail.  Sometimes this made for a hugely successful product and other times it stood in his way. It also caused him to be cruel with anyone he felt was not brilliant (in his definition).  I used to be really annoyed at the inability of the average person to be able to change the battery on an i-Phone.  While it still bugs me, I now understand his reasoning behind this choice.  There are other many small details in his devices you probably don't even notice that make them easier to pick up, handle or use that came about because of his compulsive need for perfection. He also had some resounding failures along the way because of his single-mindedness.

The book is also a historical timeline of the birth and path of so many technological innovations and companies.  I learned about Microsoft, Apple, Pixar, Sony, Disney and more.  It came as a real surprise that it was under his leadership that Pixar gained the status it has today.  The story of how and why Jobs came to create the i-Pod is there - including how the music company handed it to him on a silver platter - as well as the i-Pad, another ground-breaking achievement. 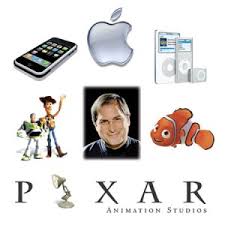 Job's choice of work space to house his amazing staff was cutting edge.  He designed a common area everyone had to walk through where these creative individuals would always be running into each other instead of being hidden away in separate cubicles.  This encouraged discussion and the sharing of ideas.  Models of the devices in development were placed on a table in a common room so anyone could handle them and comment. Jobs in particular loved the opportunity to feel these mock-ups to make sure they were just right.  All in all, less was better - less buttons, less steps, less everything.  He more than anything wanted each device to be so intuitive that the average person didn't need a manual to operate it.

Lastly the book offered insight into Steve Jobs as a brilliant but flawed human being.  While he was devoted to Buddhism, ate a strict vegetarian diet - sometimes an over obsession that was worrysome - and always had the consumer in mind when developing products, he lacked a basic compassion and true kindness in his dealings with friends, family, co-workers and employees.  He could encourage them, drive them, destroy them and warp their world around to meet his expectations.

While there is so much more I COULD share, I have tried to limit it to just a small taste.  If a personal inside look at the development of computers, animation, personal recorders and more interests you, then the book has something to share far beyond Steve Job's story.  However, I have learnt that his journey is so closely intertwined with many of the most ground breaking developments that it is impossible to separate the two.

In closing I would like to leave you with a link to a video of the famous Apple 1984 Superbowl commercial.  It was actually written off by the board at the time, but when Steve shared it with co-founder Steve Wozniak, they both agreed it was amazing and decided to run in without the boards approval.  Even if they had to pay for it themselves.  It was named the best Superbowl commercial in their 40 year history  Enjoy!