on February 07, 2012
As I will be doing Montreal Fashion Show write-ups with runway photos by Peter Jensen for Famed Magazine, this will be more of my experiences this week.  This is being done on a 10 inch notebook, not easy to work with.  The hotel itself is very old.  While it was a great price and is only 4 blocks from the venue, it really is bare bones.  SMALL room, no clock or hair dryer, no closet, no internet in the room, no elevator, you get the picture.  But the couple that own it treat me very well and the bed is that perfect balance between firm and comfortable.  The sheets are soft.  I am content.

Every day my alarm goes off at 8 a.m.as I try to get my body adjusted to the new time, but always fall back asleep until 9:30.  Still earlier than I would get up at home, but not much of a change.  The first day I was lucky enough to end up at breakfast with the 3 Kwantlen fashion design students staying in the same hotel which was a blast.  A lovely full breakfast of eggs, bacon, hashbrowns, toast and gallons of coffee kick started the engine.  Then I had to do a little magazine work letting everyone know the new issue was online.  Finally, with all my "i"s dotted and "t"'s crossed it was time to explore.

As it was already around 12:30 I decided it would be nice to just walk the streets and enjoy the architecture as well as find the Montreal Fashion Week venue.  I love it when a city has a variety of architectural styles all mixed up, especially old.  With the hotel at the edge of Old Montreal That was a given.  I haven't researched what all these buildings are, but if I do get the names I will add them.  What follows are just some random photos shot on my new instamatic.  Some were easy to get so a little better framed, some where harder as they were in places sporting one lane roads with cars parked on both sides.  Tucked in like that you couldn't step back and get a clean picture.  There is a mix of styles and some old and new 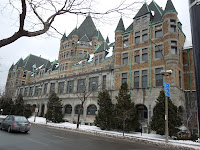 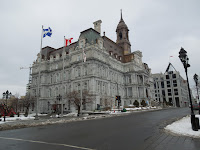 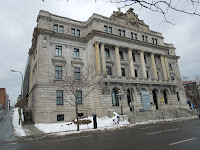 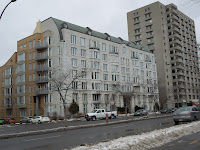 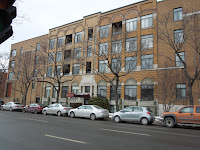 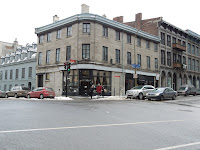 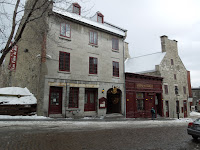 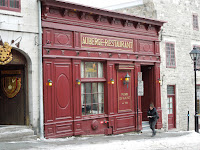 Bonsecours, the venue for Montreal Fashion week is an upscale indoor market with boutiques and galleries that has a large open space upstairs where they created a media room, a big club like lounge and a tiered seated runway with room for approximately 700 (probably about 70-100 are standing).  These 2 pictures are the outside and a look at the the long hallways inside with businesses all along the right and left. 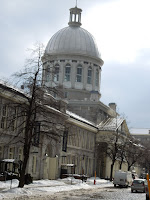 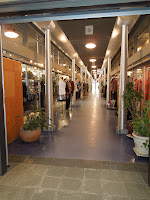 Below are just a couple of examples of the really interesting clothing found in 2 boutiques here.  The boutique on the left was my favourite.  I think it was called Lyly.  It is full of designers from Montreal, Canada and the U.S. that I have not seen and the clothing was truly creative. I tried to take a few photos inside the store to show you, but the designers did not allow their clothing to be photographed so I was lucky to get the photo I did. 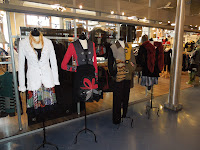 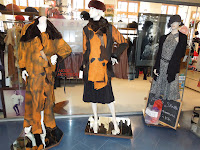 Now for some random photos.  Included are - snow in the park, a really effective bike lane and side walk combination (road is to the left of the line of cars, prominent 2-direction bike lane in middle and sidewalk on right), an interesting housing unit with spiral stairs (imagine walking up those with fresh snow on them), an example of the one of the many business entrances for basement restaurants that are so common here,  a few interesting doors, the gross tourist shops that get planted in beautiful historic areas that attract tourists along with the ugly signs posted they attach outside to those beautiful walls and the ubiquitous graffiti that sneaks it's way into every city. 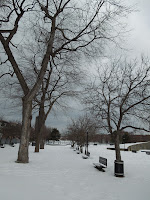 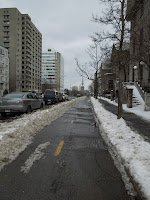 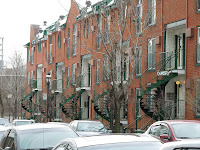 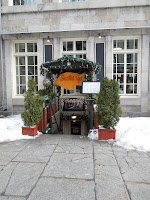 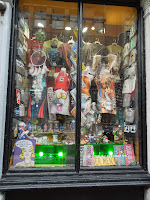 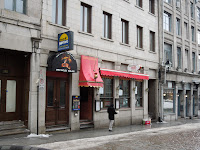 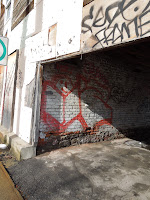 So that's the re-cap of my first few hours wandering in Old Montreal and a few blocks surrounding.  I don't know how much time I will get to do this in the next few days as some of the shows I saw have garnered interest from a few magazines, so may be back into what I love - Interviewing - by tomorrow.
architecture bike lane graffiti holiday Montreal Montreal Fashion Week old snow spiral stairway tourist shop travel vacation