Project Runway All-Stars Final Episode - The Results Are In! 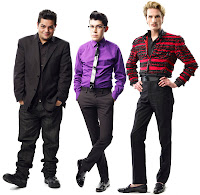 I was in front of the TV on Monday to watch the much awaited final episode of Project Runway All-Stars and had every intention of writing it up the next day while it was fresh, but was waylaid by 102 fever.  Now that I am slowly getting back on my feet, the first thing I wanted to do was finish this series.

I knew the final 3 collections would be totally different and that each of those designers would earn that win in their own way.  So I wondered what criteria the judges would use to choose only 1.  My first impression was they got it right.  At the time I wondered if that impression would still hold true after a few days of reflection and have found I still feel happy with the outcome. As all 3 did such an amazing job, I want to give an overview of the show in a slightly different way this time. 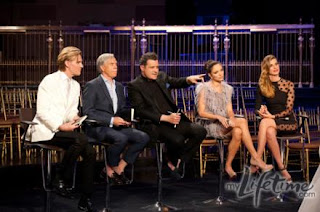 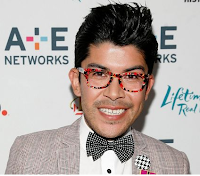 I have always been a Mondo fan and am happy to say he consistently produced good work all through the show.  In this designer's original time on Project Runway, I never really felt his final collection quit came together. It was hard to put my finger on what was missing because I was rooting so hard for him.  This time he nailed it on the head.

I remember when he was having his snit, Michael commented that from that dark place Mondo often produced his best work.  I have come to think so too. Perhaps with more time he over thinks things.  I've noticed that in other Project Runway designers in the past as well. Working under fire takes away that problem with over thinking and hones their skills in a way having more time does not.  I also saw a maturing in his work - still Mondo but a level up. On  the positive side is his artistic vision - on the negative side is the way he deals with stress.  Here are the 6 looks he showcased.

Favourite Quote - "It was really hard for me to find inspiration.  And really struggling through these last few challenges I needed some therapy, so I put all my passion into my; work.  I hope you enjoy it."

Favourite Look - #5, the Ink Blot dress with the red cuff.  Also a favourite of judge Ken Downing from Neiman Marcus.  I would buy this dress in a minute if I had the body for it!

Least Favourite Look - The judges and I agreed on this one, #4.  I just don't think the 3 pieces worked well together.

Mizrahi - "What he does with fabric really is smart and shows wit in the craft of making clothes."
Chapman - "He is a monster at mixing fabrics and ideas.  He can take a bunch of fabric and create his own textile.

Notes - Last dress almost didn't tie into the collection, but in true Mondo style somehow it worked.  The ink blot dress before brought in the note of red and the theme of dots found in all other pieces was here as well.  Mondo is so known for mixing colours as well as prints that the largely black/white theme was a surprise, but I think might be one of the reasons he won.  As the judges and mentors have said during so many shows - it's about editing. The designer offered enough ideas without adding the element of colour to the mix.

How can anyone not like Michael.  He is a heart on the sleeve sort of person, both honest and kind.  His passion for design comes from his very soul and it's easy to see how much he loves what he does.    I think the week that Diane Von Furstenberg was a judge was a sure sign of what's to come.  After reviewing his garment she told him to look her up after the show.  The way he handles knits and draping will absolutely be an asset should he chose to work with her and with a mentor of that caliber behind him, his career is surely on the rise. On the positive side is the calm with which he approaches a challenge - on the negative side is perhaps his tender nature.  Fashion is a tough business.  Here are Michael's 6 looks.

Favourite Quote - "You feel so blessed to be in there.  Those last few minutes - it's not adrenaline, it's fear.  You're working in fear."

Favourite Look - I love #4 which is a shorts set.  The fabric and design work really well together.

Least Favourite Look - #6. Although Michael is known most for draping and the judges liked this one, I just thought it didn't fit in and was not the best example of how truly great he is making this type of silhouette.

Look Created from Remnants - #6.  Okay now you know why.  An afterthought.

Hilfager - "I think it was more commercial but it was very cohesive.  When you looked at the collection you got it...You could put these in the stores tomorrow and sell them."
Chapman - "Michael is a masterful draper!"

Notes - There was a big surprise for me with this collection.  While Michael again used his go to fabric - Jersey - which he works with so well, he didn't do a lot of draped gowns. Most were more fitted day looks.  I was shocked.  In fact, the draped gown he did do was the #6 remnant challenge and it didn't fit in with the collection.  I think this was also a surprise to the judges.  Tommy Hilfager said Michael's collection was the most cohesive and suggested it as a possible winner.  All judges agreed it was more commercial.  There was one huge disagreement.  Joanna Coles said back stage she loved the prints but Isaac Mizrahi said he only liked one.  See even those in fashion don't agree!

Austin is larger than life in so many ways.  I don't find him as approachable as the other two, but cannot help admiring him as an artist.  He is full of so many ideas I think it would take him a lifetime to realize them all.  His gift is undeniable. I think his future is in gowns, both bridal and red carpet.  Fantasy is what he loves and he gives it in spades.  The fact he won the light challenge is absolutely no surprise.   Hollywood, be prepared to take notice as sooner or later a top star is sure to come calling.  On the positive side is the sheer amount of creativity this designer has - on the negative side, I think the number ideas that flood in can be overwhelming.  He wants to realize them all and gets way too caught up in trying too incorporate too many at one time. Here are Austin's 6 looks.


Inspiration - See Quote (sorry, but his explanation of his inspiration is so totally what's great about Austin and at the same time, what's not).

Favourite Quote - "This is the story of a vampire from the 18th century who has lived many hundreds of years and now resides in Williamsburg and occasionally borrows clothes from her Hasidic dandy friend."

Favourite Look - #6,  Everyone agreed that this dress didn't fit in with theme of the collection, but it honestly was pure Austin at his best.  All judges knew it would be a hit with customers as well as a sure seller.  Bridal gowns are hands down a strength for him. For the judges, many felt #2 - the Laquered Lace Dress - was the best in the whole show.

Least Favourite Look - Several judges felt the proportions of the #4 gown was unattractive.  I personally did not like look #1.  What woman would want those huge pleats on the hips?  It makes her torso and head look small and her bottom big!

Judges Quotes -
Mizrahi - "One of the more talented designers in that he can think big, epic thoughts."
Chapman - "I think he is probably the most artistic and that is what makes him wonderful.  He is an ideas machine.  You get carried away in him dream."

Notes - What lost Austin this competition based on the judges overall comments is that he did not present a cohesive collection.  There was the rock and roll influence, the period pieces and then  came a wedding dress at the end that didn't tie in with either.  Based on that criteria, he was out of the competition before he even showed his first look.  I do have one thought on this. Perhaps in the long run he doesn't have to offer cohesive collections.  Maybe this can be his strength.  I know at least one very successful Montreal designer who is known for ignoring cohesion and creates garments that inspire him each season.  His loyal clients couldn't care less, they just love what he does. 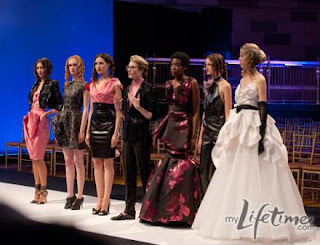 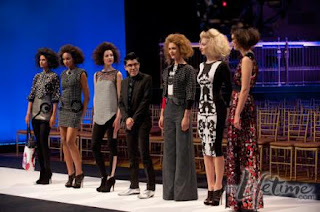 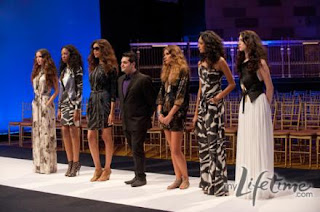 So there you have it - the season is finished.  I think each of these very talented designers will find the future bright.  The show has brought them new media attention which can only move their careers forward in this very challenging field.  April and May have castings running for the regular season of Project Runway season 10, so now all we will have to do for our design fix is wait.