Random Acts - The Bicycle and The Escalator

on August 26, 2012
I have struggled to come up with my Random Acts of Kindness on a more regular basis - again the problem of working from home - but 2 days ago the perfect opportunity arose and I almost managed it anonymously.

Stepping off the Skytrain, the transit system in Vancouver for readers not in BC, I had an older man in front of me maneuvering a bicycle through the crowd.  Usually one of 2 things happen.  Either they take the elevator to street level or they carry it up the stairs.  This man chose neither.  For whatever reason, he chose to take it up the escalator, not a popular idea with other commuters

As the bicycle really began to tilt upward, I could see that he was struggling a bit to keep it in control as he was a little bit too far ahead of it.  Bing! The light came on.  I quietly placed my hand at the back of his bike seat and applied just enough pressure that he didn't notice the difference, but I could see him relax that little bit. Up the escalator we rode until just near the top when he glanced back and noticed me assisting him.  A broad smile and thank-you was nice, but this time I was hoping to achieve this one secretly as it for some reasons gives me more satisfaction. 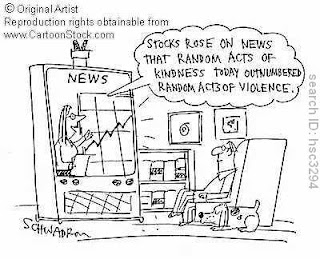 Today is a quiet day, so nothing out of the ordinary may come up, but I'll definitely be watching.
bicycle escalator kindness random acts of kindness Skytrain Vancouver