My apologies - I am still waiting on runway photos for some of the designers mentioned below.  So please check back on this one. 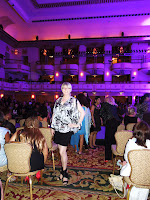 I was privileged this year to be able to attend the shows on the first day of Couture Fashion Week 2012 in New York City.  The focus this day was on designers from USA, India, Spain and the Dominican Republic. With a few exceptions, this night saw a never ending slew of beautiful dresses with lots of sparkle and shiny fabrics - from bridal whites, to soft pastels, to deep tones.  The exceptions - a classy line menswear and a couple womens wear line with a rock and roll feel to it.

The venue was the beautiful Waldorf Astoria.   Walking into the hotel you are surrounded by a soft golden glow and wrapped in the hotel's luxurious ambiance.  The hallway leading to the event was set up as a gallery for paintings.  2 side rooms were dedicated to exhibitors showcasing a wide range of products.  Then there was a separate room set up to take photos of the collections after the 4, 6 and 8 p.m. shows.  It was always packed.

The large event room had a U shaped runway with chairs along each side as well seating in the middle between the 2 runways. There were 2 photographer pits - one at the end of each corner of the U.  I do wish the runway was a little higher.  It looked to be up about only 1 foot, so you couldn't see much below the waist if you were seated further back. The exception? Floor 2 had a balcony that circled this room with a single row of seating. The view from up there had definite possibilities. For the 8 p.m. designer's show they added a 3rd runway down the middle of the U (like a square shaped W).

People were dressed for this event. Let's face it - it would be intimidating to even walk in the lobby if you didn't have something decent on.  I managed to trade off taking photos with others to get a few with me in it.  Media was handled very differently than in Vancouver.  We entered later and were seated 5 rows back - but you could move up as it became closer to show time. Not sure that was true for all media.  I suspect a few were registered differently.

The volunteers were amazing as always and took great care of me.  They even managed to move me in the front row for the 6 p.m. set of shows and when I lost my pen looked high and low until they found me a replacement.  For all you who volunteer at fashion events - you really do make the difference in my experience and I can't thank you enough for all your hard work.

What I was trying to do was include 4 photos for each designer - a photo of the designer followed by 3 images from the runway - as well as links to their website and press releases.  Hard to believe, but some of this was VERY hard to come by or not to be found.  For performers I included personal links or a link to the Couture Fashion Week performer bio page. If I was a designer showing here, I would have made sure they had a press release, bio, website, photos and more! Kudos to the organizers for including whatever they were given access to.

The lighting was tough for my little camera so many photos didn't work out.  I did manage a few of the wonderful performers mentioned below that added depth to the night.

This segment opened with a performance by a wonderful opera singer - Veronica Lovan.  She was accompanied by the Monticelli Trio (cellists). 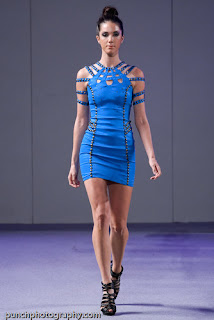 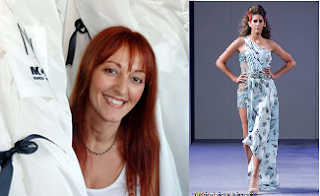 3 shows were presented in the 6 p.m. segment

These shows were opened by singers Angeles Dominguez and Reagan Richards - stunning!

This was the final show of the night and the designer created a show that was truly an extravaganza.  The runway was reshaped into 3, sort of a blocky W, and all the gowns were shown to live music and dance.  Featured were singers Cristina Fontanelli, Christine Reber, Tyler Merell, Veronica Lovan, Luciano Lamonarco, Thomas Cook and Angel Rose as well as pianist Prince Igor, the Nika Ballet Company and Dancers Ting Ting Yan & Anton Tregubov.  Probably the only segment that was a struggle to view were the ballet dancers.  They performed beautifully, but a runway is difficult choreography wise to say the least and the best view was really on the 2 big video screens.  That said, it was a lovely note during the show.

My one regret is that I had to hop a plane back home to start a new fashion week and couldn't be there for the next 2 days of shows.  Congrats to the organizers on a job well done.
Andres Aquino Couture Fashion Week Diany Mota fashion giovanni LoPresti isabel zapardiez LC couture marisu Miranda mm moda New York robert flores sushma patel waldorf astoria wendy luzon