on September 11, 2012
I found myself a weary this morning so had a hard time getting out the door. Then I first had to deal with my non-functioning camera which threw off most of my plans.  As well - a strong wind had picked up making it was not the best day for my harbour cruise.  So I just went with the flow and let the day lead me.

I am finally figuring out the subway map. Still not as proficient as I will be in a few more days, but it's starting to make sense.  I realized I was explaining the map to someone who had been in NYC for 2 months, so considering I've only had 2 days of riding it, I was patted myself on the back.  I arrived at B & H Camera and was floored.  It covers a whole block with 2 full floors of merchandise.  I couldn't even guess how many people they had there ready to help customers - it was astounding - and all couldn't have been more friendly. This store deserves it's own blog, so I will stop here.  The important note is that the only problem with my camera was a corrupt memory card thankfully. 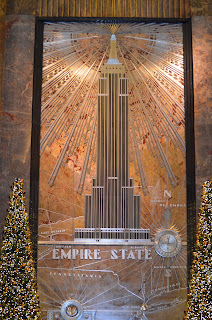 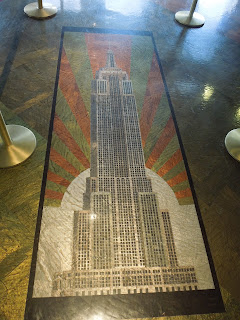 My City Pass booklet had a ticket for the Empire State Building.  As it was only a short walking distance, I decided to check that off my list first.  I have 2 thoughts on this visiting the monument. The first is that it is historical.  If that's you're bent, you should probably try and go.  I loved the wall mural in the entry way above left and the floor inlay on the right above found in another room.  As far as historic buildings you couldn't as for more  BUT this is very touristy.  Looking at the lay-out of velvet ropes in the first room, I bet the line-up during high tourist season could be 2 hours or more long. 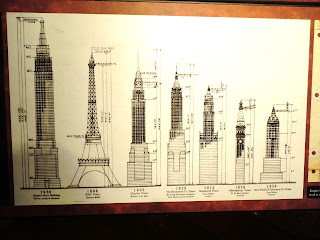 Even off season we lined up for the first elevator, then went through a museum floor, then lined up for a 2nd elevator.  At this point we were given the choice of using the stairwell for the next 6 floors which about half of us took. Not for someone out of shape. Then you're in a packed open room at the top with windows all around.  The outside walkway is 2-3 people deep on all sides and once you make your way to the front on each side, there is a grill work you have to shoot through.  So while I am not sorry I saw it once, I probably won't go back. 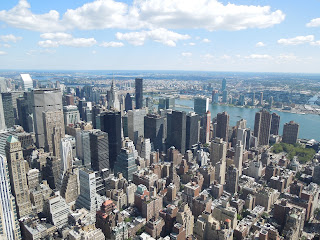 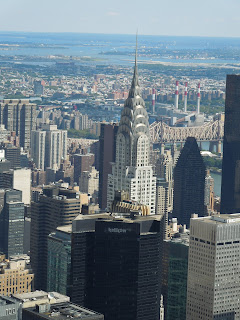 Once I managed to exit the building - the whole process in reverse but ending in the gift shop - I realized I was too tired today to really explore on foot.  First I grabbed an unbelieveably amazing rice bowl (they assemble it while you tell them what you want on it) at Chipotle Mexican Grill.  I had it packed to go as it was enough for 2 meals. Then I jumped on the Downtown Loop of the tour bus.  I learned a few things.  Soho and Noho are acronyms for South of Houston and North of Houston (actually pronounced "how-sten" here).  The Dumbo area of Brooklyn is also an acronym - Down Under The Manhattan Bridge Overpass.  Soho and Noho are historically important for the high number of cast iron buildings located here.  The strength of this type of construction was responsible for the high ceilings and high arched windows that drew artists to the area. 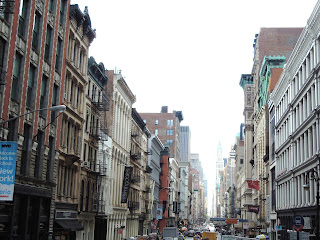 As the bus continued on, I drifted off and missed some of the information being offered by the guide.   NYC is full of interesting buildings and you could probably spend weeks just enjoying the variety of textures they offer.  Below are just some random shots from the bus.  Forgive the lack of choosing the right angle - when the bus is moving you just have to point and click quickly. 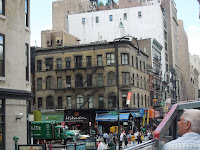 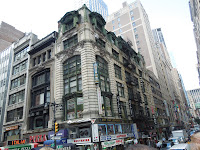 I made the decision to jump  off the bus at a site I had never heard of - the South Street Seaport at Pier 17.  It was a pier that seemed to have an enclosed mall, vendors and beer gardens on the dock, a balcony in the mall to take photos of the masted ships and city, a deck out the back to take pictures of the Brooklyn Bridge and some individuals vendors outside.  It looked interesting, but was a bit of a disappointment.  It would be a great place to put your feet up for a break and photo ops, but the stores inside were pretty standard fare.  However, if you looked across the street, there might have been more intriguing places to explore and I think they have a weekend market there. 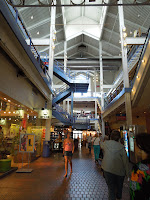 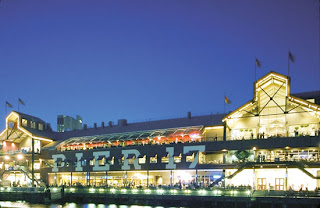 Only a couple places I found in the pier were worth mentioning.  There were 2 small artist galleries that looked like they might have interesting art if you were shopping for that type of merchandise.  As well, I liked the look and menu of  a restaurant there called Cabana Nuevo Latino.  Like all nuevo food, it takes traditional elements and offers them in new and exciting ways.  It was mid-afternoon, so not the time I wanted to eat, but it's on my list of places to dine if I get back in the area.

There was one store here I truly loved - Studio Manhattan Art + Design.  I could have spent a fortune here.  Leather wallets, coin purses, iPhone covers, handbags, etc, all with interesting graphics alongside some cards and posters.  The staff was great, the selection awesome  and I loved the variety of graphic images on their merchandise.  You can order through their website, but to get the quality and feel of the products there's nothing like walking into the store.  I had to go away for awhile and really think about what I wanted as there were just too many things and I could afford only one.  Looking at the phone covers was the first and only time I have ever really wanted an iPhone.


After this stop I truly had reached my limit, so below you will find some random photos of things I found interesting with captions explaining them.  Day 5 I am going to try and slow down a bit.  I have an appointment with a shoe designer that is right near the FIT Museum so should be able to do both, but other than that, I'm going to just let the day and inspiration lead me.  I may just have some downtown and explore the area around our apartment more.


Images below are stock  as I couldn't snap good ones from the bus.  The American Girl Place is the girlie, girlie store for the upscale clientele.  I have no idea how to describe this place. 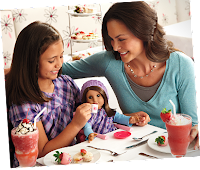 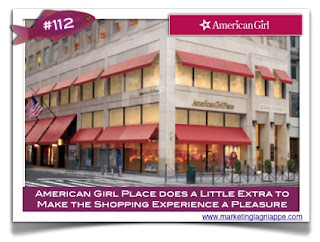