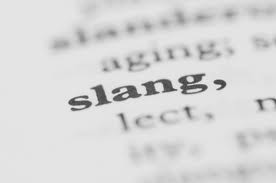 The English language is an ever shifting sand of new words and that seems to be accelerating each day.  From acronyms, to slang terms, the list keeps growing.  If a term begins to reach the level of common usage, it has the potential to attain the illustrious status of dictionary-worthy!

Fashion is no exception. After a bit of searching one night I came up with a wealth of slang terms relating to the fashion faux pas.  A few are funny; many are a bit crude.  As some of these are newer, I couldn't always find exactly the right photos to accompany them, but perhaps the description is enough on its own to bring the image to mind.  One important note is that most of these are related to ill fitting clothes, wearing the wrong size, or badly chosen (or lacking) undergarments. 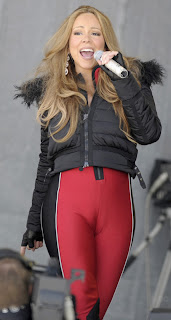 Important note - A fashion Faux Pas is NOT about a body that isn't perfect, it is about the way someone dresses.  Fashion should compliment your strong points and distract from those you aren't as thrilled with.  It should fit you properly and be worn over the right undergarments.  Fashion Faux Pas' arise when none of the above applies.

I wanted to start with the Camel Toe as that's probably the slang term most people hear first. I actually blew through life not really knowing or caring what Camel Toe meant.  When I started running a fashion magazine, I finally took notice and totally cracked up.  Some sites refer to it as a front wedgie on women.  It is blamed on too tight and/or improperly fitting pants - especially knits - as well as pulling them too high. I think a third cause could be related to the undergarment - choosing the wrong one to wear under an outfit or wearing none at all when a garment needs one.  The photo on the right of Mariah Carey is proof positive that even the rich and famous with their own personal stylist can miss the boat.  I can't image a professional stylist allowing this out on stage - so expect the singer put her foot down about what she was going to wear without realizing the consequences.

For a long time, the men's version of the Camel Toe was included in the above slang, but as always, the English language never stops changing. They now have their very own label - well two so far.  Moose Knuckle seems to be winning the battle, but Moosepaw is still in the running.  The biggest problem for men seems to be with their lycra sportswear, although men's skinny pants and the new men's leggings could change.  I love the note in the Urban dictionary for men to pull up their trousers and take a look. :) 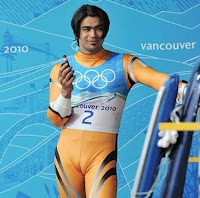 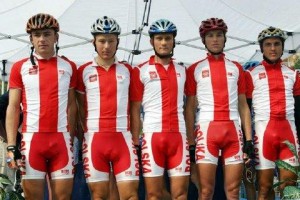 This one intrigues me as people seem to disagree as to it's actual meaning. Could be a Camel Toe or Moose Knuckle/Moosepaw. I found one source that claims it's a women's Camel Toe only split into 3?!?!?!?!?! Obviously the term  Bear Claw is still in transition and has yet to find a common definition in the main stream.

Skinny jeans for men has brought about it's own slang terms such as Camel Nose.  Supposedly when a man's penis and scrotum is clearly outlined in tight fitting clothes it resembles a camel nose. Really? Oh well, that's slang for you. This term is also not settled yet as some use it for both sexes referring to the cleft produced like in the terms above. The two pictures below include a photo of someone on the street in regular pants and also one of an actor playing a part. Coming from the world of dance I can only say to the actor - you're supposed to be wearing a dance belt! Whoever costumed this show is surely aware so maybe he forgot it at home that day. If leggings for men become common street wear, the industry will need to educate men about what needs to be worn underneath. 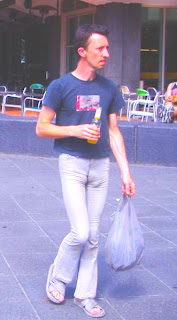 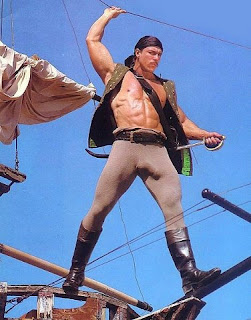 I cracked up when I found this term!!! Unfortunately both my husband and my oldest son are guilty and nothing I say has ever been able to change this. Some guys just have sensitive feet and love their socks. Not much more to say as honestly - a picture is worth a thousand words. Just say no to Senior Citizen's Foot. 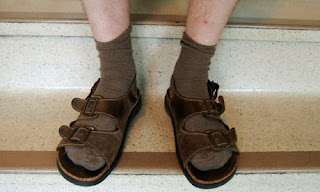 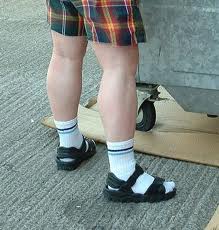 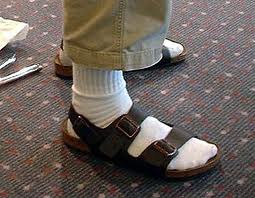 Whale Tails came about with the popularity of low rise pants for women.  I don't care how good the fit, when you bend over it is going to pull down.  Some manufacturers have started to make these pants ride a bit higher in the back (then lower in front) which helps immensely and the addition of stretch has made a big difference.  But there's still a lot of bad options out there.  One response from the lingerie industry is to make it a fashion statement.  The two top pictures show the unattractive accidental Whale Tail. that we see all the time.  The bottom photo shows it being used as a fashion statement where it looks planned.  If you're going to show it, at least make it look like it was on purpose. 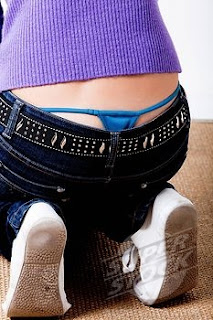 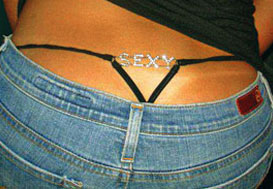 I never hear the term Muffin Top without feeling a little put out.  For years I heard men's overhang refer to by the affectionate term of Love Handles - something you could grab onto.  It had a non-threatening and warm ring to it.  When low rise pants for women became the norm, a new term was coined - Muffin Top. Doesn't sound as warm as fuzzy does it?  To be honest, the look is not attractive on either sex, so why do women have muffin tops and men have love handles.  Women of fashion - perhaps we need to level the playing field on this one and coin a new phrase for the men.  Either way, if your pants create an overhang when you button them - DO NOT wear a short t-shirt with it.  Not a good look on anyone. 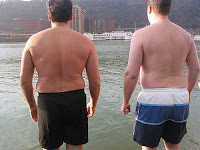 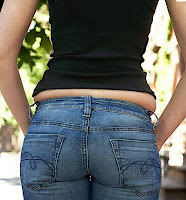 Another new one to me.  If you have excess fat around the middle and squeeze it into pants that are too small, the result can be that it is pushed up and together to create the look of cleavage or a behind. I think this is probably related mostly to women because of child birth and the way we carry excess weight.  We all have body parts that aren't perfect and fashion is about wearing the things that showcase your strong points and detract from those we don't like.  The secret here is two-fold. Try to wear clothing that fits you properly around the waist and wear a loose, longer shirt that drapes nicely to at least crotch length. 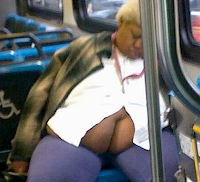 Our desire to shorten everything into acronyms comes into play here.  This used to be called Visible Panty Line, but has now been shortened to VPL.  Everyone is pretty aware what this common phrase refers to and if not, the pictures tell the story. 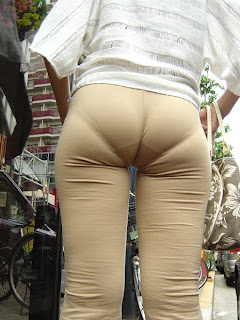 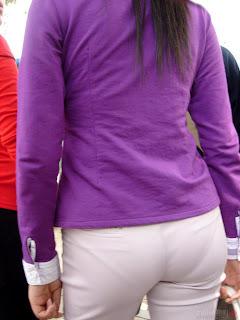 The term Plumber's Butt has been around for as long as I can remember.  Ass Cleavage was new to me.  Not sure yet if it is replacing plumber's butt or if the two will be used separately - one for women and one for men. Either way it's again not a great look.  Comes about for the same reason as the Whale Tail.  For women - if you want to wear low-rise, look for those that cut slightly higher in back and have some lycra in their make-up. If they are really low, then probably pair with a slightly longer shirt.  For men - make sure you are wearing the right size and that your shirt is long enough in back. Belts are probably a good idea, but not a total solution. 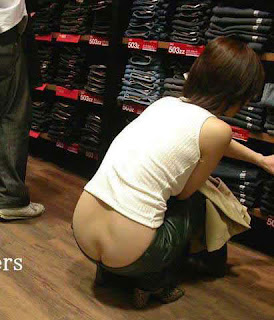 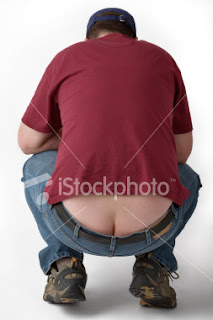 Another new term for me. Often this is more of a problem if you have very large breasts, but the photo below prove that anyone can over squish their assets.  The term refers to when the woman wears a bras that is so ill fitting that you have a second set of breasts spilling out the top.  This is not referring to showing a lot of cleavage.  This is one I had trouble finding just the right photo for, so hopefully the 2 here give you a good idea. 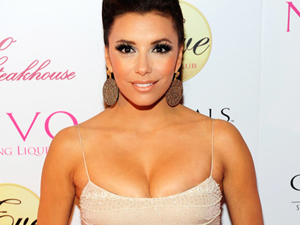 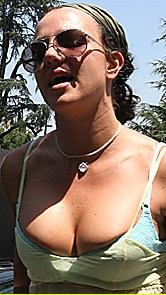 I am putting these 2 together as they have pretty simple explanations and I only found one photo of the second.  Sleavage is when you are wearing an ill-fitting bra or swimsuit top and your breast spill out the side of it creating small, extra breasts under your arms. While more visible in a swimsuit top, this could also be apparent in certain tops and gowns that are barer. In UnderCleavage your breasts spill out the bottom of your bra or swimsuit.  The picture of Heather Locklear below was the best I could find. Most likely this issue would not be visible with a bra as it would be hidden by your clothing - so swimsuits would be the culprit in visible UnderCleavage. 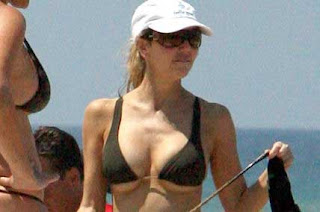 Well, that's the extent of my current research.  I suspect there are many more new slang terms coming out each day and these are only the beginning.  I want to again remind everyone.  Fashion Faux Pas's are NOT about an imperfect body.  It's about wearing the wrong size, the wrong undergarment, the wrong silhouette for you.