Secrets From My Mother's Kitchen - Scalloped Potatos and Scalloped Corn

on February 25, 2013
Sooner or later I am going to have to start letting go of some of the multitude of cookbooks and food magazines I have accumulated over the years.  Unfortunately, I still have a soft spot for these publications and have many goods ones. Truth be told - there comes a time when you just do not have enough days in the year or meals you want to cook to make good use of them.

At a birthday dinner yesterday, I went for simplicity because I was so swamped.  The menu ended up with a simple Baked Ham, Scalloped Potatos with Leeks and Mushrooms created by surfing the web and seeing what I liked best, Green Salad, a simple Vegetable, Rolls (Wheat and White) and Dairy Queen Ice Cream Cake. The beauty of this is most prep was done ahead of time and the only actual recipe was the potatos. I could relax until 30 minutes before we sat down to eat.  Usually I'm too busy to enjoy company for more than a few minutes here or there.  This day I had lots of time.

Although the Scalloped Potatos received great reviews at the table, I personally found them a bit rich - the heavy cream seemed to overpower the dish.  After we had eaten, I was talking with my mother-in-law who is 88 about old recipes and recalled a very special cookbook I owned. When I moved to Canada many years ago and took my first job, the person training me was selling a self-published cookbook of her mother's recipes.  It was a charming edition with all lettering and illustrations created by hand.  I copied a few pages so you could get the idea.

What this cookbook has is more of a traditional style, but updated a bit from very old recipes here and there.  New ingredients such as Red Wine Vinegar and Asparagus have found their way in. When I grew up in the Mid-West, seasonings were limited to salt, pepper and the bacon fat you saved to cook everything in. Red Wine Vinegar would have been considered exotic with a capital E. and what in hell's name was an Asparagus ?!?!?!? I thought of this cookbook because the Scallop Potato recipe was much simpler and I actually really loved the idea behind it. The only issue I had was that I couldn't seem to consistently end up with a smooth cream sauce.

When my mother-in-law asked for the recipe I used last night I was honoured, but at the same time decided to give her both I gave her both. She was also very drawn to the simpler version.  The 2 recipes I have included below from this cookbook, take us back to a time when cooking was more basic. The potato recipe might take a few tries to get the technique right, but I think it's worth the effort as I have decided to resurrect it. I will probably still add the leeks and mushrooms (and maybe minced fresh garlic) next time, but am determined to make this my own. Sometimes simple is best. 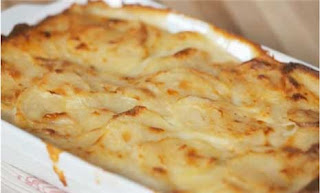 I love the simplicity of this recipe and have used a few times although struggled to get the flour/milk to work perfectly. No fancy sauces to make ahead of time. No hi-fat cream.  Just old-fashioned goodness.  However, I did like using 1 large leek instead of the onion (remove dark green part of stem, quarter lengthwise, rinse well, pat dry and slice) as well as the addition of a small box of mushrooms diced. Then I sauted them ahead of time until very soft.

Preheat over to 350 degrees.

Thinly slice onions and potatos. Combine salt, pepper and flour.  Prepare baking dish.  Create 3 layers alternating onion and potato, sprinkling each potato layer with 1/3 of the flour mixture. Warm milk in microwave or on stove top (this is an important step) and gently pour over.  Cover and bake for 45 min.  Remove cover, sprinkle on cheese and bake 15 minutes longer.

Note - If you need to make a larger recipe, you will also have to increase the time it is baked covered. My family adores potatos so I use 1 medium potato per person at the table. A lot more than the average meal probably. It might take some time to figure out your family's requirements. 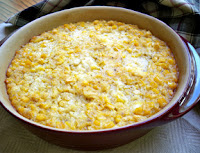 I grew up with Scalloped Corn, but have never made it for my family.  They have an aversion to canned cream style corn, so have always been hesitant, but after yesterday the gloves are coming off. I thought the baking dish was originally placed in a pan of water to cook as this should be custard-y, but that step is missing here and I don't see it in others in searching the internet. Also, recipes have changed to include a variety of ingredients and toppings. I don't remember Scalloped Corn when I was young having cheese or a crumb topping, so not sure if if I will include those items the first time. I am also going to use fresh corn even those most recipes suggest canned.

I may try and do the recipes in this cookbook from one end to the other and publish the ones I think best.  As this was never officially published through a trade house, it might be fun to be the torch bearer to make sure they are not lost except in the family's traditions.
casserole cookbooks heritage Let's Talk Food recipes scalloped corn scalloped potatos Secrets from my Mother's Kitchen