on March 30, 2013
Check out recaps of other episodes by clicking the the Project Runway tab. 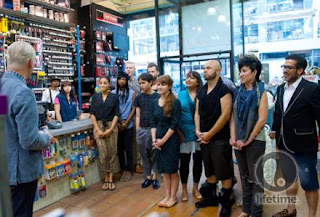 Episode 4 of Project Runway Season 11 starts with the designers entering the studio. Red candles have filled the air with a delicious aroma. They are 2-in-1 Candles provided by Glade, a combination of Hawaiian Breeze and Vanilla Passion. They are also clues to the next challenge. Tim Gunn shares this is one of his favourite challenges - the Unconventional Challenge - and their materials will be sourced from a flower shop. Then comes the twist. We knew there would be a twist.  Heidi Klum enters and shares she likes it more complicated. She loves the idea of hard and soft combined - flowers and hardware.

So the Unconventional Challenge this season is also the 2 in 1 challenge (a nod back to the candles if you remember). Each team is to make a cohesive line of 6 looks using flowers and hardware.  Each look does not have to contain both, but the overall look of the line must be cohesive. The budget is $2500 and they get 30 minutes to shop at each store as well as 2 days to complete the challenge. Guest judges this week are fashion blogger Leandra Medine (Man Repeller) and the one and only Bette Midler. 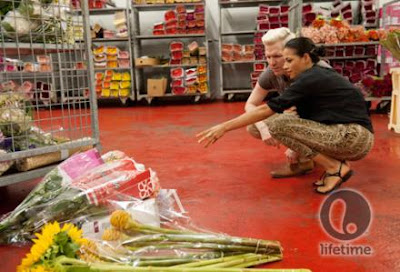 An attempt was also made to balance team numbers. Dream Team was allowed to choose 2 designers from Keeping it Real - they wisely chose Stanley and Layana.  Keeping it Real was then allowed to take one of theirs - they chose Michelle, one of the strongest designers from that team.  She wasn't happy to go. Again, despite her great work she ended up in the bottom team as this week Dream Team with their new infusion of talent easily rose to the top.  I have to say yet again, the team challenge is interesting in many ways, but when you have top designers consistently stuck on the losing team it is problematic. 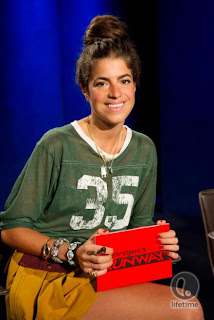 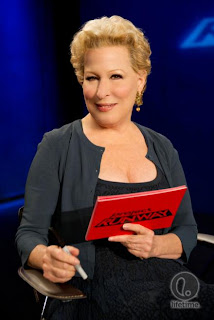 Stanley was one of the best things that happened to this team. He wisely suggested whatever they wanted to design individually should follow a basic theme - 1950's Dior New Look. It worked! The judges loved this collection. It had a great colour palette and was whimsical and beautifully made. Other adjectives offered were modern, timely, fresh and elegant. There was a true artistry in the final garments that charmed everyone. The win overall went to Samantha who captured foliage under an mesh frame. The other dress I felt could have won was Layanna's. Pastel flowers on the beige cage skirt created a soft,feminine look that belies the materials used. I do want to mention Benjamin this week. Although I doubt he will be standing at the end because of the pressure of the show, I really like him as a designer. This week he made his own hand loom and wove part of the fabric he used from string.

Richard was hilarious when he suggested a theme of Ru Paul meets Gilligan's Island. Unfortunately with only this to guide them, their collection had no cohesion. Michelle could see this coming from a mile away. She noted, "Every garment looks like it was made by a crazy person and none of them were staying in the same hospital." In the end she was the one to come up with an idea to tie the looks together - dresses from the decades. It redeemed the collection in the judges eyes in terms of cohesion, but the collection was just not in the same league as the Dream Team's. Although the judges did not assign a loser this week because of the quality of the designs, they had to send someone home and Joseph Aaron was chosen. Personally my bottom 2 were Danielle (what woman wants a big decoration at the waist making her look pregnant) and Amanda (just boring compared to the others). I thought Joseph Aaron's had an interesting take on the challenge, but not my call.