on March 22, 2013
All runway images by Peter Jensen Photography

Great set of shows on day 2!  I wasn't sure how to do the write-up today as I couldn't find my notebook and press releases at first, but in one final search they miraculously appeared.

My attention was not as focused yesterday as I seem to be coming down with the evil cold that is going around, but I still enjoyed myself and saw many inspiring looks. Add in great friends such as Jennifer and Shaughnessy of Jennyfleur Loves Boutique, Felix of Yuki and Bee, Rony of Darpan Magazine, Josh Langston of Social Life Magazine , amazing designer David Jack, blogger Samantha Sito, new friends just met and many, many more. You get the idea. Just a lot of fun!

NOTE - Again I want to make it clear that I am only writing up a few designers each day that caught my eye for one reason or another. It's always hard to select who to cover as every designer puts their all into creating a show for the audience. Every person looks at fashion differently, so I encourage you to go to the VFW's list of designers with website links and check out the other brands that showcased each day. There's some amazing work not covered here to surprise you.

Anyone who knows me knows I am a huge fan of fashion design student shows. While fine detailing, proportions and tailoring skills may not be the same as a designer with 20 years in the trade, they bring new ideas and concepts to the table. Lasalle College students were first down the runway with 8 collections (6-8 looks per student). The theme this year was Complexity. My favourite 2 collections over all were the ones by Jesper Annerstedt and Oriana Kesster, but every designer offered a refreshing look at what the future of fashion could hold. They should all be proud of their work.

The garments by Israeli-born/Central Saint Martins trained designer Gita Omri stood out for their unique aesthetic. Having international designers at VFW gives us to see what is happening in fashion around the globe - something that brings me back year after year. This collection was wearable, but yet just that little bit unusual at the same time which I loved. No surprise as it was inspired by the Tim Burton film "9" - "...the story of 9 little rag dolls after machines have killed all the humans. As the film unfolds, it is learned that each of the dolls is a piece of a single soul...The dolls must pool their different strengths and characteristics in order to remain alive."  The combination of textures, silhouettes and heavy decorative stitching produced an intriguing collection of looks. I hope to see this designer's work again in the near future.

Behind me last night were 3 wonderful Blanche Macdonald representatives - Peggy Morrison, Lisa Gellert and Melanie Watts. It was when talking with them discovered Evan Clayton is former student of the school. In the two years since graduation, he has gone on to make waves in the fashion world. F/W 2013's collection was call The Fall of Joan and "...explores the decay fo the modern superstar through the eyes of the fabled Joan of Arc during her last days."  After reading this in his press release, I knew we were in for something special. Then his great video hit the screen.

Clayton actually gave us two runway shows this evening. The first was a wearable section with great tailoring and interesting detailing.  I would love to own the black jacket in the image above - second from left - with large collar and hand painted white trim.  The other look I covet is the white/black suit in the image below on the right walking away from the camera. His wearable looks are strong and sure to attract a devoted clientele. 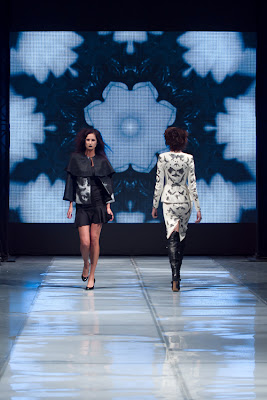 Then there was his totally left of centre "Lady Gaga" wear - edgy and theatrical. Fabric and mask covered faces, bolder statements and a theme of red and black - the departure took everyone by surprise. One model even took off her mask and let fake blood drip down her chin to splat on the floor, droplets that future garments dragged through. It was a hit with the audience to say the least. Clayton brought the drama and the audience responded!  He is someone I will definitely be keeping my eye on. 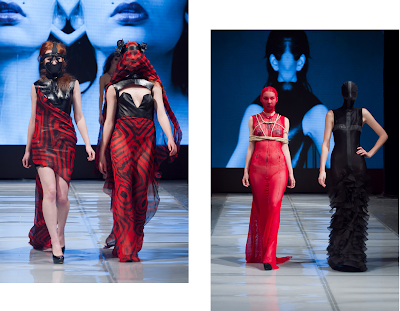 I was charmed by the last designer - Vancouver based Dandilion Wind Opaine. Most designers need to show their ready-to-wear collections - just part of the industry - so it's always a breath of fresh air to have someone offer a conceptual runway presentation. Most were not that wearable on your average day - although there were a few exceptions. These looks were all about creating a an interesting production and it was not only a great surprise, but a huge hit with the audience.

Designer Dandi was born and raised in northern British Columbia. She is a musician, art director and costumer whose work has appeared in Dazed, Nylon, Playboy and Elle. This show was dedicated to her grandmother who taught her how to knit and crochet. With a video of a tree-lined street during a snowstorm setting the mood, models walked the runway clad in a wide variety of looks that incorporated knitting, crocheting and macrame; unusual head pieces; and props such as gourds, scarves and shapes created from ice.

One set totally new to me was of 4 models with their heads linked by braids who had to inch down the runway, turn and leave as a unit. Difficult to say the least.  I loved closing the day's events with fantasy and hope you enjoy the images! 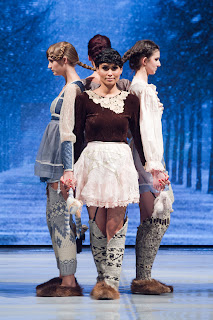 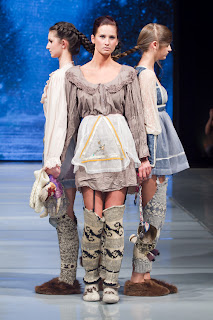