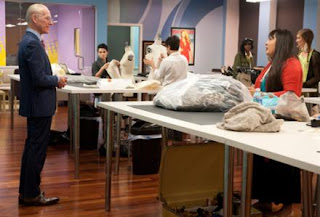 This week we see the final challenge deciding who will compete at Mercedes Benz Fashion Week. Heidi Klum clearly tells Michelle this is her do or die moment, "You really need to wow us to prove we made the right decision in giving you this chance."  Michelle tells the camera this changes nothing for her, "Every challenge has been a do or die challenge."  Tim Gunn reminds them that this is the biggest challenge of the season as it will show the judges what they can achieve. Each is again assigned a sewing assistant.

The world is their oyster this week - well, for everyone but Michelle. 4 designers are sent to Europe to get their inspiration and their sewing assistants will travel with them. Layana (with Samantha) is sent to Barcelona, Patricia (with Kate) to Paris, Daniel (with Amanda) to Berlin and Stanley (with Richard - what a bad pairing) to London. Michelle (with Tu) stays in NYC, but Tim reminds this is a fashion capital. Daniel has never been out of the country so is extra excited. Being born and raised in the U.S., I understand this, but do find it sad.  America is such a large country that many never feel the need to explore the rest of the world.  I know several who have never even had a passport.  Hopefully this episode will inspire them to open their eyes to what's out there. 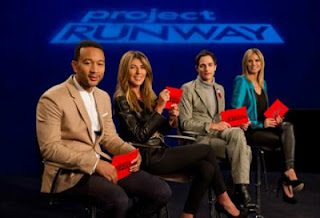 The challenge this week is to create a high end runway look that is creative, spectacular and inspired by the city they visited. The budget is $1,000 and they are told the expectations are high. They will have one full day to be inspired by the city, sketch and shop for fabric. Then they head back to NYC to work. Heidi best sums it up as, "You go there, you suck it all in, hop back on a plane and start sewing." When they return they have one day to complete the look.  Guest judge this week is singer/songwriter and nine time Grammy winner John Legend. 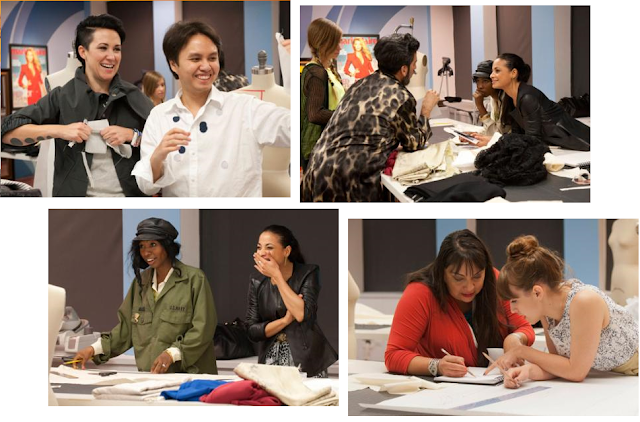 Stanley was one of the top looks in my opinion. He was immediately inspired by the architecture in London, especially the Tower of London. His eyes kept floating up, "The further I go, the darker the figurines get and the darker the windows get. What if there was a woman who lived up there? What would she be wearing?"  So he went for dark. For fabrics, he wanted to include an amazing silk Chiffon with leather sequins.  At 140 pounds per meter, this sucked up $850 of his budget and ended up being just an accent in the final design. 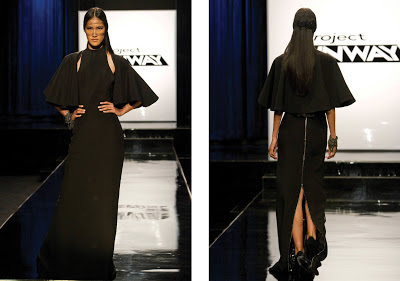 In the end I think Stanley made 2 mistakes.  First was to hide the most expensive fabric away where it hardly showed. The chiffon with leather sequence was tucked where it just peeked out.  I personally wish where it demanded such a large part of his budget, that it had a more prominent place in his design. The judges did not agree with me, they loved it just the way it was. The second was to not have the model remove her cape on the runway.  It was when he was showing the gown afterwards that they were able to see the surprise low back and long zipper from the small of her back to the top of the slit. Judges comments include - absolutely love this, the shape is elegant and sleek, I think you turned up the volume, strong and simple, captured the elegance from the front and a surprise from the back and it has the mystery of London - Sherlock Holmes. 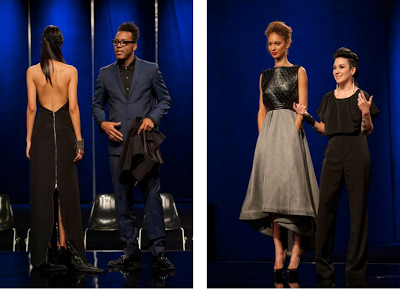 Michelle was my favourite.  I have loved her personality and design aesthetic from day one and this hasn't changed. There is just a very open and wild take on the world here that draws me and she is always open to change and advice, but runs it through her filter and morphs it into something uniquely her own. She was in a very bad space emotionally at being left behind while others took flight. While she and Tu travelled around NYC, what inspired her was the old buildings sandwiched in between new ones - often reflected in their glass windows. The stained old chimneys and furnaces particularly drew her eye. In the end she made a tailored, strapless wool cashmere dress and then "dirtied the bottom" edge to reflect the stained elements that were her inspiration. Over this was a quilted leather breastplate she laughingly referred to as Avant Turd. God I love her sense of humor. The cashmere fabric took up 1/2 her budget, so good or bad, there was no room for error as there was no money for an inch of extra fabric. 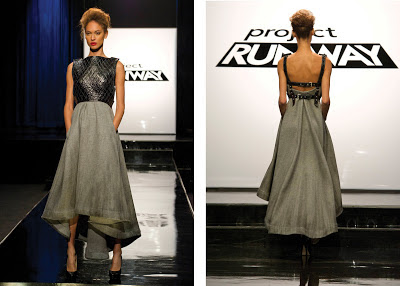 I personally thought this was the most innovative design - simple and yet totally out of the box.  Not all judges agreed on this. Heidi in particular didn't like the bottom saying it looked like a dirty horse blanket, but I think it fit in perfectly with her inspiration.  Remember - this is not ready to wear, it is supposed to be inspired by the city. Judges comments include - this is a comeback, you captured this city's spirit, I am thrilled you turned it around, I love this, the combination was very unexpected, the risk paid off, I see NYC in the dust on the bottom, it has that NYC quality. The judges also loved the back strapping and the fact she did the quilting herself. 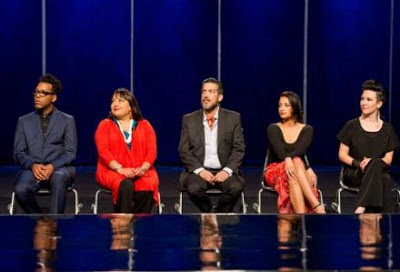 Daniel is such a lovely person, but I have to admit I'm just not a fan of his work.  Week after week he puts out yet another jacket and no one calls him on it. WOW!  I am sure if you get up close and personal with the jacket in particular it is probably exquisite, but when it comes to innovation, I just don't think he has it and supposedly this show is about it. He loved the architecture in Berlin and was inspired by a the shape of a geometric, modern building. Amanda did her best to push his aesthetic to a younger hipper audience and he needs to thank her for that.  He decides to use leather, suede and silk to fashion a bias cut dress (always a challenge) and a white jacket. When they hit the local fabric store there is of course no leather, so he has to use white vinyl Pleather.  He takes it to the next level by creating a pair of matching boots that actually pull over a pair of heels. 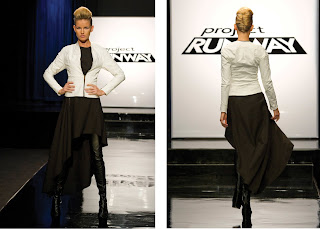 All the judges loved it calling it phenomenal and saying things like - love the design, the boots pull the whole look together, love the drape of the jacket, very brave to work in white Pleather, you pulled it off, a young and modern hip girl, I see the inspiration of Berlin's architecture and hard and strong. They were unanimous in their praise. I have to agree in that his workmanship is always first rate, BUT if anyone else had put jacket after jacket down the runway they would have lambasted them. He lacks that forward thinking, original point of view that they are supposedly encouraging on this show.  I understand why they like this outfit, just don't know why they don't question his continuing to offer them another jacket. 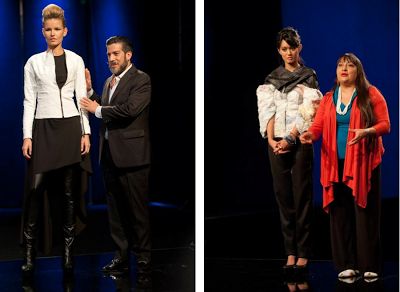 Patricia is such a lovely, honest soul and so proud to represent her heritage, "I can really give something new in the eyes of the natives that will show the strength of who we are as people." Her joy at being in Paris was infectious and the fact she looked at something beyond the romance of the city was wonderful.  For her inspiration, it was the layers of street graffiti painted one over the other on the walls, "I am really drawn to the wall art. I'm starting to see more texture in the layers of history and can totally create fabric with all of this graffiti.  I'm not doing the romantic, whimsical Paris. I'm doing the true, gritty, make-a-statement Paris." What a cool take! True to the textile artist she is, the final vision is never clear from the start so she selected too much organza chiffon and had to put quite a bit back. She layered the different coloured fabrics to create the textile for the top that hinted at, "...installation graffiti painted with textiles." This was finished off with a pair of black pants and collar. 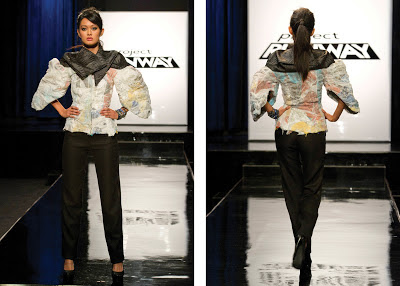 The judges did not love this which surprised me.  Again, this is all about originality and creating something unique. Instead of applauding her look at a different side of Paris, they questioned her not seeing the romantic side. Her assistant Kate was impressed saying, "I think Michelle's saving grace is her uniqueness. No one has ever seen a textile like this before."  Although he was not sold on this look, Zac was the most positive of the judges commenting - trash couture, I appreciate your textile development and painting with fabric, but a bit messy here. I'm always happy to see someone who takes risks. Heidi did feel the top was special, but felt it needed something more interesting to go with it than a pair of black pants. The guest judge felt it just didn't work. Nina was the harshest - I am a little underwhelmed, it looks like cotton candy gone wrong or a collage with paper mache and I don't feel Paris at all. 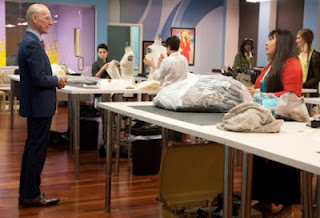 Layana was in the bottom this week and sent home one elimination shy of showing on the runway. It was tough as, although the judges didn't like her design, she was in love with it. While traveling in Spain, the passion of Barcelona, the stunning architecture and the beauty of all the tile detailing drew her. What she wanted to do was capture the old beauty of the city in a modern design. Initial drawings included a jacket out of leather that she would rework to reflect the intricate designs she saw, but there was no leather in the store. A lace that mimicked this design was available, so plan B was put into effect.

I actually love the stained glass look of the jacket created out of lace and piping.  I would wear it in an instant. There were a few mistakes though in meeting this challenge. The high collar and black vee that filled in the front needed to go.  I could see women wearing it as designed, but it made it look a little too staid on the runway for this challenge. The peach coloured ruffle-y cuffs peeking out were also bizarre. They had nothing to do with the rest of the design and were actually really distracting. Everything else was hard and sharp - so they rubbed as they didn't blend enough for a hard and soft look. The other mistake she made was saying the word OLD on the runway. The judges responded badly to it. Comments included - the sleeves are a big eyesore, this looks so old fashioned, I am shocked, she has no sex appeal, when you go to all this effort and have such a great model the women should look hot, go back to your roots with balance between edge and femininity as it got buttoned up here. Zac did feel she made some smart choices in the material.

To see any of the images in a larger format go to RATE THE RUNWAY.