So instead of three, we have four designers this week preparing collections for Mercedes Benz Fashion Week. The sad truth is, only three will get to show.  I know the other designers are probably not happy with this, but I am totally elated Michelle is a part.  I have felt since about week three that she is the bomb, so glad she was not sent home. That said, I always find it a cruel twist when they have a designer prepare an entire collection and then eliminate them without letting them show it.

Tim Gunn is both proud and excited as he has held their hand through this whole process.  He admonishes them, "Only one of you can win, so each of you have to throw everything you have into the development of your collection - really knock everyone's socks off."  Heidi Klum adds, "I know each of you are exhausted, but now is not the time to rest on your laurels. I wish you all good luck.  Work hard, give it your all and blow us away."  Then they are told they have a budget of $10,000 to create a fall collection of 12 looks.  Stanley and Michelle each acknowledges the other's talent. Patricia is noted as the only one who has never won a single challenge. As this week is only to decide which 3 will show, only the three regular judges took part - Heidi Klum, Nina Garcia and Zac Posen.

Four months later Tim begins to drop in on the designers. First is Patricia who lives in Taos Pueblo, New Mexico.  She first acknowledges her family and support group - all are singers and dancers - as well as the place she lives,"Being raised and taken care of here gave me the strength to go out into the world. People enjoy our celebrations and culture, but don't want to be intrusive. That made me think of contemporary clothing. I wanted to try and emanate my culture as something fun and playful instead of stagnant." For inspiration, she looked to trees.  Leather mesh, horsehair and hand felted wool were incorporated.

Then it was off to Portland, Oregon to see my favourite designer - Michelle!  She admitted she felt very alone and misunderstood when she first came home. From this darker head space came the idea to base her collection on wolves. "Wolves are also often misunderstood and called things like bloodthirsty. It's actually not true. They are loyal, loving pack animals that treat the other members of their crew like family."  Her inspiration then took her to a lone female hunting wolf.  The only concern was that she was only 1/3 of the way finished and there were very few weeks left. Tim was impressed and encouraged her by saying no matter what the outcome, the collection was totally her and she should feel ecstatic about it.

Austin, Texas was next on the list where we saw Daniel with the worst mop of hair I have ever seen. One blogger compared it to a Chia Pet.  It was very unflattering. Daniel shared about being little in Puerto Rico. He was Hispanic, gay and the source of much bullying. The love of his family and friends supported him and this was his now or never moment. His inspiration was a bit of a mishmash - Salvador Dali, the nebulae around planets and the architecture seen on his trip to Germany.  Tim was worried at the diversity of inspiration, but Daniel was confident. The palette was made up of nebulae colours - cream celestial blue, red and black and he added a stingray material to give the collection an edge.  One collar was hand molded at the window using just the heat from the sun.  There were pieces Tim loved and pieces he found distressing, so a mixed bag. I noticed one outfit in the background that had a bulls-eye on the crotch. It is small here but you can see it just above Tim's left hand. Strange!

Last but not least was a visit to Stanley in Los Angeles, California.  He had only taken a week off and went straight to work. We learn a little bit about his past - he made all his nieces Easter dresses, prom dresses and homecoming dresses and this show was the 3rd time he auditioned.  Stanley shared, "My line is reminiscent of the 60's, Renaissance Spain and clean, high end women's looks, so there's a lot going on. If you peel back the layers, I think it's a strong, cohesive collection."  Tim is concerned that some of the fabulousness will need to be edited down and questioned a few of the palette choices, recommending things be combined differently. He also notes that in his previous trips all 3 designers mentioned he is the only one they feel they have to reckon with - not the best way to inspire someone to rethink things. 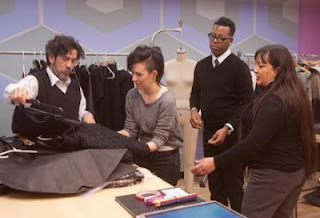 Arrival in NYC was a time of mixed vibes.  Michelle was way ahead of the game with little left to do and was ready to bond as a group. "We need each other right now. We need to give hugs and support one another for these final collections." She lovingly called Patricia Moma-Glama after looking at her collection.  Daniel called it the Superbowl of fashion. Thank goodness he quieted the Chia Pet hair. Patricia was the same as always - excited, nervous and happy to be there. Stanley was in trouble from the start. The person he hired to do some dying ruined $700 worth of fabric and he had to start over. He had tons of unfinished work and all the designers were concerned.  Each was again given an assistant - Daniel and Samantha, Michelle and Amanda (her absolute #1 choice), Patricia get Layana (it is was surprising how well this worked out) and wait for it............The designer with the most to accomplish gets Richard who is a lovely person, but again mostly known for knits with little experience working with wovens.

When it came to judging the 3 looks presented - no one received kudos straight across the board, but Michelle definitely had a strong collection and was in. She came the most prepared with the least to finish, she had a strong story line and her collection was cohesive.  Her 3 looks included a sweater with wolf theme created with computerized knitting, a crushed silk dress with neoprene skirt and a black coat with modular clips and a great grouping of bags that could be clipped on at will.  Judges comments include - I like this because it's unusual, this is what Project Runway is all about, I wish something would pop with a little more color, need a better connection between the hair/makeup and the outfits, I feel like you've created a universe here, I think you've thought about merchandising, all is wearable, a clear vision and the little engine that could that keeps on fighting.

Patricia had a real mixed bag on the runway that I didn't find cohesive. She shared the collection was for the modern woman who liked to have fun. The look that probably created the most controversy was the blue dress with blue wig.  I personally thought a white wig would have worked better - it would have reflected the silver details instead of looking out of place with the more traditional garments. The judges didn't agree. Judges comments include - my favourite is the jacket as it's rocking and amazing, love the blue dress, the blue dress is Tina Turner Smurf, they are all so different like a circus, will it be cohesive, welcome to the wonderful world of Dr. Seuss, the details are so special but are overshadowed, the head piece is too much, I like the wig it makes the whole look, I want you to take a look at styling. Obviously this collection divided the judges, but in the end they felt she would bring something very different to the runway.

Stanley told the judges it was about simple shapes with textures applied on top.  He even built a loom.This collection is aimed at high end women, but while he did move onto the finals, the response was not positive. I personally hated the fabric in the gold dress. I am sure it was expensive, but that type of fabric always looks cheap on the runway. Judges comments include - I don't think you had enough ideas, it is sophisticated and beautiful but where's the WOW, the proportions date it, chic and banal instead of chic and hot, I think you need to inject a bit of sexiness into these clothes and make them a bit more modern, there is a lot of promise, nothing hip, best made work we saw, beaded top and skirt were great but the skirt needs to go up a few inches and I would pair them with other pieces instead of together.

Daniel (SENT HOME) shares he chose these 3 looks because they show a range with hard and soft - the connecting thread the stingray skin. 3 black looks on the runway are always hard to see. The judges finally noticed that there were looks they have seen before and that there was nothing new or forward about his design work. Judges comments include - I've seen this look from you before, the jacket is beautifully tailored but not the favourite I've seen from you, if you have an all-black collection it's all about the shape or drama and not one look has that, I'm underwhelmed, I always think the last day it will be whoa and the clothes come around the corner will be one amazing look after another, this is too tame and not it's not interesting enough and you didn't bring the drama or glamour.