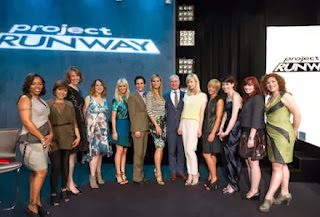 One of the designers ends up labeling this week's project THE REAL PERSON CHALLENGE. Another called it THE REAL WOMAN CHALLENGE. Both are right. Hundreds of viewers did videos on why they are Project Runway Superfans and why they need makeovers.  Eight were selected to be a part of this episode and for many of them, it was their first time to visit New York City. The women were offered the ultimate Project Runway experience. When they pulled up to Parsons and saw Tim Gunn waiting, they all went crazy. I hate when women squeal like that, but I'm sure the show loves it. The fun part was we had a tour of the actual set and backstage area which I did not realize was actually inside the design school.

Then Tim takes them upstairs where they quietly wait outside the work space. Inside the unsuspecting designers are anxiously anticipating their next challenge. All Tim tells them on entering is that they have new, very excited clients. In come the women and the designers learn they are to give them a complete make-over. Some designers are happy, some are terrified. Trying to please a customer like this could prove difficult. They've been watching for years and probably think they've absorbed a lot. In the end they were all quite open and gracious - not a demanding one among them. The women were pre-assigned via the dreaded button bag.


First the designers talked with their clients and I appreciated the fact that they asked what it is they wanted to change. Lots of stories came out. One is a Mormon, so is concerned about being conservative. Others wanted to lose the mommy look and still others were open to anything, wanting a total transformation. The designers had to take their clients to Mood Fabrics with them which I was sure was distracting.  They were given 45 minutes to shop (glad they gave them some extra time), a suggested budget of $200 - $400 and a full two days to complete the challenge. Nina Garcia was unable to be there this week so there are two guest judges - designer Erin Fetherston and Marie Claire Senior Fashion Editor Zanna Roberts Rassi.

This challenge was about more than apparel and accessories - it was a head-to-toe makeover. Hair expert Johnny Lavoy, consulting stylist for L'Oreal Paris, was brought in to help. Lavoy had viewed all the submission videos and let the ladies know they had better be open for change because it was going to start with a new hairstyle. Most would be getting a colour change to help promote L'Oreal's Féria line. When the designers returned to their hotel, the rooms had been re-arranged and Bradon and Alexander had to move in with Justin and Ken. Ken is ironing in a place that totally blocks the doorway so they can't get in with their suitcases - and expects then to just stand there holding all their luggage and wait until he is done as they have "barged" in. Please! By the time he finally moves out of the way, Alexander loses it and knocks the iron over. It escalates from there. Ken has an ugly, and frankly scary, temper. He started the incident, was extremely abusive to the talent coordinator that tried to calm him down and spiraled out of control. Tim was far too nice with him the next day and I can only hope Ken was embarrassed that he had to be placed in a room by himself, isolated from any support or camaraderie. It definitely affected the mood in the workroom.

Note - While I did agree with the judges choices, I always find it a bit sad when all the top looks are dark - a sea of navy and black. I would have loved to see some pop in the palette. I also with I could offer before/after images side by side of these women.

Helen wanted to amp her client, Jamie, up so she could feel beautiful and sexy. Good choice as Jamie's wish was for an elegant, modern, glamorous red carpet dress - a once in a lifetime dress to go with this one in a lifetime experience - and she got it.The final look was a long, strapless number with a high slit and a short dress underneath so she didn't have to worry about the slit. Helen actually lucked out in getting the client who would be the most dramatic in terms of change. Tall, slender model figure, but long mousy hair and unstylish glasses. Comments included - she looks spectacular, the corset fits well, the colour is perfect, chic and when it went down the runway I nearly fell off my chair.

Bradon decided to do a black dress with a black vest over the top out of silk - powerful, refined and classic with an edge - for his client, Jennifer, who wants New York edgy. In fact she wanted it to be a bit intimidating as she was shy by nature. He admited to Tim he felt it will be hard to impress the judges as she didn't look like she needed a make-over when she came in. Comments included - you could wear it at work with the vest over the dress and then take the vest off and you have a super sexy dress underneath, it's not boring, I love the jacket, her body looks smashing, sophisticated chic and powerful, I love the details on the shoulders and the shiny dress is a little plastic looking. Note - all but one just loved the dress, so it just goes to show fashion is personal.

Justin did something very charming, he asked his client, Tristen, for her autograph and suggested it might become the inspiration for her garment. The garment was to be conceptual, modern and one of a kind. As she was Mormon, it also had to be modest. He actually created a corset for underneath as she recently lost 100 pounds and needed a little support in the waist area. If you look at his dress above, you can see he did manage to use white embroidery to create her signature down the front and that impressed all the judges. Comments include - you thought about everything, I love the signature, super personal, I applaud you as you made a personal and beautiful black dress, I was intrigued by the signature and job well done.


Ken didn't feel the green fabric his client, Susie, loved but went with it to make her happy. It was a make it work moment for him. What she wanted was a dress to wear out to dinner, so he decided to do a colour blocked shift out of the green and a brown leather. Susie was sensitive about her waistline, but Tim reminded Ken it would look best if it just skimmed her. Ken's client ended up over the moon for this dress and exuded joy all down the runway, so it was a bit sad that the judges hated it and sent him home. Ken, however, seemed to know what was coming in the workroom - it just wasn't something he was proud of. Comments included - I didn't love it, the green is a little bit sad, the lines are not doing you a whole lot of good, one boob looks bigger than the other, just a simple green dress when you turn around, this is not meticulously well done, graphically I don't think the lines are flattering, the proportions are off, it's a little bit odd and the neckline is neither here or there.

Alexander was asked by his client, Andrea, to do a fitted, tailored suit for a corporate desk job. This meant a lot of work had to be completed in only 2 days. He was obviously concerned. Time ran out before he could finish lining it and the judges noticed. There were also some weird additions of fabric including a flap on one back shoulder. Comments included - something seems off on the inside construction, the graphic breakup is not so flattering, a lot of elements here and they haven't gone together, it's so boring, the fit is no good, there's something odd in how you cut the skirt and this could have looked compelling in a sketch, but it did not execute.

Alexandria's client, Stephanie, is an art history major who was looking for an outfit to wear on job interviews, something a bit conservative. The design is a dark solid colour jacket, white blouse and a dark skirt out of a muted print. The judges were not a fan. Stephanie didn't hate it, but it obviously didn't wow her either. Comments included - I'm not loving this look, no visual impact, it does not look youthful to me, not hip or modern, the jacket feels sad and not inspired, maternity, librarian and should have taken the modern art and injected it into it.

Dom decided to create a date night dress out of print that she hoped would help Jane-Sarah feel more glamorous - something tasteful, classic, but sexy enough it would make her husbands jaw drop when he saw it. Tim is concerned about the size of the print as he thought it would overwhelm the client. The dress moved beautifully and the client seemed happy. As far as the print, I always hate when larger women have to move in a place of fear and limitation. She owned it. Add in a great new hair colour and style and that's all that mattered.