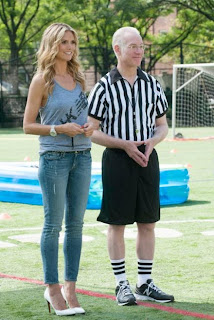 I think the whole world loves Tim Gunn.  It's rare to see him without a suit on, so how funny to start Episode 8 this way.  He charges into their Refinery Hotel rooms in the wee hours of the morning dressed as a referee.  On go the lights and TWEET - he blows a game whistle to wake them up. Each room receives a small duffel bag filled with the New Balance gray T-shirts and black shorts or leggings they are to wear.  Hilarious to see some of the more fashionista designers like Ken dressed this way.

When they arrive at Asphalt Green's sports field there is a banner blowing in the breeze that says Heidi Klum for New Balance. There are also five identical obstacle courses with four stations each in evidence which garner nervous smiles all around. Alexander expressed it the best, "WHAT THE HELL?!?!?!?!"   Heidi tells them they are going to have a field day. Tim goes on to explain the designers are going to compete in teams of two to complete the three legged race, the tire run, the wheel barrel race and the flag grab (find a flag in a pile of fabric pieces). The winning team will get to choose their fabric first and get 1 extra hour of work time.

The challenge this week is to create performance wear - now a multi-billion dollar industry - for Heidi's New Balance line and she tells them to bring the runway to the treadmill.  The winning look will be manufactured and sold at select New Balance stores and on www.newbalance.com.  Teams are only for the purpose of the obstacle course and will be not be a part of the challenge itself. The dreaded button bag does the assigning: Justin/Dom, Jeremy/Alexander, Helen/Bradon, Alexandria/Kate and Karen/Ken.  Ken in true form looks miserable and makes Karen feel like she's the last person he wanted to be paired with. His comment?  "I am not excited about this because this is like me trying to be something with my grandmother."  WHAT?  The winner is the first team over the line with their flags. Poor Bradon and Helen are miles ahead when they realize they forgot to do the wheel barrel and had to go back. The winners are Justin and Dom!

At the end of the competition Heidi announces there will be no more immunity going forward. Next they are shown a table of fabrics from New Balance available for them to work with. Each designer can select 10 yards in any combination of colours and $50 will be debited from their GoBank account. There is only one day to complete this challenge - making that extra hour of work time very valuable - and Heidi will join Tim on rounds to give feedback. They were given a bit of time to sketch and then it was back to the workroom where they find examples of Heidi's collection on their mannequins for reference only. They cannot be cut up or used in their garment in any way. The guest judge this week is the one and only Michael Kors.  It will interesting to hear what he has to say.

Drama this week is created when Helen's pulls Tim aside to privately ask if she can the reference pants on her form to help with fit and he says yes. The other designers are obviously curious, but Helen refuses to share that knowledge at first. Although she gives in under pressure, Ken goes off big time. No one likes the tirade, but some are sympathetic as Helen is known for asking questions. I found it totally silly when Helen decided she was afraid and reported Ken to Tim. It had the sound of a high school complaint. Tim does meet with Ken for a private moment and fortunately treats him with great kindness asking him why he is upset, telling him the judges believed in him and he has an ally in Tim. That's all it took for Ken to calm down and apologize. As rounds begin, Heidi expresses relief that she is seeing colour and not just all black - but in looking at the final outfits there truly is a sea of black and her top 3 picks are mostly black. It is important to note just before the top and bottom three face the questions, she admits the judges were all over the map in scoring on a few designs.


Bradon shows Tim and Heidi a purple tank and leggings with lots of unique seaming on the sides that received a very positive response. Don't know if that was a mock-up because the final look was done with grey. black and lime green piping.  I love this look and feel it really had the most technical work involved. This would have been a win for me - or at least a top 3 - but remember it was about what Heidi felt would work in her line, so perhaps she felt it wouldn't find as large of a client base as Helen's or maybe it would be too expensive to produce with all that intricate detailing.

Jeremy - would love to give you anything on Jeremy's work this week, but nothing was given on TV. They didn't cover his inspiration and when Heidi and Tim came by all they talked about was the very red sunburn on his face from the day outside. As he was in the middle there are also no judges comments.  It is quite basic, but it was good enough to get him a pass to next week and it was nice to see some colour go down the runway. He uses a technique where the seams of the garment go around the body creating a lot of interest.  Not a big fan of this look though - not totally bad, but nothing great.  The negative for me was the loose fit of the crotch, never attractive.


Justin was very intimidated by Heidi and didn't have a lot on his form.  The only real feedback was to not make the front v-neck too high.  On the other hand you don't want it so low the girls come out. I liked the colour scheme, the angle zipper on the jacket and the shorts. The silhouette of the bra top just didn't work. The vee, despite her warnings, was super high in front although the back was very nicely done. Too bad as this look might have garnered higher scores if the bra had been fashionable.

Dom shows Heidi and Tim sketches with a really cute tank with lots of open strapping to show off the back paired with a jacket and leggings. Loved the sketches, but really not a fan of the look on the runway. I think the jacket and top are fine, but I don't like the pants.  Perhaps if the red striping was straight down the sides it would look more slimming.  As it is it looks a bit boxy and almost like the model has running shorts over above the knee length leggings over long leggings. The pants are just not flattering.