With the recent launch of Christopher Bate's collection into Holt Renfrew, I thought is might be a nice time for a retrospective of my 2 previous articles.  As you enjoy, please remember that these are 5 and 6 years ago and Bates has grown as a designer over that time.  For an updated look at where he is now, you can check out the next volume of Raine Magazine due for launch the end of April 2014! 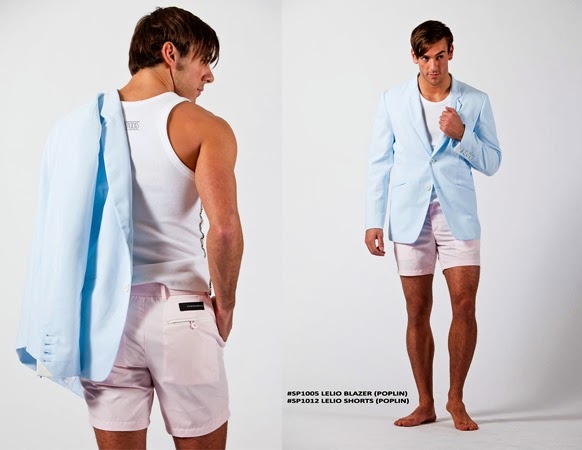 From the high of showing at LG Fashion Week to the low of our tough economic times, the last year has been a roller coaster ride for menswear designer Christopher Bates. Through it all his brand continues to grow. The immediate goal is to develop a strong presence in North America, but his eye is firmly on the end game - Europe.

Bates' line has a European feel at odds with his Vancouver upbringing. Six weeks spent in Europe at age 17 was his first exposure to a widely different sense of style. When he returned in 2005, those early seeds of interest turned into something much more. "It was the second trip that just blew me away. We were in Latvia, Estonia and Sweden. We were right at the cutting edge of the street scenes, it was really intense. I was already into fashion and that trip hammered it home." A year of studies at Istituto Marangoni in Milan honed his technical skills and he returned to Canada to launch his first collection - Spring 2009.
Luxury fabrics are fundamental in each collection. For Bates, "It is where a lot of my money goes; it's what I invest in. I pay for rare, unique and quality material from Italy and Portugal and they're made here in Canada so quality control is high. I also do low production runs. With limited quantities you are going to end up with high price point, but you're going to have a unique product that not everybody has. If you want to purchase a pair of my jeans, you might have one of ten pairs in the world." In Canada, Toronto has been his hottest market for both ready-to-wear and custom work. At LG Fashion Week the media took notice with articles appearing in The Toronto Star and in New York's Nolcha.com. The Catwalk Chronicles also have a television segment scheduled to air in the near future.

Spring 2010 was inspired by Romeo and is "...a modern interpretation of today's man as Shakespeare's doomed lover. It was inspired by my time living in Italy." Classic colours anchor the 14-piece collection and unusual accents give it depth. Standouts include brushed twill blazers, pants and shorts in both light blue and pink (as well as white and black) to mix and match. The deep ocean blue Lamb leather jacket, black mesh tank top embroidered with a black scorpion and Italian Flag Ciao Bella shirt are must have pieces for those wanting something with more edge. Unusual silk screening details include a green rose on the white twill dress pants and a Romeo and Juliet print on the back of a white denim bomber jacket (his personal favourite). Labour intensive hand-distressing accents the jeans. Accessories include two styles of boots, an English Bridle leather belt and a modern cut Duchess Silk black tie. Looking towards Fall 2010, Bates has looked to electronic music for inspiration. Electro: Dark Energy will be, "...dark and modern with a hint of sportswear."

Despite the economy Bates continues to move forward. An investor's proposal is being developed with the help of his business manager and he has his agent in London laying the groundwork for a future expansion into the European market. Bates' drive, focus and determination will surely take him there sooner than expected
For more information check out his website: www.ultramenswear.com. 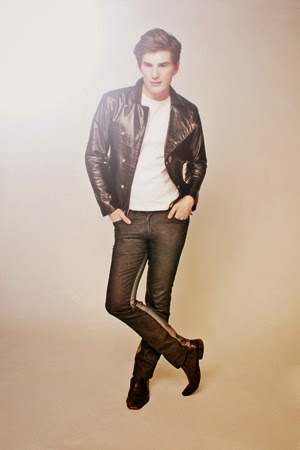 High-end menswear designer Christopher Bates is a homegrown talent destined for international success. From sketching hip hop and skateboard clothing as a teenager to launching his Spring 2009 debut collection last October, he has always been drawn to fashion.

Business was his original career path. With degrees in Economic Geography from UBC and Marketing from BCIT, he spent 5 successful years in the industry. "3 years ago I was an account executive in advertising and marketing and I asked myself, 'What do I want to do with the rest of my life?' The answer looked like a lightening bolt - I want to be a fashion designer. There's a million other things I could do but this was the only one I knew I had to do." After extensive research Bates decided to apply to the Instituto Marangoni in Milan. With determination he entered the intensive program (3 years rolled into 1). The person on each side of him that first day had already graduated from 3 year programs while he did not know how to sew and only had basic drawing skills. "It was overwhelming at first but I was prepared for anything and was willing to work really hard. I went to every lab and never missed a class." On graduation he had an amazing job offer from Armani but had to return to Canada and renew his visa. Once here he realized what he wanted most at that moment was to launch his own label.

All those years in business proved a great asset. Bates started his company under the ULTRA label, raised funds and began work on his Spring 2009 collection. "I already had a collection, a brand and everything in my mind before I went to school. I went there to flush it out. It was a definite evolution and I gained a much more international fashion sense." The hardest part for any designer is the investment. It is a year from the time you design your line until the garments are in the store. Travelling is also a necessary expense. There are also many great experiences. To date the top one for Bates was when he walked out on the catwalk at the global launch of his label in October 2008. 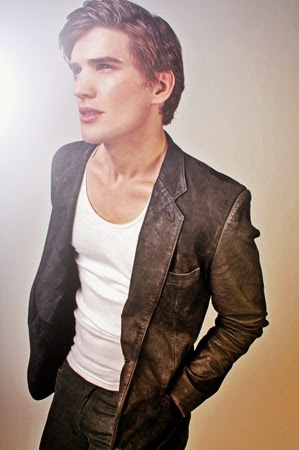 Inspiration can come from anywhere. "Some people might see a building and be inspired to build another building or paint ordraw it. I sort of re-imagine things and want to make clothes out of them. It might give me an idea for a texture, a seam or a pocket." Spring 2009 was inspired by a "Euro trash jet set summer to music by Depeche Mode." I leave that to your imagination! The diverse collection includes tanks, tees, jeans, dress pants, dress shirts and even a white metallic linen suit. In addition to the basic palette you will find accents of Electric Blue, Pale Blue and Pale Pink. Each season comes with a standout piece and this season it is black-on-black Italian leather jacket with embroidered scorpion detail. Accessories include belts and shoes (yes he designs his own) and there is always 1 pair of "destroyed" pants. This season it is a pair of jeans. Fall 2009 will see a larger collection that includes 3 suits and additional accessories (ties and gloves). I've seen the stand-out piece and it's a total departure from the Spring collection, but you'll just have to wait to check it out.