Fresh Asparagus and Peas with Gnocchi 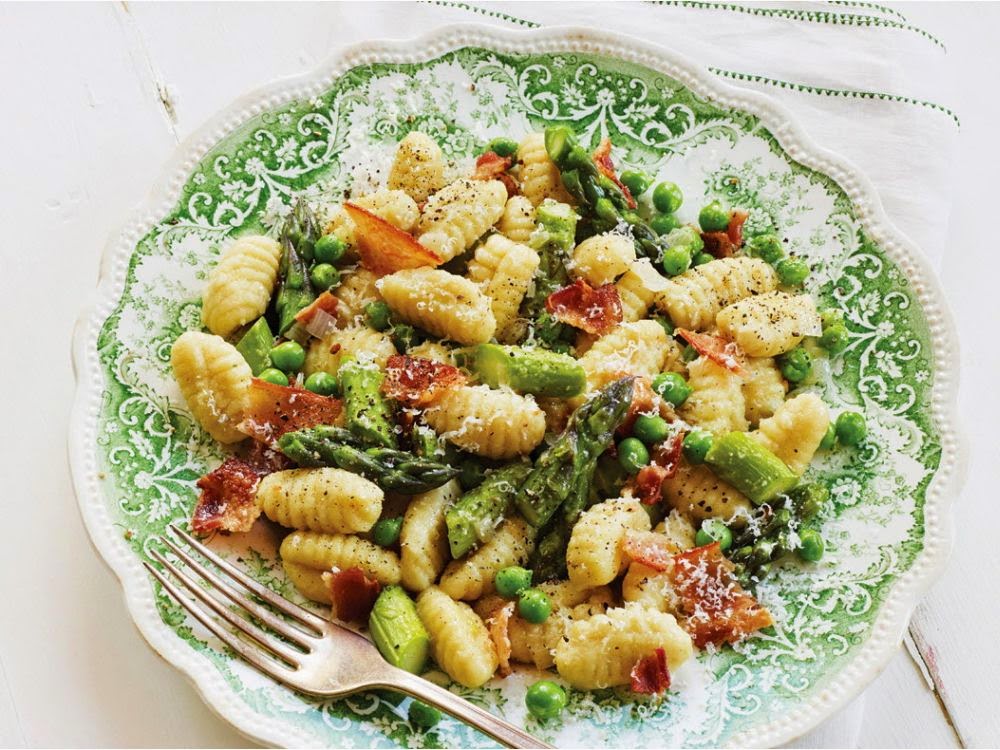 I grew up eating very plain mid-western food at first, and then by the teen years moved into the every casserole you can make with one pound of hamburger and a can of Campbells Cream of Mushroom soup (or cheddar, or celery, etc.). Grocery stores didn't carry anything exotic in terms of produces in particular.

There were no local gourmet markets with organic or unusual vegetables, freshly made pastas, sauces and my favourite - Arancini. Mexican Mole Sauce was not to be found. Neither was a pack of Thai House cooking sauces.

Sunday meal was pot roast, potatoes and big hunks of carrots cooking in a large metal pot with a lid. There was no red center. The edges were always super browned and crispy. That was my favourite part.  Salads for company during the winter months were jello with something in it - cottage cheese, fruit or even celery. Another off-season "salad" I remember was drained canned peas (a weird washed out green shade), cubes of aged cheddar and mayonnaise. Vegetables were served in sweet/sour or cheese sauces.  Yams were topped with marshmallows and brown sugar. Portions were small and we filled up on sides and dessert.

One of the joys over the years has been to slowly expand the foods I try both in and out of the house. One which I wrote an article up on was Polenta.  Not sure the family is as big a fan, but I really love it.  I've learnt there are more types of pasta than spaghetti noodles and although I still don't make my own, I love going to the local deli and buying it freshly made.  Yams are now served either just roasted and pureed with a touch of real butter or as Yam Pad Thai. Salads for the most part contain something fresh and green.


One ingredient I've been wanting to explore for a long time is Gnocchi. I actually have several friends who can make this from scratch. That doesn't seem to call me, but I did want to try cooking it once. When this recipe by Foodland Ontario was posted in the Vancouver Sun I couldn't resist. The writer who shared it - Laura Robin of Postmedia News - made a few suggested changes.  She increased the number of bacon slices from 3 to 6 or 7 and substituted a flavoured Smokey Chipotle bacon. I increased the bacon as well, but went with the regular as I had it in the fridge. She also topped with 1/3 cup (80 mL) of toasted pine nuts and some shavings of fresh Parmesan. I skipped the pine nuts and only added shaved Parmesan on top.

If I can encourage you in one thing only - be sure and buy freshly made Gnocchi from your local deli or make your own.  Same with the asparagus - don't use frozen or canned. The only vegetable I use frozen is peas. They are just too hard to find and shell. This recipe has a nice subtle flavour that is easy on the palette. Enjoy!

1. In a large skillet, cook bacon on medium - high, turning once, until crisp. Transfer to a paper-towel-lined plate; set aside. Reserve 1 tbsp (15 mL) of the fat from skillet. Wash skillet.

3. Meanwhile, in large pot of boiling lightly salted water, cook gnocchi according to directions (or until they float to the surface), adding peas for last 2 minutes of cooking time. Drain, reserving ½ cup (125 mL) of the cooking water.