Prague - Vienna - Budapest: Day 5: A bike ride to Karlštejn Castle and along the River Berounka 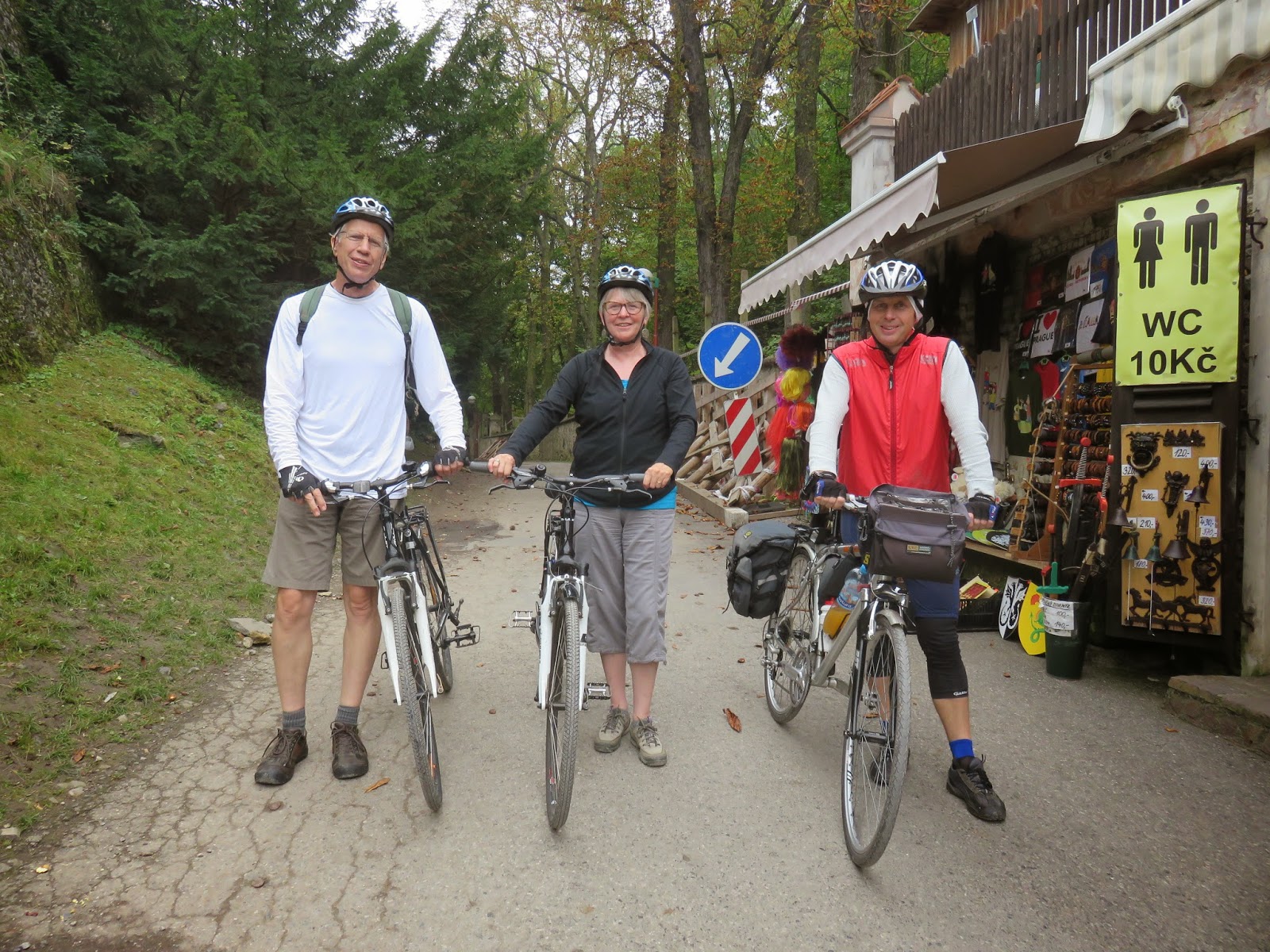 My husband Glen is an avid bicyclist - riding to work every day and recently joining the GranFondo Whistler - a ride from Vancouver or Squamish up hill to Whistler that runs every September.  When we began to plan our holiday through Go Real Europe, one suggestion owner David Manley put forward was 2 bike rides - one in the Prague countryside and one in the Viennese countryside. Glen was over the moon and I was willing, but I needed to get back on a bike after a 20 year absence.

For 10 weeks leading up to our holiday I rode about an hour a day around our city.  It came to be a real pleasure and I surprisingly also lost a lot of weight. The preparation was worth it as the section of the ride to Karlštejn Castle involved a few serious climbs, something I could not practice in the very flat landscape where I live. I was not too proud to get off my bike and walk up hill. Sometimes Glen pushed my bike for me.  But in the end it was truly a wonderful experience which I am glad I embraced. The hard work paid off and although I walked up a few hills, I still had energy to get me through the entire ride.

Our tour guide - remember Go Real Europe books you one-on-one guides - was Peter. He picked us up right in the lobby of the U Suteru and walked us to the bicycle rental shop. From there we rode over cobbled streets and through heavy tourist traffic to the train station where we caught the connection to Beroun.  An adventure that fortunately lasted just a few blocks.  The trains had one compartment set aside just for bicycles with vertical wall racks.

As we traveled, we had a chance to view the countryside and get to know our guide. Peter is an uber-experienced cyclist who travels sometimes up to a month on his bike carrying a tent. I can't remember all the places he has been, but it was impressive.  Czech has over 1,000 kilometers of bicycle trails and a large, enthusiastic cycling group.  I quickly realized this was not going to be the ordinary cycling experience. We were going to see some back trails and I was right.

On arrival in Beroun, we bicycled through the town to a local park and began our first climb.  It was a small hill and at the top was a viewing tower where we could see the entire valley. I have mentioned before how much Glen and I love to see the view from above, so it was a great stop. But it was also the first of several climbs we were to do and if it got too steep, that meant dismounting and pushing the bike up the hill.


From here we road through the beautiful countryside. It was an amazing break from being in the city walking the streets and during at least one flat stretch I enjoyed riding as hard and fast as I could just to feel the rush of the wind.  Then at the base of the hill we needed to go up, Glen's bike had a flat tire.  Fortunately Peter was well-prepared.  Out came the tools and the patch kit and we were on our way in no time.

Getting up to the castle was going to be a challenge as no matter how you do it - the road heads up. Peter chose to take us around the back way so we could come up through forests and meadows and have some wonderful views of the countryside.  It was beautiful. Along the way we learned interesting facts such a the Czech people love mushrooms and the skill on how to pick the right mushrooms in the forest is handed down through the generations.  Some trails were finished, other moments we were on dirt/gravel tracks. We saw views the average tourist doesn't get to enjoy.

Lunch was in the Pod Dračí skálou - a lovely restaurant tucked into the trees where only the 3 of us and 2 local women were eating.  Obviously there was no English menu here, so Peter asked us what meat we wanted and then described the dishes available.  I ended up choosing Kuřecí Steak s Bazalkou which translates as Chicken Steak with Basil. Peter and Glen were supposed to get the special of the day - Špačkův Zvĕřinový Guláš - which roughly translated means Špačkův Venison Goulash. I can't seem to find out what Špačkův means.  Peter thought the dish would be Wild Boar Goulash, but neither Glen or Peter felt the meat was Wild Boar when it arrived. At the last minute our guide changed his order to another dish. While he couldn't remember what he ordered, it actually looked the tastiest. But all 3 were wonderful.

Peter also mentioned another interesting fact - there is zero tolerance for drinking here whether driving a car or on a bike.  No .08 - just zero. Even on a bicycle you can be stopped and given a breathalyzer test. We also discovered at lunch that Peter was an avid fly fisher.  WOW - so was Glen.  So I relaxed and enjoyed my food and the beautiful scenery while the 2 of them spoke excitedly about fly fishing in the Czech Republic.

From the restaurant we continued up to the castle, sometimes riding and sometimes walking as there were some steep moments.   Karlštejn Castle was founded in 1348 and is a beautiful castle to visit. However, you cannot go inside and wander. There are 1 hour guided tours available only. As this was our day to enjoy being in the countryside, we chose just to explore the courtyard and walls where we could see the views of the town below.  This left us a lot more time for exploring as we continued our bike ride.

From the castle, Peter took us down through the hill through the more tourist side - a village full of shops. We stopped briefly for an ice cream and then it was down-down-down until we reached again the River Berounka. The trail wandered along the water front and through small towns along the way. Here and there Peter stopped to point out a prime fishing spot to Glen.  I think in the end we covered almost 40 kilometers by the time we reached the railway station that would return us to Prague. 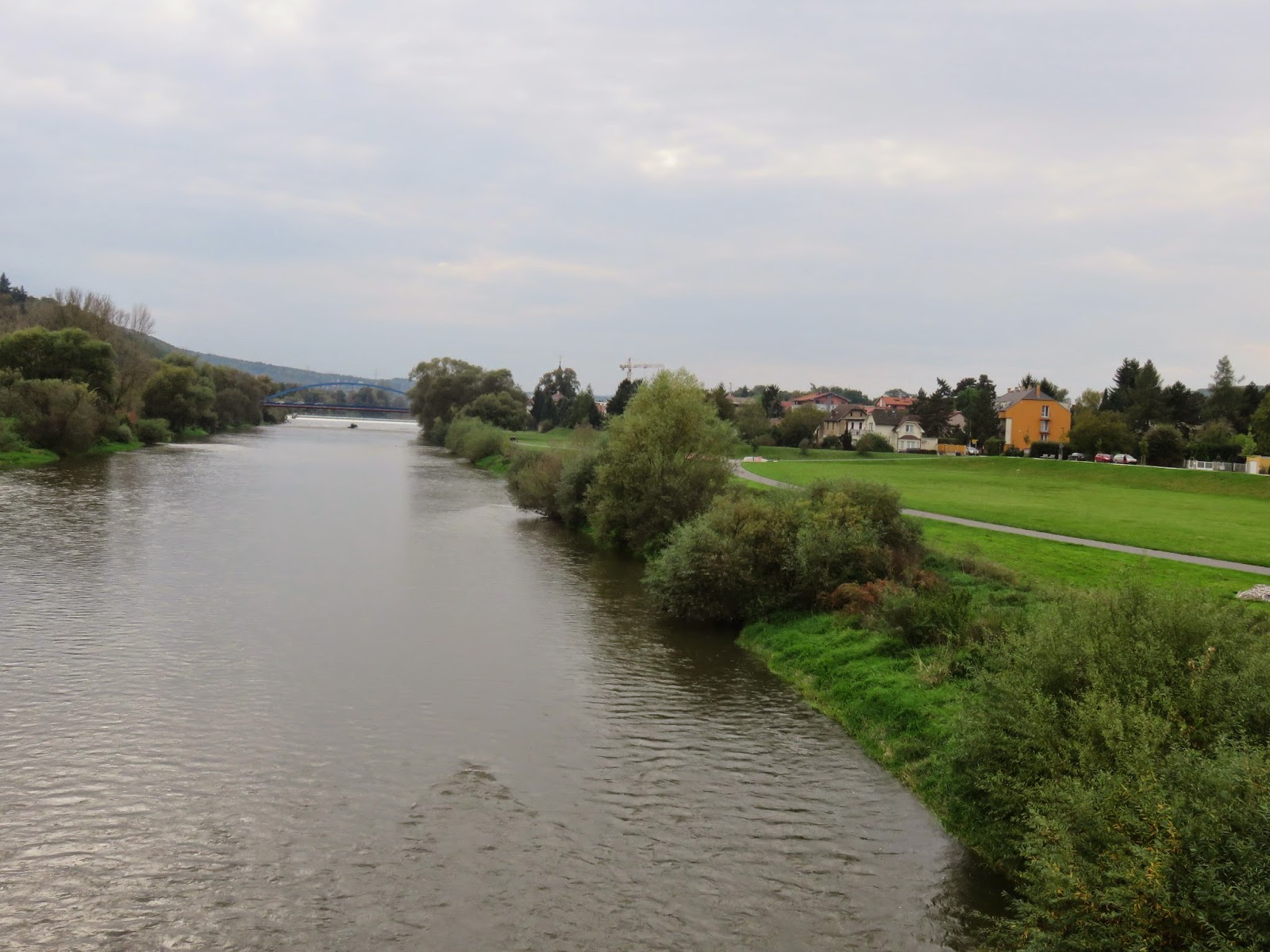 On the train back, Glen and Peter both were lamenting the fact this was our last day in Prague as they could have hit a local fly fishing shop and maybe even had a small fishing excursion if we had one more day here. I could have used a free to day to shop and explore areas only I was interested in. Oh well.  We'll have to save that for our next visit to Prague.
Beroun bicycling bike tour Czech David Manley Go Real Europe goulash Karlstejn Castle Kuřecí Steak s Bazalkou Pod Dračí skálou Prague River Berounka Špačkův Zvĕřinový Guláš travel