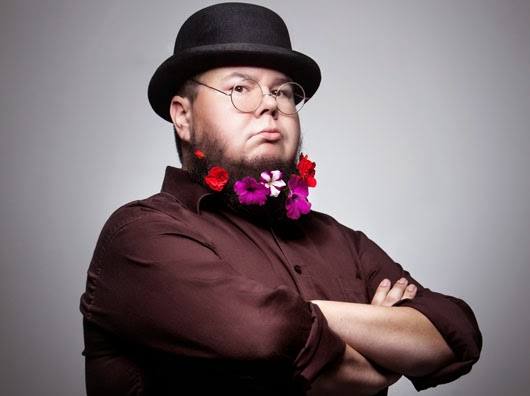 My interview with Spoken Word Poet Shane Koyczan was not like many of my others. I usually either arrange interviews with people personally, or Raine Magazine sets them up. After the initial interview we stay connected through email and Facebook. One designer even came from South Africa to stay with me for a week.

With Koyczan, I had just come across his Youtube video - To This Day - and was floored.  All three of my kids had been bullied in school. One time the police were called in. His words spoke to me profoundly. I was part way through writing Life Outside the Box, but the idea I needed to hear his story kept rising to the surface.  I finally listened and emailed his Vancouver agent so see if an interview could be arranged. It took a little back and forth, but a date was set - I would get one hour.

If you know me - you know I rarely manage to finish in one hour.  I also usually try to find a relaxing place we can talk. This interview we were led into a small meeting room at his agency, introduced, the door closed and the clock started. Despite the more formal nature of the setting, by the end of the hour I had been captivated by his journey and by he people he had met along the way.  Several weeks later I found a quote of his that so spoke to my insecurities, it's my go-to on days I feel inadequate, “If you can’t see something beautiful in yourself, get a better mirror, look a little closer, stare a little longer.” Amen.

I never had a chance to connect with Koyczan again, but am grateful to have had that hour and hope at some point there will be a second chance to meet.  So much has been shared about his experience with bullying, that I chose instead an excerpt on how he first stepped onto the stage. Enjoy! Oh - and in case you haven't seen To This Day yet - you'll find the video available at the bottom of the excerpt!

"Life stepped in during his last few years of high school to give that first firm nudge down the path to Spoken Word Poetry. The drafting class he had signed up for was overbooked. Drafting was a comfort class as it was solitary work. You sit at your desk and draw lines. The school bumped him to the next class available alphabetically and that was Drama. With no social skills and inept at talking with other students, Koyczan felt his life was over. He was wrong. The change was a blessing in disguise...

...Koyczan’s first drama teacher forced him from the shadows by demanding participation. It was just what he needed. 'I was the guy sitting in the class not wanting to play any of the reindeer games.' The second teacher built on that foundation with a more nurturing touch. In fact, she was the first to take a chance on him by giving him the lead role as Edward Llewellyn in The Attempted Murder of Peggy Sweetwater. His initial reaction was not positive, but that quickly changed opening night.

'At first I was cast in a minor role, because I didn't participate very well in the theatre games. Then I did a bang up job and she moved me to the bigger role saying, ‘I think you can carry it.’ I was terrified. It was a long play. Who wants that responsibility as a kid—memorizing all those lines? But the role was a confidence builder. It was absolutely amazing to go out on stage and hear people laugh at what I was saying or doing. Being on stage led to the burgeoning of my own confidence.'"

Be sure and keep your eye out for Life Outside the Box #2, tentatively due for release in the Spring 2017. I can't wait to share ten new and amazing stories with you.
Life Outside the Box People poetry Raine Magazine Shane Koyczan spoken word To This Day Vancouver