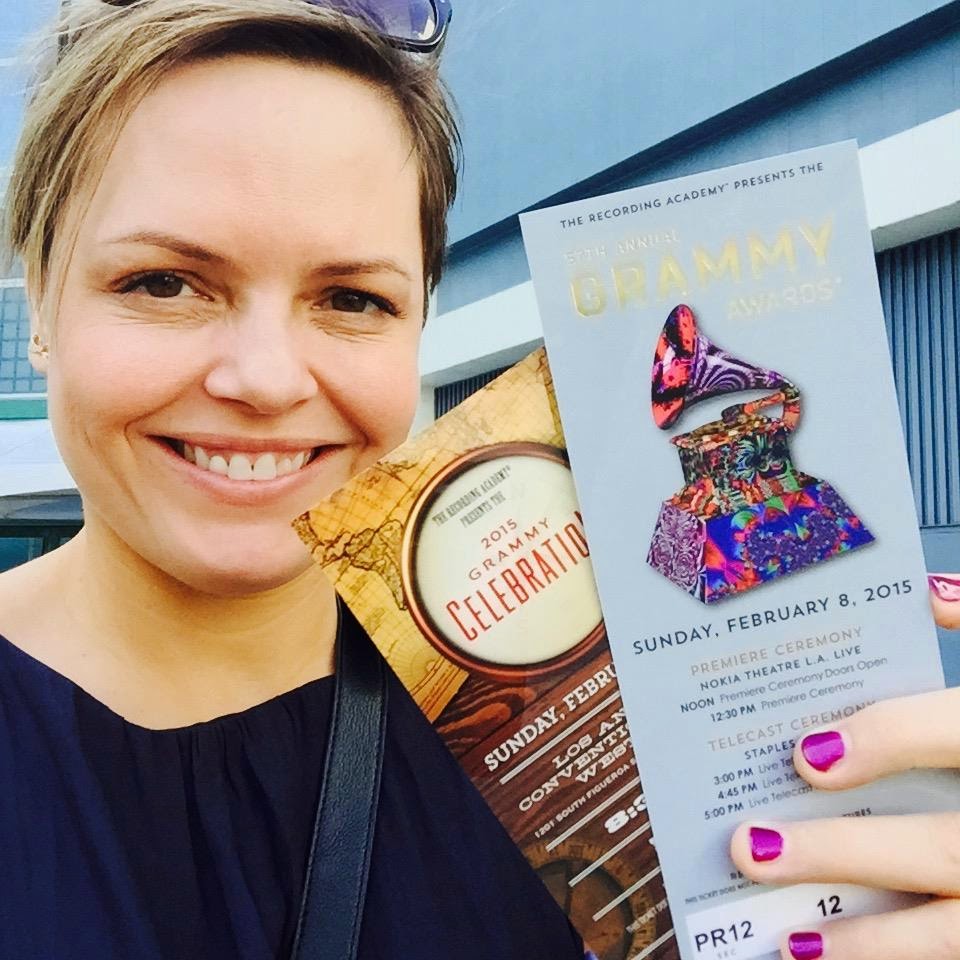 Los Angeles. Truly a city where anything can happen. Fill it with thousands of Grammy voting members and its like summer camp.
Jimmy Kimmel didn't happen. As they often do with TV shows, they ‘oversell’ the tickets to ensure every seat gets filled and it seems almost everybody with a ticket was there early. Audience capacity was met good and early.
Wednesday night I got to see my friend Scott Healy, of Conan O’Brian’s Basic Cable Band and a grammy nominee last year, lead a 12 piece jazz ensemble. Man they kicked ass! I stalked the amazing drummer Bernie Dresel, grabbed a selfie and friended him on Facebook. Ya know, Jody style.
Thursday night was the Legacy Concert. It was a bit of a chilly night for Los Angeles. Fog whispered around the people milling about in front of the Wilshire EBell Theatre. We all knew something magical could happen in this 1200 seat theatre with a line-up including Aloe Blacc, John Mellencamp, Melissa Etheridge and more. The evening's focus was on the evolution of music’s role in advancing philanthropic causes and celebrating the musicians who put on huge festivals to create awareness and raise money.
As we took our seats, it wasn't long before John Mellencamp took the stage. He began telling stories of his grandmother and playing acoustically with only a single fellow guitar player. One of the original musicians involved in Farm Aid with Willie Nelson, he introduced the man himself who finished off his small set with On The Road Again. Once we were invited to join in. I don’t believe one throat sat silent for this all time classic hit and singing it with Willie himself.
Several other performances happened at the Legacy Concert including: Deborah Cox, The Plain White Tees, Lindsey Stirling, Walk The Moon, and Robin Thicke. Although Thicke impressed me with his vocals, the poor taste he left in my mouth with his date rape song and on-camera actions last year still linger. I refused to stand in celebration of his efforts.
The highlight for me was Melissa Etheridge. She took to the stage in jeans and sneakers, hair flowing, with her guitar slung over her shoulder and pressed to her hip. She leaned into the mic and whispered, ‘Where’s Aloe Blacc… Aloe?’ Not a name I’ll forget anytime soon, Aloe joined her on stage and with a string quartet and drums they did a version of the Beatles song ‘While My Guitar Gently Weeps’. This is what music is about. This was the magic I was hoping for. Not a vocal after that whisper of an introduction from Ethridge. She didn't sing on this song, but with her effortless musicianship, she blew me away with her guitar shredding. She did return to close the show though and of course blew us all away again.
Friday evening I was dolled up and out the door, doing the rarely heard of trip to the Metro. Yes, all in my glamour I rode the subway. Two of my close friends had their album - Winds of Samsara - nominated for Best New Age Album and they were having a party downtown. The lights, the room, the crowd of talent all vying for photos with Ricky Kej and Wouter Kellerman on the red carpet was exciting and alive.
I had barely 40 minutes to work my way through the room, hug old friends, greet new ones I’ve only known online, and steal as many selfies (check out link) as I could then it was into a car with my knight in shining armour (for the 2nd time on this trip) Mark Etheredge. Off I went to the House Of Blues to emcee an event for 300 Grammy voting members…
Our event, The (first annual) Soireé was such an immediate hit they had to move our red carpet to the Grafton Hotel 2 doors down. Celebrities such as O-Town, Bai Ling, Jiff the dog and Malcolm Jamal Warner came. I have done red carpets before, but this one was so packed with photographers and interviewers, I can’t help but day dream of next year!
On stage I had the most wonderful time. Of course I was super excited, so quite ridiculous at times, and some moments I might not live down. But the overall feeling of support and joy still lingers - not to mention the request to have me back next year as emcee (and offers from several others to emcee their future events). Looks like I might have a sideline biz ready to explode!

Of the night, the performances that stood out mostly for me were Tess Henley, Emilio Solla, Wouter Kellerman, Kevin Lucas, Melanie Amaro, Al Walser and Malcolm Jamal Warner, who picked up flirting with me on stage to entertain the crowd like the amazing performer he is. Oh how we had fun! Nominated for his spoken-word contribution to Robert Glasper's Black Radio 2 in the Best Traditional R&B category. He is, as you’d expect, a natural on stage. His sexy, intense, insightful and poetic lyrics spoken over his fat 5 string bass notes, and supported by an excellent band grabbed the room and had us all enraptured. Of course when he dedicated his 2nd song to me and used my name in the lyrics well… I certainly didn't mind!
Don't forget to check back in a few days when I share my experience at the actual Grammys!! If you missed Pt 1 - click HERE. In the meantime, be sure and follow me on Facebook and Twitter.

(NOTE - you can hear recordings of several singles by Jody Quine at https://soundcloud.com/jodyquine. Enjoy!)