Los Angeles - Fab Food, the Cabana Fiasco, Freezing at the Beach and a Pirate Show! 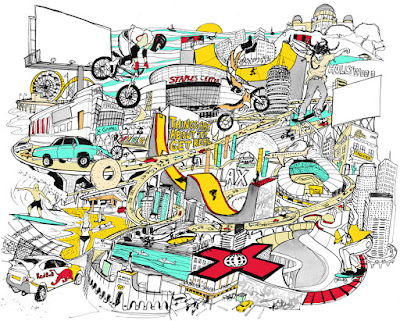 It has been over three years since I made the trek to Los Angeles to visit my youngest brother and his family. I lived there myself for five years and most my family stayed in the area for many years with me the only exception. As soon as university was done I fled first to San Diego, then to Seattle, and finally settled in Vancouver, British Columbia, after I married a Canuck!

It was hard being so far away from family - especially after I had three kids. The cost to fly down was out of our ability most years, so it was only occasionally we made it down for Christmas.  When we did visit, we fit in one day power trips to Disneyland, Knotts Berry Farm or Universal Studios. Sometime during the kid's teen years, we finally managed a 3-day stay at Disneyland - but they weren't as awestruck by that time.

Then our "kids" became adults and the diverse schedules made travel south nearly impossible. One moved to Eastern Canada, another went back to school and the third was working full-time. Desperate to see my brothers (one in Colorado - one still in LA) I booked a multi-destination plane trip with my oldest son to fly down for two niece's high school grad ceremonies - 5 days in each place. I covered the Colorado Springs segment in another post - click HERE.

Visiting family is such a treat as it's the one time I am absolutely not responsible for food. I do not have to decide what to cook, shop for or prepare. That is a real holiday is for me.  My youngest brother is also a fabulous cook who makes everything from scratch. His cookbook collection is amazing and the number of incredible top notch kitchen gadgets in his kitchen are truly drool worthy. We were offered homemade Persian dishes one night and the others treated to a variety of Mexican recipes - two types of tacos, chili verde, and more, all with  homemade salsas and tortillas fresh from the local bakery - still warm.

In exchange for this great TLC, we were asked to help with a chore. My sister-in-law had bought a kit to build a large, metal gazebo that needed to be assembled for an upcoming party.  My son and I headed outside to help my brother put it together. How hard could it be? Well, it was heavy and awkward to manage all the pieces, get them upright and connected. Then we discovered there were 2 longer and 2 shorter sides which we of course had attached in the wrong order. The top pieces connecting the side poles were arched on one side and flat on the other. Again we managed to mix these up randomly.  After much unscrewing and re-assembling, we finally had it together. The few hour job ended up taking us two days.

Looking around for something touristy we had never done before, my brother stumbled on a themed dinner show called Pirate's Dinner Adventure (right near another called Medieval Times Dinner and Tournament). It was definitely aimed at families with kids, but we jumped right into the spirit of the evening singing, cheering and pounding our tables loudly.You definitely need to let your inner child out. The evening began with hors d'oeuvres, and then a short pre-show where we are ushered into the main area by ticket colours. Each colour had their own special pirate to cheer for. Some sections definitely had better viewing than others.

While you watched the show, you were served dinner including soup or salad,  half chicken, beef kabob, mashed potatoes, brownie with ice cream and pitchers of pop, water or iced tea. Stronger drinks were available at an additional cost. They had a basic plot guiding the show tied together with trampoline antics, fight scenes, silk dance performances and silliness. Several parts of the show saw kids from the audience participating with enormous smiles on their faces. If you can let go and just be a kid - it's a ton of fun.


Living up in the Pacific Northwest there is a feeling that by the end of May it will be warm and wonderful in Los Angeles. Not so this trip. Mornings were overcast and cool. Evenings were cool once the sun went down. Only two afternoons truly were hot and sunny.  We really didn't come properly prepared. We sweated in the sun during the day and then froze when the sun went down.

On our last day,  my brother wanted to take us all to the beach for a hot dog roast and s'mores toasted over the fire. A few of the people going were delayed so we didn't arrive at Huntington Beach until 5 p.m. The wind had started to pick up. Jackets went on immediately. One smart local had a puffy jacket with hood tucked in her bag. She was the only one who looked warm. It didn't take long before we were all draped in jackets and wrapped in dry beach towels while we huddled around the fire blazing in the cooking pit. 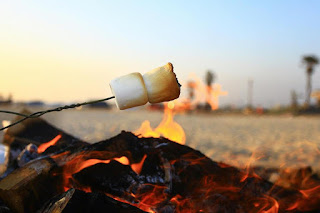 That isn't to say we didn't have a fabulous time - we did.  Hot dogs roasted on an open fire and then smothered in steaming home made chili is hard to beat.  Add in the camaraderie, the funny stories and a melted marshmallow tossing contest which everyone failed at and it all made for wonderful memories that won't be soon forgotten. BUT, I still wish I had brought warmer clothes. Time to buy myself a puffy coat stuffed in a small bag.

On an ending note,  I just want to remind everyone that in LA - rush hour goes from 6 in the morning to 9 at night. GET A GPS if you're going to drive and allow a couple hours to get anywhere.
Colorado Springs Huntington Beach Los Angeles Medieval Times Mexican Food Pirate's Dinner Theatre travel Vancouver