The Theory of Everything - The Life Journey of Stephen Hawking

I finally had a chance to watch Universal Pictures' The Theory of Everything this week.  An upcoming trip to Ontario had me downloading onto my iPad to distract me in flight, but I ended up coming back with it unwatched. Once home, Glen and I used Airplay so we could enjoy it together.

Fortunately I knew little about the movie other than it was about Stephen Hawking and had received good reviews. That is enough for any movie. Coming in with little expectations allows you to enjoy your simple reactions and mine were oh so positive.  It was amazing! Where to start.

I felt the casting was strong on this one.  Everyone rose to the occasion - their characters believable. I want to say a personal kudos to actor Eddie Redmayne for his wonderful portrayal of Hawking.  What a demanding role that had to be. He subtly showed the first signs of ALS - also known as Lou Gehrig's Disease - through the tilt of his head and problems with using his hands/feet/ankles.  There was a charming early awkwardness that built over time into symptoms of ALS.


From first diagnosis offering no hope and a life expectancy of only two years, to accepting the love of Jane who would become his wife, the arrival of three children and his rise to fame, we follow the wonderful highs of accomplishment to the terrible lows as his progression into loss of personal control steadily continues. I searched high and low to find a few photos of Redmayne later in the film and a similar one of Hawkins to show how uncanny his performance was. The ones I found are just a shadow of what he brought - classic movement problems, garbled speech and difficulty eating all which became more difficult as time passed.

Felicity Jones' portrayal of Jane Hawkins was also touching. You felt her determination, strength and the sacrifice this path forced on her. Great performances were also seen from Harry Lloyd (fellow Phd student) and David Thewlis (professor - Dennis Sciama), to name just a few. Helping them offer us believable characters was a strong, tight script, great filming and wonderful pacing. 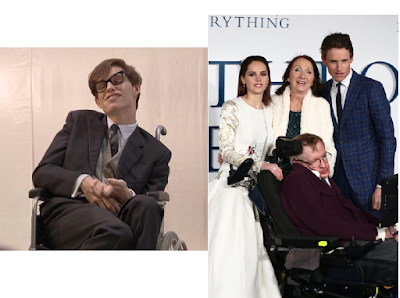 What was most astonishing was to see a comment at the end that Hawking was 72 at the time of release and still working. He is now 73 as of this date. As he was diagnosed at the early age of 21 and was given 2 years to live, that means he has beat the odds by 52 years so far. Although he is the exception to the rule, what a beacon of hope he is for those receiving this diagnosis.

If you haven't had a chance to watch this yet, I'd made time soon. This is a truly wonderful film that I will mostly likely enjoy a second time.
ALS books Stephen Hawking David Thewlis Dennis Sciama Eddie Redmayne Felicity Jones Jane Hawking Lou Gehrig's disease movie reviews The Theory of Everything Universal Pictures