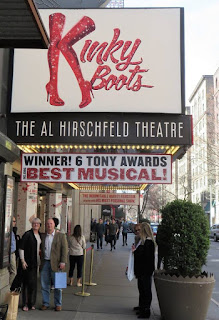 As predicted, this Sunday was the first warm day, something that would continue for the few days. It wasn't really hot yet, but my jacket soon became unnecessary.  I had a real treat lined up today.  Amber Nifong, an amazingly talented fashion designer whose grad show totally blew me away, reached out to have a catch-up brunch. As I am no longer young, it took me by surprise. What an honour. (Check out my show review HERE!)

My first delight of the day was again being serenaded on the train, this time by the duet of Charles and John singing rousing gospel numbers. The picture is blurry because they never stopped moving.  My toes were tapping and a grin spread across my face.

Amber chose a restaurant in East Village, an area I wasn't all that familiar with which is always fun. I made a good choice and a bad choice in terms of getting there. The good choice was to leave fairly early so I would have time to figure out where I was going.

The bad choice? I totally screwed up my trip planning.  Wrong subway, wrong stop, misjudged how far it was on foot from one point to another. Fortunately I love walking new areas and my fold-up subway map includes a more detailed tiny street map.  I ended up arriving on time and despite the long walking route, enjoyed exploring what the area offered along the way. I also got in some great exercise.

Amber and I met at the Copper Still at 151 2nd Ave. We were the first people in the doors at as they opened which meant great service and our food came quickly.  They have a lovely and varied weekend brunch menu.  Not a morning person, I went with the standard Eggs Anyway with home fries (a favourite of mine), brioche toast and salad. Amber chose the Eggs Norwegian, a combination of poached eggs, salmon & house made hollandaise that was also served with home fries & salad. We started with a mimosa each and ended with several cups of strong coffee. 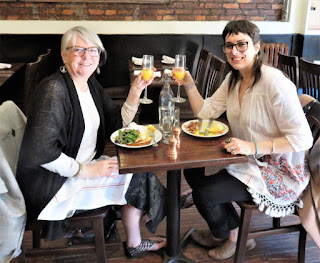 It was fascinating to hear how her career was progressing and what it was like to work in the garment district. This is one seriously talented lady, but paid jobs were still hard to come by, unpaid internships the norm, rents high, salaries low and you often worked for companies that had very different aesthetics from your own.  If you think working in the fashion world is glamorous, just spend some time with a designer just starting out. You really do need passion, drive and focus to carry you.

A highlight of our time together was to get a look at the illustrations in her portfolio - I am a HUGE fan of illustration - and the new collection she is just beginning to move forward on. As was her last, it is unique, outside the box and very conception. I literally drooled over her concepts and cannot wait to see this collection come to life. Hoping I can be front row and centre at it's unveiling.

After we finally ran out of steam, Amber was nice enough to offer to walk me to the closest subway station so I could get on the right train this time.  We did a double take and paused on the way when we passed a unique shop called Timbuktu. The window display drew us in. Caftans, handbags, incredible jewellery and more filled this shop. The largest part was Moroccan, but there were other countries represented. I walked out with a caftan because I fell in love with it's construction. Next time I'm in town I'm coming here to snag some jewellery.

This day was good to start with but it only went uphill from here. Last time I visited NYC I didn't have the budget to see a Broadway play.  I missed Kinky Boots when it went through Vancouver, so decided I was going to make it happen this time. Fortunately where it has been running five years and offers matinees, I could snag a great seat about row seven dead centre for the 3 p.m. show that was within my budget.

The Al Hirschfeld Theatre on West 45th Street off Time Square was literally two blocks from my subway stop.  I picked up my ticket at will call and got into the very short line-up.  A lovely family helped me out with the daughter snapping my pic with their dad (see top photo), then the doors opened!  Inside and to my left was the bar with two smiling handsome bartenders awaiting my order. This is when the fun truly started.

I asked if I bought a glass of wine if could I take it into the theatre as I didn't want to have to stand in the lobby and slug it down. They both smiled wide and introduced me to the wine sippy cup. WHAT? I was instantly curious. This plastic glass looks like a kid's sippy cup, but has a twist top that closes off the drinking and air holes to prevent spills. You twist to top open to drink, but here's the kicker. They give you a straw that fits perfectly into the drinking hole to sip through.  I could not stop laughing.

I snapped a picture of them, bought a wine in a sippy cup and headed into the theatre. True to form, I started talking to those around me and showed everyone my sippy cup while laughing. Soon a stream of patrons were headed out to get their very own sippy cup.  I carried mine home in my purse to make sure it didn't get broken and every time I look at it I smile. 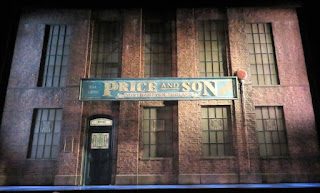 What a privilege to be at this performance. As it was my first Broadway play, I have nothing to compare it to, but it was spectacular. The first thing I noticed was that from the minute the play started, the audience began enthusiastically and audibly showing the actors their appreciation. The energy was palpable.

So many things have to come together for a play to be superb - casting not just great actors, but the right one for each part; a strong script; great music; wonderful set; fabulous costuming; great directing; great producing; spectacular lighting; an enthusiastic audience and last but not least, the actors need to bring their A game to their performance. This can't be easy day after day, show after show.

Every single element came together this day and I am filled with gratitude to have been there to be immersed in it. When all of us in the audience as one leapt to our feets to give a standing ovation, the actors smiled broadly. When ten minutes later we were still clapping and cheering, a few actors looked at each other and shared a high five. Brilliant and wonderful.

Every single person on that stage brought their A game so I hesitate to single out anyone, but have chosen three that I do want to mention. Killian Donnelly played the part of Charlie Price so well, we truly believed he was just a nerdy guy. Then he stepped in front of the set to belt out a solo and we all went crazy - amazing!  One seriously talented actor. 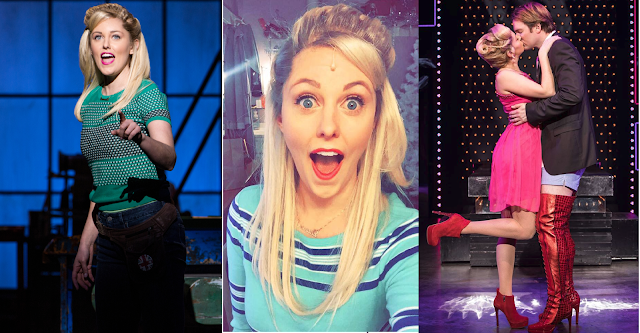 Then there was Taylor Louderman who played the role of Lauren - a young shoe factory worker who developed a crush on Charlie.  Her singing was superb, but it was her comedic timing and use of her body while singing these numbers that was truly brilliant.  The poses she hit and way she used her voice brought out every possible nuance and she had us all belly laughing.

Lastly, I want to mention J. Harrison Ghee who performed the title role of Lola to perfection. He brought me to laughter, tears and everything in between. Fabulous voice and truly wonderful interpretation of this important role.  While there were several times his singing left me in awe, it was his performance of Not My Father's Son that touched my soul. I was not able to fulfill the role my parents had hoped for me.  I can still recall how affected I was at the time a month later. Well done!

Thanks to all the cast and crew, to absolutely everyone who brought this moment together for me to enjoy. It's one I will never forget.