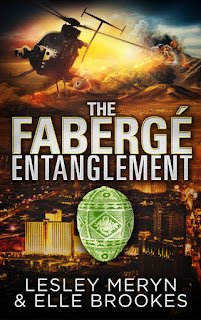 When Saber clashes with Steele; more than sparks will explode!

Sabinne ‘Saber’ Darrieux’s father, the billionaire CEO of Frontenac Global Security has been kidnapped. His ransom is not cash in a numbered offshore account, or a briefcase of Bearer Bonds but something utterly unique, incredibly valuable, and until recently, hidden away from the world.

The kidnapper seems to know Saber very well, and knows that the next day, through her work as an elite translator she will be in the same location as the Object. She must steal the Object and deliver it to the kidnapper to ransom her father.

Adrian Steele, a British Intelligence agent has just come off of two harrowing missions. Upon returning to London for a well-earned rest, he learns that his friend and fellow agent, has been murdered in Moscow, but not before he made use of a unique Object as a mobile ‘drop site’ for the valuable intelligence he was carrying.

​The drop site is traveling from Moscow to England. Steele insists on completing the mission to honor the death of his friend, Gerry Cornell.

At an ultra-chic quasi-diplomatic gathering in a mansion in Windsor, England, Saber and Steele meet and find themselves faced with a powerful, undeniable attraction. But at the moment, this compelling attraction is very inconvenient.

In reality they are at the mansion to check out the security arrangements — for their own reasons — to steal the Object, a Fabergé egg worth thirty million dollars. But who will get to the egg first?

Fabergé eggs are very famous for their unique surprises. Saber and Steele are about to be very surprised, indeed.

I love reading a wide range of books from spy to murder mystery to science fiction to biography.  The biography is for when I want to explore the lives of others. The rest all fall into what I call escape reading.  They take me away from my daily grind by drawing me into their plot.  None do that better than one with international intrigue combined with a touch of romance. The Fabergé Entanglement does just that.

Here we have a talented, smart, independent professional woman - Saber Darrieux - a great role model of how strong women can be.  Opposite her is an experienced male British agent - Adrian Steele - stretched to his limit by the death of a friend and fellow agent along with three assignments back to back.  When the two bump into each other - literally - trying to steal the same Fabergé egg, both are distracted from their job by their instant chemistry. Saber manages in the end to escape with the egg. Embarrassed by his failure, Adrian is surprised to be instructed to tail her.

What follows is a cat and mouse game where who is lurking in the shadows is not actually clear.  In the end it turns out more than one source of evil has their hands in the game.  Saber is trying to deliver the egg to hopefully free her father from an unknown kidnapper.  Adrian is following her to try to figure out exactly who is lurking in the shadows and ultimately return it to his agency to protect the secret hidden within. It becomes a fight for their lives with the outcome not looking good.

Enjoyed an exotic, adventure-filled childhood, following her anthropologist father and travel writer mother to the farthest corners of the world. She later took inspiration from her Aunt Sophia Francesca and became the author of romantic adventure novels. She alternates her time between Los Angeles, and a family property located in Yorkshire England.

She is the author of the first two books of the Time Frame Series, LUST. MECHANICS. MINI COOPER. and SEX. COFFEE. TIME TRAVEL. Loves travel, discovering new foods to try, reading and writing. She currently lives in the central highlands of Costa Rica with her dog Pixie and her hedgehog Quiller.