The Austin Paradox (Book 2 in the Miracle Man Series) by William R. Leibowitz 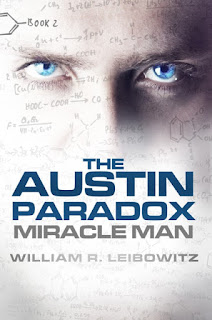 The Austin Paradox continues the remarkable saga of
Robert James Austin in a gripping emotionally-charged thriller that explores the most compelling issues of our time.

Having lost his extraordinary intellectual powers in a laboratory explosion that was intended to kill him, Dr. Robert James Austin, the greatest genius in history, whose medical cures saved countless millions, struggles to find meaning in a life that has become devoid of purpose.

As he embarks on a journey of self-discovery in an effort to regain his abilities, Austin battles private demons, otherworldly forces, and a government obsessed with controlling him. When ruthless political and business interests align to pose an existential threat to humanity, Austin is thrust into the maelstrom.

Doubted even by those who love him, Austin is confronted by a harrowing paradox as time runs out to save mankind from extinction.

The Austin Paradox is book two in a series and this is one time I think it's really important to read them in order.  Our main character was left at the end of the first book in a state that removed him from the research that was having a profoundly positive on the world, but having a truly devastating effect on him personally. The greatest genius in the world has lost his incredible intellect. He is still smart, but can no longer understand much of his early research and had to walk away from his life as it was. And this happened just as thinks he has discovered the cure for aids.  With all the notes destroyed - it is lost.

While Austin tries to settle into a quiet life enjoying family and a simpler life, his former work doing research calls him and it haunts him that people are still being affected by Aids. If he found the cure once, perhaps if  he worked through his years of research chronologically, like a child he could slowly grow back into the intellect he had before and again rediscover the cure.

In the background is a world in crisis. There is a terrorist who has had a new super disease created that could wipe out humanity. There is a government whose watchful eye is always on Austin to see if that incredible intellect will re-emerge so they can control and use it.  And then there is the former pharmaceutical company owner he put in prison. His mind on revenge and he is willing to do absolutely anything to bring himself back to his former glory, and wealth - including making a deal with the devil himself.

This is a great read and of his two books in this series, this is my favourite. The storyline definitely has more intrigue and thriller elements, the pace is a little quicker and it follows more of the personal stories behind what is happening and less on trying to follow the thoughts behind Austin's research. I can't wait for book three - yes there is one more coming!


~
Add to Goodreads
Meet the Author -

William R. Leibowitz practices law internationally and prefers not spending too much time in any one place. He is a graduate of New York University and Columbia University Law School.
​Connect with the author: Website ~ Twitter ~ Facebook