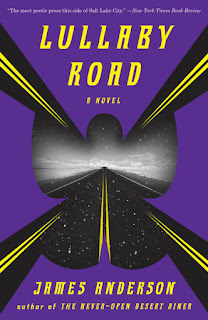 In LULLABY ROAD, readers will find themselves enthralled by
Anderson’s vivid sense of place and his beautiful and heartbreaking narrative.
Synopsis -

Winter has come to Route 117, a remote road through the high desert of Utah trafficked only by those looking to escape the world and those the world has rejected. Local truck driver Jones, still in mourning over the devastating murder of his lover Claire, is trying to get through another season of his job navigating treacherous roads and sudden snowfall without accident when a mute Hispanic child is placed in Jones’s path at a seedy truck stop along his route bearing a note that simply reads “Please, Ben. Bad trouble. My son. Take him today. His name is Juan. Trust you only. Tell no one. Pedro.” From that moment forward, nothing will ever be the same. Not for Ben. Not for the child. And not for anyone along the seemingly empty stretch of road known as Route 117.

​Despite deep misgivings, and without any hint of who the child is or the grave danger he’s facing, Jones takes the child with him and sets out into a landscape that is as dangerous as it is beautiful and silent. With the help of his eccentric neighbors—Phyllis, who turned up one day in her Rolls-Royce with two children in tow and the FBI on her tail; Andy, a Utah State Trooper who is on or off duty depending on if his hat is on or off his head; and Roy, an ex–coal miner who has lived in Rockmuse, off Highway 117, his whole life and survives on odd jobs and the kindness of his neighbors—Jones uncovers buried secrets of the desert that are far more painful than he could have imagined.

Lullaby Road is that wonderful genre of fiction where the people, especially the main character, guide the story rather than having them as secondary to the plot. We follow the main character - Ben Jones - whose simple and solitary life of driving a rig in the lonely desert to make deliveries to "desert rats" takes a decisive turn right that the start.  In chapter one, he has a mystery young girl with her dog and his tenant's baby thrust on him as he begins his daily run. What follows is a complex plot that only begins to become clear near the end.

There are two literary descriptions that come to mind for Ben, an anti-hero and a tragic hero. In looking up the definitions the second is most accurate - "...damaged emotionally; it's someone who has lost everyone and everything that have mattered to him; became a recluse and avoids getting attached to anyone or anything anymore in case he may lose them again." As we get to know him more, we do find out he has lost his love tragically and gets comfort from his long hours on the road, alone in the desert.

Ben is pulled out of his comfort zone as he is drawn in to not only the mystery of the young girl and her dog, but the disappearances (and deaths) of several key men who might have answers and the hit and run attack on another desert character who is a staple in his life. As he struggles to find answers, his interactions with the other characters helps them to come alive. They are not your everyday people. They all have pasts and secrets that have drawn them to the desert.

This is a great read, but in many ways a sad one. It is full of interesting, but damaged souls living fairly isolated lives.  The beauty and unforgivable nature of the desert is also made clear, especially when Ben is out all night in it looking for the mystery girl who has fled. And there are a few violent passages to be aware of.

I really enjoyed this reading this book. I did find out after reading it that it is the second in a series.  While it does stand alone, I wish I had read the other book first. 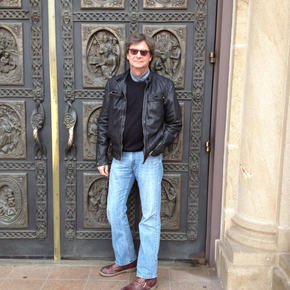 JAMES ANDERSON was born in Seattle, Washington, and grew up in the Pacific Northwest. He is a graduate of Reed College and received his MFA in creative writing from Pine Manor College. His first novel was The Never-Open Desert Diner. His short fiction, poetry, essays, and reviews have appeared in many magazines, including The Bloomsbury Review, New Letters, Solstice, Northwest Review, Southern Humanities Review, and others. He currently divides his time between Colorado and Oregon.
Connect with the author: Website ~ Twitter ~ Facebook