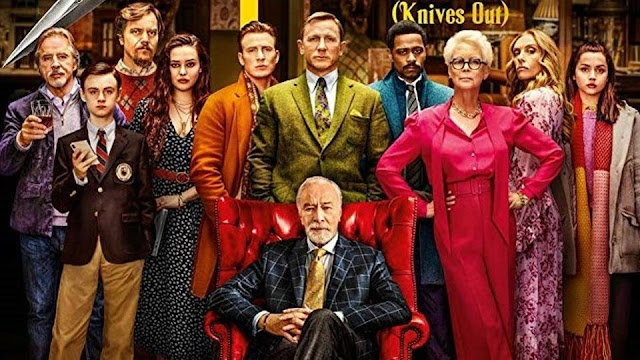 This 30 day writing challenge isn't just about developing a daily writing habit, it's about challenging myself as a writer. While most so far are sharing my thoughts, I wrote a poem one day and hope to write a fiction short story for another.


Today seemed like a great day for a movie review as I haven't written one of those in years.  My movie of choice for this is a fabulous murder mystery called Knives Out.  I saw a poster advertising it's upcoming release in a theatre before Christmas when I was there for a different movie and was instantly intrigued.

I love murder mysteries and I love one of the actors listed - Jamie Lee Curtis - so it went onto my must see list and was promptly forgotten amongst all the holiday chaos.  Fortunately my oldest son was home visiting.  When he lived nearby we always had a weekly movie night, so my first question to him when he arrived was what do you want to see? His response was immediately Knives Out!  Done. 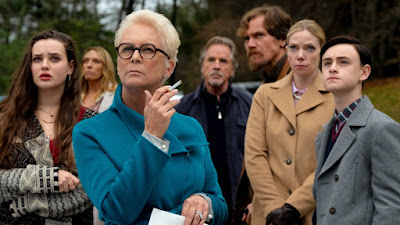 The 3 of us - my husband, my son and I - represent 3 very different viewpoints when it comes to movies. My husband studied theatre in university and can be very opinionated about what he likes and doesn't like. My oldest son has really delved into videos and articles on the art of movie making and storytelling. He also follows several movie critics who review films based on this criteria.  So he also can have a lot to say. I personally just love a great movie that draws me in and keeps me in suspense until the final moments - AND SCENE!

Knives Out Stars Dish on the Film's Devious Murder Mystery!

Amazingly all 3 of us gave this movie a thumbs up!  It did what all good murder mysteries do, kept us in suspense with plot twists and turns until the final reveal. The casting was bang on, the script well written and the technical filming of the scenes wonderful. Kudos as well to the set and costume designers. It came as no surprise this movie received so many award nominations. I would actually watch it again even though I now know the entire plot so I can enjoy the smaller nuances, and I most likely will when it comes out for rental.

The only thing that gave me pause personally was Daniel Craig's character and that is no reflection on his acting or role in the film. After seeing him as James Bond for several movies, I had a hard time accepting him as a southern detective with a thick drawling accent. Fortunately, as the movie progressed, my mind made the leap and all was well after that as we does a wonderful job with the role.

If you haven't seen this movie, I highly recommend you don't wait. It's one that really benefits by being seen on the large screen as you can see all the little nuances better.  Plus the longer it's out, the more likely someone will slip and let a few secrets out.  It's best to see this movie with absolutely no expectations so you can let the complex storyline draw you in.
fiction Jamie Lee Curtis knives out movie movie review murder murder mystery mystery review reviews