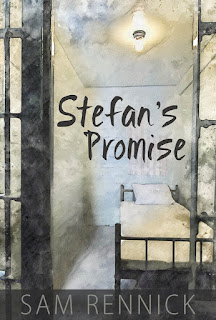 It’s 1968. America is rocked by assassinations, war protests and political upheaval. Alan Young, 21, is brooding over having been dumped by his girlfriend. This won’t last long. His draft notice is in the mail. Stefan Kopinski isn’t about to let the war get in his way. He spends his days at the mercy of his reckless ambition. When fate steps in, will he finally understand what has been right in front of him for 30 years? "Stefan’s Promise" is the story of Alan and Stefan. Circumstances part them and sharply diverging temperaments further erode their bond. Yet, Alan and Stefan are wrong in supposing their friendship has ended. It’s just getting started.


Stefan's Promise was an interesting book to read.  It is actually two books in one, the two stories written many years apart, but presented as a single novel. While both characters are a part of both books, the first half more intimately follows the life journey of Alan Young. The second focuses more on Stefan Kopinski's, as well as bringing them back together.

The early setting is in university during the Vietnam war and the two young men are fast friends.  But as each graduates (not the same year), their lives take different paths. Alan receives his draft notice. As a conscientious objector, he heads to Canada where he finds life it not as hoped. There is little work and a fair amount of prejudice towards draft dodgers. Even his desire to head back to university is thwarted. He marries and has a child, but finds life unsatisfying.  In the end, Alan makes a decision to own up to his choices and head back to the US to face the music. He is a man whose personal sense of right and wrong drives him forward despite the consequences.

Stefan on the other hand manages to get an exception by working the system. He finishes his law degree and after a lot of door knocking, lands a job that puts him on the road to success as a lawyer. As his career rises, he changes to a wife more in line with the image he needs.  He is consumed by his work. Although Alan sends regular letters, Stefan chooses to let that friendship slide.  He has come to consider it a university friendship that has nothing to offer given how their paths diverged.  Then Alan faces a serious crisis.  Stefan not only flies to help, but begins to get some clarity on his life and the choices he has made.

I enjoyed reading Stefan's Promise. I found it a little pat that most things went wrong for one character and most things went right for the other. But the way they were brought back together and how the story wrapped up was interesting. I was intrigued to read in the interview he did put Stefan's Promise forward as a two book series and found little interest - they preferred a single book - as I think it would have benefited by being two. But that is just my personal opinion. 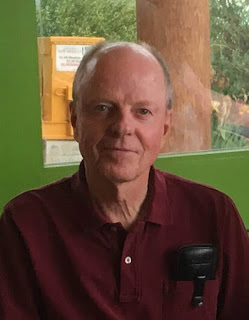 Sam Rennick began writing Stefan’s Promise forty years ago, but it wasn’t until fairly recently, when he retired from his law practice that he was able to take his manuscript from its drawer and finish it. He admits he wishes he could say he planned this all along, since the two books comprising the novel, though written many years apart, combine perfectly into a compelling narrative.

While many authors have influenced him, he singles out Somerset Maugham as his muse, observing that Maugham always starts with a good story, but often finds a way to insert that “something extra” separating merely a nice tale from literature. Sam’s interest in books is only exceeded by his love for baseball, which began when he was nine years old.