30 Day Writing Challenge Day #20 - To Butter or Not to Butter, That is the Question! 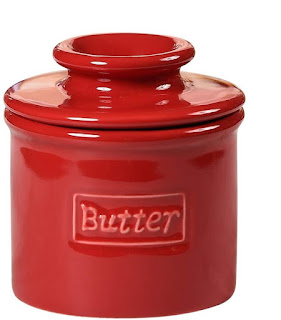 I am sure my very young years were probably pre-margarine. I just can't remember for sure.  But once margarine came out, my mum was an immediate fan. There were a couple reasons.  It was cheaper, marketing hailed it the next big thing, it was promoted as a healthier choice and, more importantly, it was so, so much easier to use.

That hard cube of butter from the fridge wasn't spreadable, and if left on the counter it didn't stay that fresh. Margarine, on the other hand was spreadable right from the fridge making it instantly easy to use.  I am sure the big push on it being healthier as it was made from vegetable oil didn't hurt, but it was that it was both cheaper and easier to use that sold my mum.

When I left home at a fairly young age, I took that bias with me.  It was the way I grew up so it must be right.  I also loved the ease, and I am sure as the various vegetable oils used to create margarine went through their moment in the sun as the healthiest choice - safflower, corn, canola - I switched to the tub of spread that featured what was promoted as the current healthiest option! Oh how we are misled by advertising. 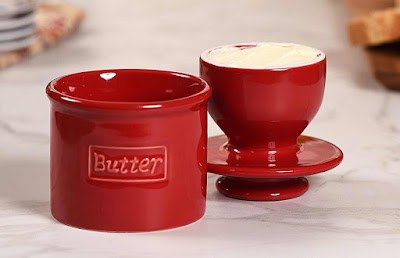 By the time research came back around stating the process of making margarine meant it wasn't all that healthy, that it was better to have small amounts of natural fat than a synthetic creation, I was pretty entrenched in my beliefs.  And no matter how much I read or people talked to me about the issue, I kept thinking about how hard butter from the fridge was to spread. It just wasn't quick and easy. Plus we didn't eat enough of it to keep it on the counter. It was have gone off. A conundrum.

So time passed and nothing changed. Then one day I remembered my cousin receiving a gift in the 1980's. It was an unusual butter container. There was a bottom pot and then a top lid that had an upside down cup on it. You put a little water in the bottom, filled the upside down cup in the lid with real butter and then placed the lid on the jar. The water sealed the surface of the butter, keeping it fresh even though stored at room temperature, and it didn't leak out into the water. The butter also stayed soft so you could easily spread it on that piece of hot, crusty toast. Was this still available?

At first I didn't think so. Most items I saw looked like little crockery pots with lids, sort of like something you would store jam in.  But I didn't really look hard, nor look at the ones I saw closely.  I finally decided it was time to make the switch to butter and bought a 4 pack of sticks, but grumbled as I struggled to spread hard pats. In despair I ordered a Butter Bell Crock by L. Tremain in bright red thinking it was better than nothing. SURPRISE!

No one was more taken aback than me when I opened the box and realized this was exactly what I remember my cousin receiving. I should have realized from the name - butter bell - but I didn't. My husband looked at it skeptically, sure it wouldn't work. But I was over the moon. I washed it out, filled the little upside down cup on the lid with softened butter, put 1/3 cup cold water in the base and placed the lid on. Perfect.

The next time I made myself a piece of toast, I simply took the lid off, turned it upside down and set it one the counter. The circular handle on the lid makes a perfect base to stand the lid on when you turn it over. The butter was easy to scoop out and spread. It'll take a few weeks to determine if it keeps the butter as fresh as it claims. Again, we just don't eat a lot. of it. So that is important. But for right now, I'm thrilled.

Note:  While I brought red, the Butter Bell Crock comes in tons of colours, both shiny and matte glaze finishes,a striped series, and I even saw a BW cow print one. There are several sources, however the biggest colour selection seems to be on Amazon.com.