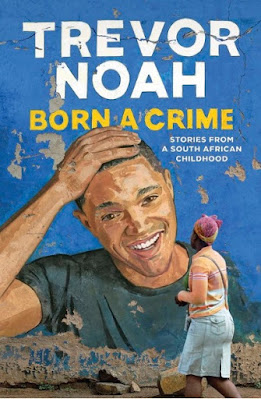 The compelling, inspiring, and comically sublime story of one man’s coming-of-age, set during the twilight of apartheid and the tumultuous days of freedom that followed.

Trevor Noah’s unlikely path from apartheid South Africa to the desk of The Daily Show began with a criminal act: his birth. Trevor was born to a white Swiss father and a black Xhosa mother at a time when such a union was punishable by five years in prison. Living proof of his parents’ indiscretion, Trevor was kept mostly indoors for the earliest years of his life, bound by the extreme and often absurd measures his mother took to hide him from a government that could, at any moment, steal him away. Finally liberated by the end of South Africa’s tyrannical white rule, Trevor and his mother set forth on a grand adventure, living openly and freely and embracing the opportunities won by a centuries-long struggle.

Born a Crime is the story of a mischievous young boy who grows into a restless young man as he struggles to find himself in a world where he was never supposed to exist. It is also the story of that young man’s relationship with his fearless, rebellious, and fervently religious mother—his teammate, a woman determined to save her son from the cycle of poverty, violence, and abuse that would ultimately threaten her own life.

The stories collected here are by turns hilarious, dramatic, and deeply affecting. Whether subsisting on caterpillars for dinner during hard times, being thrown from a moving car during an attempted kidnapping, or just trying to survive the life-and-death pitfalls of dating in high school, Trevor illuminates his curious world with an incisive wit and unflinching honesty. His stories weave together to form a moving and searingly funny portrait of a boy making his way through a damaged world in a dangerous time, armed only with a keen sense of humor and a mother’s unconventional, unconditional love.

Respect to Trevor Noah. Respect to the amazing mother who raised him and encouraged him to really THINK! Before I talk about the book itself, let me encourage you to hear it for the first time as an audio book.  Noah is multilingual and rolls through the accents that surrounded him growing up seamlessly. It adds a wonderful element of authenticity that just can't be replicated in print.
I tend to shy away from celebrity biographies. Just a personal bias I'm afraid.  However, Born a Crime came recommended by several friends. And when I saw the audio book was narrated by Noah himself, I decided to take a chance. I'm so glad I did. It is a great read that will open your eyes to not just South Africa, but to racism and poverty on a larger scale.
Born and raised in North America, I grew up hearing bits and pieces about South Africa and Apartheid shared through the lens of local media sources. Very biased and inaccurate. In Born a Crime I instead hear a close and personal account of someone born and raised there. That it was shared by someone who stood outside ALL of the ethic groups - not really accepted as black, white or colored - the perspective shared is unique.  The account is very personal and from the heart; and it is shared with great thought, intelligence and insight.
So many things I could share, but I have to pick just a few. Noah makes a statement at the end of a long chapter about his brush with the law that went something like - I now understood the difference between committing a crime and a being criminal. Yes there is a difference.  In the book he also talked about how a shared language united people, and how a language barrier divided people. I can't resist finishing with three more quotes taken from the book as they stand better on their own.
“We spend so much time being afraid of failure, afraid of rejection. But regret is the thing we should fear most. Failure is an answer. Rejection is an answer. Regret is an eternal question you will never have the answer to.”
“Nelson Mandela once said, 'If you talk to a man in a language he understands, that goes to his head. If you talk to him in his language, that goes to his heart.'"
“People love to say, 'Give a man a fish, and he’ll eat for a day. Teach a man to fish, and he’ll eat for a lifetime.' What they don’t say is, 'And it would be nice if you gave him a fishing rod.' That’s the part of the analogy that’s missing.”
Buy the book at - Amazon (worldwide), Barnes and Noble, Books-A-Million, Google, Hudson Booksellers, iBooks, Indiebound, Kobo, Powell's, Chapters Indigo, Waterstones (UK), Booktopia (Australia) and Mighty Ape (NZ) 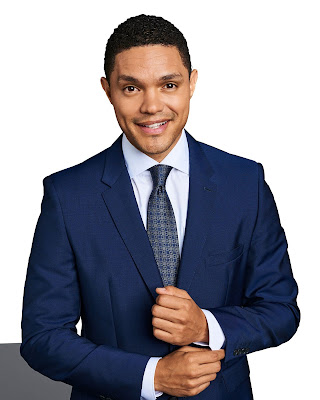 Born in South Africa to a black South African mother and a white European father, Noah has hosted numerous television shows including South Africa’s music, television and film awards, and two seasons of his own late night talk show, Tonight with Trevor Noah. He is the most successful comedian in Africa and is the host of the Emmy and Peabody Award-winning The Daily Show on Comedy Central. This year The Daily Show has been nominated for three Emmys, including Outstanding Variety Talk Series. Noah joined The Daily Show with Jon Stewart in 2014 as a contributor.
Last year, Noah debuted his one-hour stand-up special, Trevor Noah: Lost in Translation, on Comedy Central. Noah was the subject of David Paul Meyer's award-winning documentary film You Laugh But It's True which tells the story of his remarkable career in post-apartheid South Africa. His Showtime comedy special, Trevor Noah: African American premiered in 2013. He was nominated for "Personality of the Year" at the 2014 and 2015 MTV Africa Music Awards and won the award in 2015. Trevor's success has also spanned to sold out shows over 5 continents.

In November 2016, Trevor released his first book Born a Crime: Stories from a South African Childhood, which was an instant New York Times bestseller. Additionally, his performance on the Born a Crime audiobook was Audible’s highest rated audiobook of 2016, and has remained one of the top selling titles on Audible since its release. It was also nominated for two NAACP Image Awards, one for Outstanding Literary Work by a Debut Author and another for Outstanding Literary Work in the Biography/Auto-Biography category.
apartheid biography book books born a crime comedian freedom humor humour inspiration memoir racism review reviews south africa trevor noah