If At Birth You Don't Succeed by Zach Anner 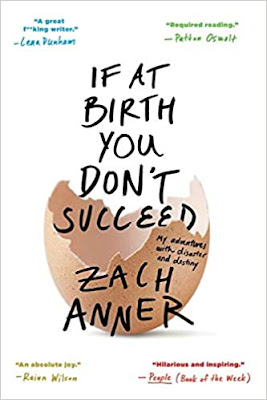 You'll laugh, you'll cry, you'll fall in love with the Olive Garden all over again, and learn why cerebral palsy is, definitively, "the sexiest of the palsies."
Synopsis -
Comedian Zach Anner opens his frank and devilishly funny book, If at Birth You Don't Succeed, with an admission: he botched his own birth. Two months early, underweight and under-prepared for life, he entered the world with cerebral palsy and an uncertain future. So how did this hairless mole-rat of a boy blossom into a viral internet sensation who's hosted two travel shows, impressed Oprah, driven the Mars Rover, and inspired a John Mayer song? (It wasn't "Your Body is a Wonderland.")

Zach lives by the mantra: when life gives you wheelchair, make lemonade. Whether recounting a valiant childhood attempt to woo Cindy Crawford, encounters with zealous faith healers, or the time he crapped his pants mere feet from Dr. Phil, Zach shares his fumbles with unflinching honesty and characteristic charm. By his thirtieth birthday, Zach had grown into an adult with a career in entertainment, millions of fans, a loving family, and friends who would literally carry him up mountains.

If at Birth You Don't Succeed is a hilariously irreverent and heartfelt memoir about finding your passion and your path even when it's paved with epic misadventure. This is the unlikely but not unlucky story of a man who couldn't safely open a bag of Skittles, but still became a fitness guru with fans around the world.

My daughter mentioned this comedian to me before when she shared about watching some of his hilarious videos on his YouTube station. Then she shared he had written a book and I was ready to check out what he was all about.
Zach  is one of those people that, despite the fact the world isn't always as accessible as he would like, he's always ready to give anything and everything a try.  He has Cerebral Palsy - the sexiest of the palsies as he likes to say - and eyes that love to do a little bit of wandering.  That mean a wheelchair is his constant companion and that things like reading and depth perception can be a challenge. But he's always ready for a challenge. In fact one of the many shows he created and filmed was a travel show where he was already ready to give anything a try.
In If At Birth You Don't Succeed Zack shares snapshots into his life from childhood to current times with a laugh is always near at hand. While there are more serious moments and self-reflective times, the larger part of the book is offered as a humorous looks at the absurdities of life and the fun that can be had along the way.  School memories from a time before they had any idea how to integrate students with different abilities, an internship at Disneyland (or was it Disneyworld), filmin a video travel show he created, being in and winning a contest for the Oprah network, toilet challenges, dating and more - no subject is off limits.
The serious moments are few and far between, but when they come, they are shared from the heart.  And all through the book you get a sense of the amazing friends and family Zack had to back up his dreams. Two even alternated letting him ride piggyback while they hiked through the forest in hunt of an illusive treehouse hidden in the woods around Whistler, BC.
This memoir is great look inside Zach's world and one that will hopefully break down the many preconceptions people can have about people who are differently abled. Yes I said differently abled. I have no idea if that's a real word, but after reading his book, I just don't care for the limiting sound of the word disabled. Zack proved time and time again, where there's a will there's a way.
Available as print, ebook and audio book - Amazon, Barnes & Noble, Indiebound, iBooks, Kobo, iTunes and Audible. 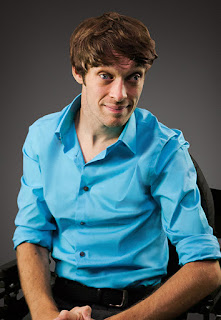 Zach Anner is an award-winning comedian, show host, and public speaker. In 2011, he won his own travel show on the Oprah Winfrey Network, Rollin' With Zach. He also hosted the shows Have A Little Faith for Rainn Wilson's media company SoulPancake, and Riding Shotgun and Workout Wednesdays on his own YouTube channel, which has over 10 million hits. Zach lives in Buffalo, NY and Austin, TX, and spends most of his spare time in his underwear, thinking about how he can change the world.
Connect with the Author: Website - YouTube - Facebook - Instagram - Twitter
biography book bookreview books disability humor humour if at birth you don't succeed memoire nonfiction review zach anner