The Back of the Turtle by Thomas King 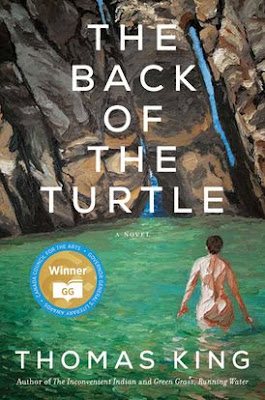 “Gracefully written, this is a fable-like morality tale. With King’s trademark flashes of humour, irony and deadpan delivery, The Back of the Turtle is populated with wounded characters who are trying to heal in the wake of an environmental disaster.” - Toronto Star

This is Thomas King’s first literary novel in 15 years and follows on the success of the award-winning and bestselling The Inconvenient Indian and his beloved Green Grass, Running Water and Truth and Bright Water, both of which continue to be taught in Canadian schools and universities. Green Grass, Running Water is widely considered a contemporary Canadian classic.
In The Back of the Turtle, Gabriel returns to Smoke River, the reserve where his mother grew up and to which she returned with Gabriel’s sister. The reserve is deserted after an environmental disaster killed the population, including Gabriel’s family, and the wildlife. Gabriel, a brilliant scientist working for Domidion, created GreenSweep, and indirectly led to the crisis. Now he has come to see the damage and to kill himself in the sea. But as he prepares to let the water take him, he sees a young girl in the waves. Plunging in, he saves her, and soon is saving others. Who are these people with their long black hair and almond eyes who have fallen from the sky?

I literally knew nothing about Thomas King, his writing or what this book was about other than the synopsis showing in my local library (through the Libby App they use). I stumbled across the title on one of their fiction lists and found myself intuitively drawn to check it out.  I am so glad I did.
I love the Toronto Star's description of this at a "fable-like morality tale" as I was having a hard time describing how I experienced reading it. That's a good start.  The author's writing style is stunning and his story telling has an intimate and personal feel. While there is a plot included in The Back of the Turtle, I never really felt it drove the story.
For me, it was the wonderful characters I followed as I read that held my attention. I walked beside them, heard their thoughts, saw their actions, felt their emotions - and as I did, the story moved forward.  The book has a gentle flow that draws you along. It's a beautiful change from the fast pace found in so many books. And I loved the touch of magic about it - never stated as real, but just suggested and left without explanation.
I can't wait to read more of King's work.
Meet the Author - 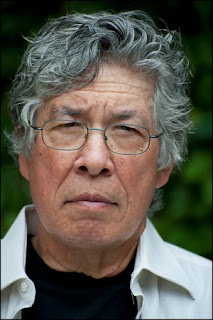 THOMAS KING is one of Canada's premier Native public intellectuals. King was the first Aboriginal person to deliver the prestigious Massey Lectures, and is also the bestselling, award-winning author of six novels, two collections of short stories and two nonfiction books. He won the 2014 Governor General's Award for Literature for his most recent novel, The Back of the Turtle. His non-fiction tour de force, The Inconvenient Indian: A Curious Account of Native People in North America won the BC National Award for Canadian Non Fiction and the RBC Taylor Prize, as well as being a finalist for 2015 CBC Canada Reads. He is a recipient of the Order of Canada. He lives in Guelph, ON.
aboriginal aboriginalauthor author awardwinner book bookreview books fiction History Literature thebackofthe turtle thomasking