Many years ago I began to notice recipes for making your own dry soup mixes in the magazine that could be given as gifts.  I never tried any, but always thought it was a clever and inventive dry soup versions at farmers markets.  I'm not sure exactly when I saw first saw the line created by Mitchell's Soup Company, but I think it was at a summer market near where I live several years ago.

I love supporting local entrepreneurs and bought 4 or 5 different kinds of soup mixes from them that day - a few for me, a few to give away as gifts. You are asked to purchase a few extra ingredients to go along with what is contained in the clear plastic sleeve, usually meat and veggies, but overall they are usually fairly simple to make.  I've always been happy with the results - just good warm filling home style soups. (I haven't tried their rice dishes.) 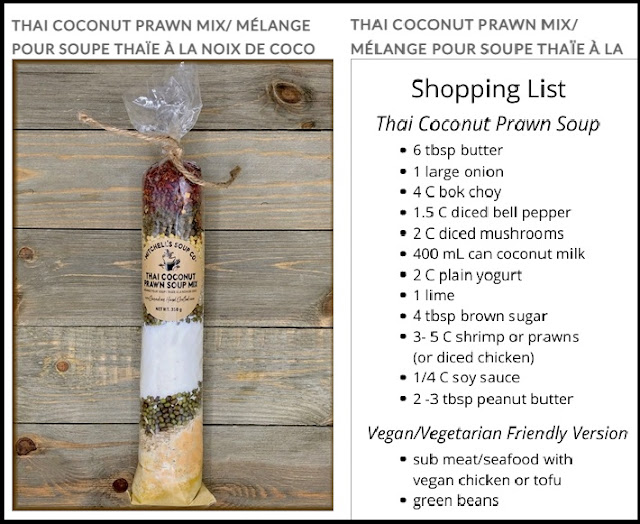 Then one day I discovered a display of Mitchell Soup Mixes in my local grocery store. What an unexpected surprise.  I bought several. If I remember right, I bought the Old Fashioned Beef Barley Soup Mix along with the extras needed to make it. It was a gift for my bonus daughter who was stopping by for a visit later - just something she could make at home. And I snagged one called Thai Coconut Prawn Mix.

I love the flavours in Thai food, whether spicy or mild, but not a fan of shrimp and prawns.  However, it's so easy to substitute the protein in a soup and the meat from a grocery store roasted chicken would work just as well.  This mix set around on the counter until yesterday when I was craving a warming soup for supper. We were headed to the store for a few things, so I started my list of extras and was really surprised by how long it was. A full 12 ingredients were needed in addition to the package mix - some basic staples, but several I needed to get. This was a lot more than usual.

After we returned home I quickly scanned the back for the basic instructions. What I didn't notice was the cooking time - WOW it was long. Things had to be chopped and sautéed, then it had to be simmered 70 minutes, and then a little extra heating at the end when you add the final few ingredients. I hadn't allowed enough time - dinner would be very late!

In that moment I was hoping this would not be something I enjoyed at all.  It had too many extra ingredients and the cooking time was too long. BUT - as I added the final soy sauce and peanut butter and gave it a stir, the smell that arose from the pot was divine. My mouth started to water and I couldn't wait to dig in. It was truly delicious as well as very filling. It made a large enough pot for 5-6 full meal-size bowls of soup.

So there you go - you just never know do you? I will be picking up more packages of this specific mix and will be using it for an upcoming family mid-day get-together  along with crusty slices of home made bread. YUM! I might also try it in the crockpot sometime.