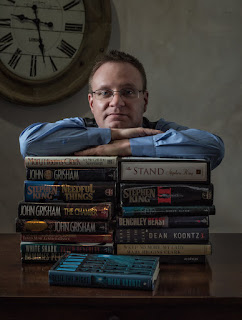 Can you share a bit about your journey to becoming a writer/published author? Did your interest in writing start in your childhood or as an adult?
I wanted to be a mystery writer as early as grade school. I would read the Encyclopedia Brown mystery books and come up with my own mysteries and try to get my little brothers to solve them. I also wanted to be Spider-man when I grew up, so I think I took the right path.

I’ve been writing my whole life and wrote my first novel in college. In it, a college girl receives cryptic poems and gifts and assumes they’re from her ex-fiancée… until he turns up dead, that is. I dusted off that manuscript in 2013 and edited it, then published it as Prey of Desire on Amazon. I published two more mysteries on Amazon before Milford House Press published H_NGM_N: Murder is the Word in 2019. That mystery won Gold (1st Place) in Mystery & Crime Fiction and 1st Runner-up for Book of the Year at the Florida Royal Palm Literary Awards that year. Now Milford House Press has just published my new mystery, Darkness Hides.
You write books in the the genre of murder/mystery/suspense. What drew you to this genre? What are the challenges when starting a new title? Do you have to do a lot of research?
I’ve been reading murder mysteries my entire life. My grandmother introduced me to Mary Higgins Clark when I was a teenager, and I loved trying to solve the murder before the big reveal in the final chapter. I think that’s what draws me to mysteries: there’s a puzzle to solve. It’s as much fun to create those puzzles as it is to solve them.

Starting a new book means coming up with a new mystery for the heroine (and reader) to jump into. I generally start with the murder and have a very clear idea of who the victim is and who the murderer is. Why the murder was committed and who will be challenged to solve the mystery comes next and can take weeks (if not months) to develop. Research plays a big part in that development. I look up different murder methods as well as background info for the heroine, the murderer, the victim, and the many suspects.

For Darkness Hides, I spoke to several Florida Fish and Wildlife Officers and got an idea of what their world was like and some of the crazy adventures they’d been involved in. The protest that gets out of hand with dirty diapers being thrown at the construction crews and the deaf child who spoke through her teddy bear were both based on stories they told me.
How does the writing process work for you? Do you schedule a time every day, work madly when inspiration hits or ? What do you enjoy most about the process? What do you like the least?

I try my best to write every day, but I don’t have a word count or a page count. I try to write a scene a day (or rewrite one). I’m an intense outliner, and I write out every scene in the book on index cards and paste them on a wall in my office. I move those scenes around, insert new scenes, and sometimes rip a few cards from the wall and rip them into tiny shreds out of frustration. I’m sure I look like a stark raving lunatic to anyone who comes into my office and doesn’t know I’m a mystery author. However, that’s the fun part—bringing the story together and developing the scenes. Writing those scenes can get tough, and I don’t write in order. I usually start with the ending, and completely write the big reveal where the heroine’s life is in jeopardy and it looks like the murderer is about to get away with, well, murder.

The hardest part of novel writing is the editing phase. Once a solid draft is written (and that’s generally like draft 30) and sent to the publisher, there will be several more rounds of editing. This can include fixing continuity errors the publisher caught, rewriting weak scenes, over-used words, or confusing sentences. By this point, my brain is fully engaged in the next mystery, and it can be a chore to edit the current manuscript. Darkness Hides had three rounds of edits sent to me by the publisher, but as tiresome as that can be, it’s a critical step. The finished novel is a better story and stronger mystery due to their edit requests.

Where did the inspiration for Darkness Hides come from? For the characters that inhabit this story?

Darkness Hides started with a single scene: a married couple is riding out a hurricane inside their dark, boarded-up house and, amid this raging storm, they hear someone knocking on the front door. The story grew from there.

I knew I wanted to write a story about a hurricane and about a married couple, Redd and Elise Tyler, who are grieving over the loss of their son. Redd is dealing with the grief by building this model train set in the garage and Elise is locking herself in her son’s bedroom and reading her son’s favorite book over and over. Originally, Redd and Elise were the main characters, but they were too dark to carry the story. That’s when I created Kate Parks, Elise’s sister.
Why did you choose to feature a damaged heroine to carry the story?

Kate is dealing with a physical injury, more so than an emotional injury, and she’s strong enough to pull her sister out of that blackhole of depression. At the same time, Kate’s trying to put her life back together after getting shot in the line of duty. She’s attending physical therapy and working a new job as a boat safety instructor. She’s dealing with the stress by adopting a menagerie of damaged animals, including a one-eyed owl, a squirrel missing an arm, and an abandoned dog. So the “damage” inflicted on her has made her who she is when the story begins. She longs to go back to who she was before the injury, but by the end she learns to accept who she has become and where is in life. So, without the damage, there’s no heroine to write about.

In this story some of the characters have really dark moments emotionally, and the pace can be very intense at times. How do you make sure you leave that behind when you stop writing for the day? What do you like to do to relax, unwind and recharge?

Honestly, I would love to know how to leave all that behind for the day when I stop writing. If I’m not writing, I’m thinking about writing. I’m thinking about scenes or dialog or fixing a plot issue. When I’m deep into writing that first draft, I’m not much fun to be around either. I’m totally distracted. I’m constantly jotting down notes. I bring my laptop everywhere and will just start typing in the middle of dinner at a restaurant. I’ll wake up at 2:00 AM because my brain was working on the story while I was sleeping and now I have the answer I was looking for and have to write it down. I get obsessive.
Any advice for new writers that hope to create work in this genre?

Whether you’re writing mystery or another genre, get involved in local writing groups. Critique groups can be great networking as well as give you feedback on your story and writing. They can also keep you motivated. If the group meets every two weeks, you know you have a deadline to get something written and turned in.

Also, look into writers’ associations. You can attend conferences with classes to improve your writing skills and meet publishers and agents. Those associations can be critical to your success.
Do you have any new books in the planning, writing, or due to be published phase that you can share about with readers?

I’m currently writing a sequel to my last book, H_NGM_N: Murder is the Word. The publisher would like a series and I’ve planned the next four mysteries for those characters to solve. I’m also outlining two more stand-alone mysteries that will become short stories in the near future, if not full-blown novels.

I’ve got a lot planned for the future and if anyone wants to keep in touch with me, I’m very active on Facebook and Instagram, and I have a website with updates as well.
connect with the author: website ~ facebook ~ linkedin ~ goodreads
author authorinterview darknesshides interview ireadbooktours jcgatlin murder mystery People suspense thriller