A Story From My Closet - A New Series looking for Submissions! 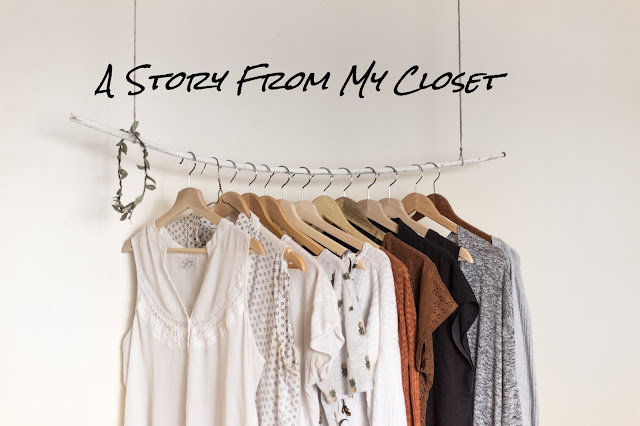 I have to thank Haley Sengsavanh for inspiring this new blog series. We were having a get to know you coffee after meeting at #VFWSS22 and what we discussed ranged widely - the journalism/writing industry, gender bias, age bias, ethnicity, fashion writing, the fashion industry, interviewing, books, styles of writing and movies all came up. It was so much fun.
I had a lightbulb moment when I mentioned a Netflix limited miniseries I had enjoyed called "Worn Stories."  Based on the New York Times Bestseller book of the same name by author Emily Spivack, it features videos of people sharing an item of clothing (or accessory or lack of clothing), and as well as the story behind it.  What memories did the clothing (or lack) bring up?  How did it affect their life?
A fascinating examination of the true weight of fashion, Worn Stories' ability to tie unexpected threads leads to unexpected and emotional connections that prove people have more in common than just the clothes we buy. - Netflix
One story came from a married couple who had become nudists. They weren't body beautiful and didn't care. They moved into a community that all were nudists. Most wore shoes or sandals, Some a shirt to protect their shoulders from sunburn. In any common areas, they all brought a towel to sit on. What was stunning was the woman's comment on body image. She had extra pounds and, as an older woman, things sagged and were dimply. But she said it was when she wore clothing that she was ashamed of her body. As soon as she embraced nudity, that poor body image fell away.
A 20 something man shared how wearing high heels liberated him. A former astronaut shared a t-shirt he had taken into space that brought to mind the long and bumpy journey he had to even being accepted as an astronaut, starting with vision that wasn't good enough. The stories vary widely and are incredibly uplifting and interesting. If you haven't seen this series yet, I recommend it. I have the book noted on my must read list.
At some point during our conversation, I shared how my favorite pieces in my closet weren't necessarily the ones that looked the most fab on me, or that everyone thought were to die for. They were the pieces that had a story to them.  The same holds for many of my pieces of jewelry and pairs of shoes.  Many are not expensive high end, but their story embraces me when I wear them.
Today is the introduction to my new blog submission series - A Story from My Closet. In the next week I will be sharing the story of one piece from my closet that, when I wear it, brings many fond memories.  And I am asking anyone who has a cherished garment or accessory with an interesting story you'd like to share, to do so in this column.  I just need a short write-up of 500-800 words, and a picture of you wearing or holding the treasure. Submit your writeup and photo to justbusiness1@gmail.com and put A Story from my Closet in the subject line!
Check back for my story in the next few day an I can't wait to hear yours.
accessories belovedclothing clothing fashion favorite fondmemory memory submissions tellmeyourstory vintage wornstories