Ladyparts: A Memoir by Deborah Copaken 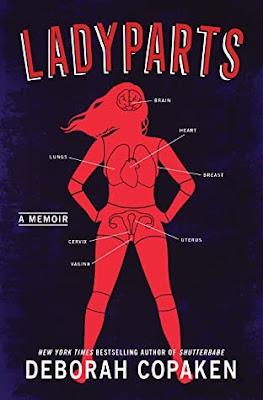 I’m crawling around on the bathroom floor, picking up pieces of myself. These pieces are not a metaphor. They are actual pieces.
Synopsis -

Twenty years after the publication of her iconic Shutterbabe, we remeet Deborah Copaken at her darkly comedic nadir: battered, broke, divorcing, dissected, and dying—literally—on sexism’s battlefield as she deliriously scoops up what she believes to be her internal organs, which have fallen out of her body, into a glass Tupperware container before heading off to the hospital for emergency surgery . . . in an UberPool.

Part cri de coeur cautionary tale, part dystopian tragicomedy, Ladyparts is Copaken’s irreverent inventory of both the female body and the body politic of womanhood in America. With her journalist’s eye, her novelist’s heart, and her performer’s sense of timing, she provides a frontline account of one woman brought to her knees by the one-two-twelve punch of divorce, solo motherhood, lack of healthcare, unaffordable childcare, shady landlords, her father’s death, college tuitions, sexual harassment, corporate indifference, ageism, sexism, and just plain old bad luck. Plus seven serious illnesses, one on top of the other, which provide the book’s narrative skeleton: vagina, uterus, breast, heart, cervix, brain, and lungs. She keeps bouncing back from each bum body part and finding the black humor in every setback, but in her slippery struggle to survive a steep plunge off the middle-class ladder, she is suddenly awoken to what it means to have no safety net.

Turning her Harlem home into a commune to pay rent and have childcare, she trades her life as a bestselling novelist to apply for full-time corporate gigs that come with health insurance but often not scruples. She gets fired from a health magazine for being unhealthy; laid off from a PR firm for rushing home to deal with a child’s medical emergency; and sexually harassed out of her newspaper column, only to be grilled by the FBI when her harasser is offered a plum job in the White House.

Side-splittingly funny one minute, a freak horror show the next, and quintessentially American, Ladyparts is an era-defining memoir for our time.

Review -
I enjoyed this title as an audio book narrated by the author, which I think is a huge plus for this memoir.
Usually when I finish a book, I have a good idea of what I want to share about the experience. Not this time.  I found the book chaotic to listen to. We move forward and back in time, through experiences of all sorts from work to family to health, with asides tucked in to other important experiences relevant in some way.  It took a while to get used to the ebb and flow, but once I did I couldn't stop listening. I suspect she wrote like she talked, with the words flowing onto the paper, and this helped give me a glimpse inside to how her life played out for her and a better feel for the story itself.
A lot of the themes and experiences shared came from the perspective of being a woman, a wife, a mother and how women as a group are marginalized. So much is intimately known about the male body and how to treat it, but there is a HUGE gap in terms of research on the female body, especially in the areas of hysterectomy and menopause.  Then there is a the significant wage gap between male and female counterparts, and lack of opportunity as well as consideration for female employees that are single mothers or married, but with total responsibility for the home and family.
Lastly is a scathing condemnation of the health care system in the U.S.  People are tied to jobs - decent or not - that provide adequate health care. How many new businesses are lost, how many books are not written, art work not created and people left struggling to keep up the pace while dealing with serious health issues. Without decent insurance, the costs of medical care is overwhelming, and the COBRA health coverage used bridge the gap between jobs is prohibitively expensive for most.
I am now going to order a print copy so I can go through this book again slowly and dig deeper into parts. But I am so glad I listened to the audio version first.
Buy the book: Amazon CA ~ Kobo ~ Audible ~ Abebooks ~ Alibris ~ Indigo.ca ~ WorldCat 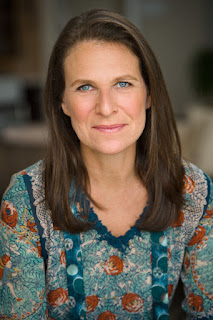 DEBORAH COPAKEN is the New York Times bestselling author of several books, including Shutterbabe, The Red Book, and Between Here and April. A contributing writer at The Atlantic, she was also a TV writer on "Emily in Paris," performer (The Moth, etc.), and a former Emmy Award-winning news producer and photojournalist. Her photographs have appeared in Time, Newsweek, and The New York Times. Her writing has appeared in The New Yorker, The New York Times, The Guardian, The Financial Times, The Observer, The Wall Street Journal, The Nation, Slate, O, the Oprah Magazine, and Paris Match, among others. Her column, “When Cupid is a Prying Journalist,” was adapted for the Modern Love streaming series. She lives in Brooklyn with her family.
Contact the author: Website - Twitter - Facebook - Instagram
ageism book books Deborahcopaken divorce equalpay feminism healthcare journalist ladyparts marriage memoir nonfiction payinequity sexism womenshealth writer