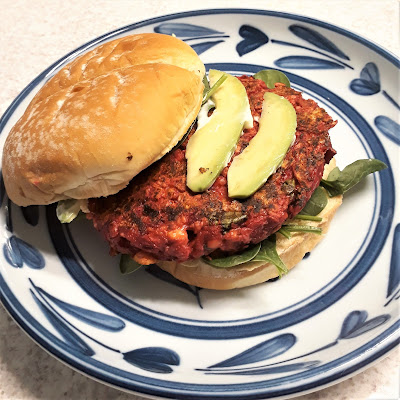 I am always exploring new options for meatless night. I love them, my husband not so much. However, when I get it right we are both happy.
Beets have been a favorite of mine since I was very young. At the start they were always tiny pickled beets or pickled beet slices served on a relish tray. You don't hear of relish trays much now, but when I was growing up they were a thing. Every real dinner with company had a relish tray. It had things like tiny sweet pickles, tiny baby dills, pimento stuffed olives, black olives and pickled beets. The small glass divided cut glass dish used to assemble the ingredients didn't hold a lot, so guests only took a piece or two when it was passed around the table.
Somewhere in my adult life I finally learned how to cook beets and fell in love with their natural flavor. First I boiled, then I roasted, then I discovered the joy of pressure cooking them in my Instant Pot. A bit of salt, pepper and a dab of butter were all I needed. They are oft touted on plant based recipe websites as a meat replacement as they have a great texture and full-bodied taste. They also don't fall apart when cooked and their flavor combines well with others, especially feta.

I have an amazing recipe for a Nut Burger I received straight from the chef of the now-defunct Isadora's Restaurant. so the bar is high. But I think it's a great goal. When searching for ideas I found a lot of variation, but also a similarity between them.  Several used oats as a grain to fill them out. Lots used feta as it is a normal flavor combination.  In the end I went with simple.  And I chose one with egg in it, so this is not Vegan. 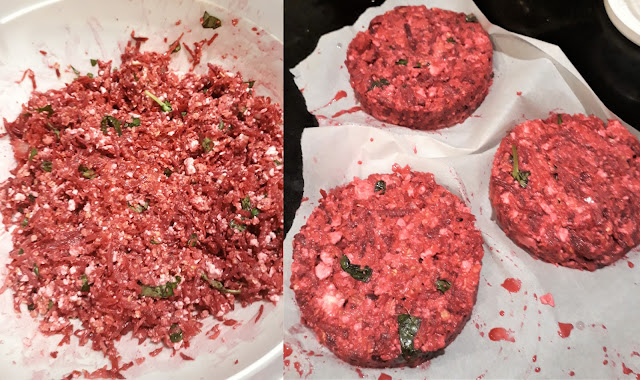 I found this recipe on a site called Green Kitchen Stories. Their image was to die for. There is no way it will be as good as theirs though, but I did my best. Why this one in particular? It was simple with less ingredients. I love playing with recipes and the simpler they are, they easier they are to use as a launch point to create your own unique version.
For the first try I followed the recipe pretty much as it was written.  I loved the final product in terms of appearance, texture and eat-a-bility. The mixture was very moist and yet I could make the patties and they held together fairly well. I fried them, so no idea how they would hold together in grilling. You end up with a browned layer on the outside and then the inside is more of a creamy texture.  I still think the walnut burger has the best flavor, but also way more calories.  So this is a great option.
Notes -
= = =
Beet and Feta Veggie Burgers
Makes 6-8 burgers depending on size.
Ingredients -
3 C                Grated raw beets (4 if med size.)
1                    Small onion, minced very fine
2 Cloves        Garlic, minced or pressed
1-1/2 C          Rolled oats, Wild Oats, Quick Oats or your favourite flakes
7 oz.              Crumbled feta cheese
2 T                 Olive oil
2                    Eggs
1 handful fresh basil coarsely chopped (I would guess I added a generous 1/2 cup)
Salt/pepper  (even with the feta, I found my patties needed more salt)
6-8                Buns (they suggest sourdough, but I just went with a good quality soft bun)
Optional - if you like a bit of spice you could add 1-2 minced jalapenos
Toppings - whatever you like
lettuce or cabbage or sprouts
mango (this I think would have been great. I'll be adding it next time)
avocado
tomatoes
onions
Mayo or Aioli
Hummus
Instructions -
Having made this once, here is what I think works best.  Peel beets, onion and garlic. If using jalapenos, cut off stem end and remove seeds.  Fit your food processor with a blade.  While it is running drop the onion and garlic (and jalapeno if using) through the shoot so they are minced finely.  Change to the shredding disc and grate the beets. Move all the vegetables from the food processor to a large bowl.
Add the oats, feta, olive oil, eggs and basil to the veggies. Sprinkle with salt and pepper and mix well. Let set for 30 minutes to soften the oats. This step is super important and should not be skipped or your patties won't hold together.
To make my patties, I used a Tupperware hamburger press.  I used a 3/4 Cup measure and that made 6 large patties. I filled the cup level with the mixture pressed firmly into it, Then put it in the patty ring set on parchment paper and used the presser to firm it into a burger shape. After I removed the ring, I patted it gently with my hands to made them a bit thinner and wider around. I am guessing a half cup measure would give you 8 thinner patties so I wouldn't press those out.  The original recipe says you can shape with your hands and if the mixture is too loose, add more oats.
The patties were very moist. I had to fight the urge to add more oats and dry them out. But they held together just fine when I moved them to the frying pan, you do have to be gentle though. And they flipped easily as long as I let them saute slowly on a lower temp until they had a nice crust on the first side.   I even flattened them a little more with my spatula so they were a big burger.
Prepare your buns with any toppings you like - you can even toast them first if you prefer.  Then place a burger on each and enjoy.  What did I serve with them? Corn on the cob was more than enough.
basil Beet beetburgers beets burgers feta foodie makeittonight meatless meatlessmeal oats recipe recipes sandwich vegetarian vegetarianburgers YUM