A Story From My Closet #9 - Jackie Diy, The White Gown 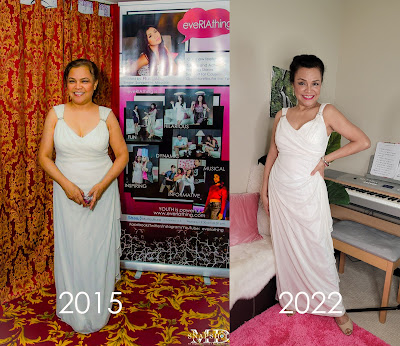 Guest Article by Jackie Diy.
I wore this white gown in 2015 during the first Wall Of Stars event by eveRIAthing because I forgot my black gown at home and my mind was on the event and my daughter, Ria, the symbol of the show. I love this white gown which I wore at Ria’s 16th birthday party but that night, it was a back up in case I forgot my black gown. I did forget the black gown.
As the event progressed, with very little make-up on and hair just casually tied in a bun, I met the guests on the red carpet and at the end of the night, spoke on stage to a sold-out audience, confident and proud and while I delivered my message, the words on my mind did not match what I was saying: “How could I have forgotten the black gown? What was I thinking? The last thing I wanted was to be very visible on stage.”

Flashback to a few hours earlier as the family was headed out the door for the venue, I was in my casual shirt and jeans because I knew that there will be a lot of pre-production running-around. I had my black gown ready because I always thought that black was the more appropriate color for the evening but more importantly because Ria was wearing her beautiful, elegant off-white gown.
As in a wedding, the mother should never up-stage the bride. This was her night and this was why I was frustrated with myself for wearing white. Doing so made me feel like I was inconsiderate and not ready for the event considering that we worked on it for a year. I was lost in my own project and although nobody knew how I felt, I was disappointed in myself. When we got home after, I found my black gown, draped on the couch and was ‘ready to go’.

Through the years, I’d see photos of myself in this gown and I would remember how successful that event was but also how remorseful I was for such careless oversight. However, after all that’s said and done, everything else was beautiful and that’s what mattered. That was 2015.

Today, I am wearing it again, not because I have an event to go to but because I wanted to see how it would make me feel after our family’s journey into health and fitness since 2017. This gown is originally a size 14 because I weighed about 140 lbs. then. I had to resize this to fit me today, at 112 lbs. Once again, this gown is a symbol of success but this time around, it represents hard work and dedication towards being fit and healthy.

This beautiful work of fabric will continue to represent what it was meant to do: To prove to myself and anyone else that when you put your heart into something, you will achieve!
= = =
Jackie Diy is a wife to an amazing husband and mother of two beautiful daughters, Deanne and Ria. She is Co-Founder of eveRIAthing TV, the Founder of and a Coach at eveRIAthing School, founder of GIFTS School of Theatre Arts, founder of an inspirational platform called The Real DIY, and a co-author of "Pursuit:365," a bestselling book featuring 365 Canadian women.
Links -
astoryfrommycloset beautifulfabric blackdress disappointed event eventphotos eveRIAthing fashion flashback frommycloset host memory photos symbolofsuccess wallofstars whitedress