A Story From My Closet #11 - Lynn Katey, My Wedding Dress 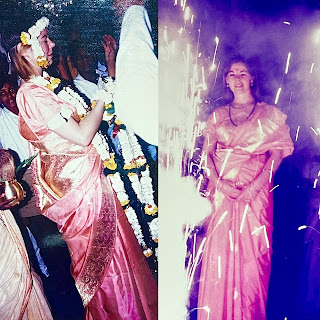 Guest Article by Lynn Katey
My wedding dress was not white, graced with a family past, nor in the latest style. It was flat, long, a wonderful peach colour and augmented with gold threads. I didn’t agonize over the purchase but bought it in the moment without knowing what its future might be. It is a light soft silk woven in South India, called Kanjiwaram. It drapes beautifully.

Flash back to October 30, 1970, Nagpur, India. I arrived at the family home of my boyfriend as part of a 3- week “round the world journey” we were taking together. It was to signify his 5th year living away from home and also driven by my curiosity to see his homeland and meet his family. No “wedding” was in our plans - just exploration and sharing.

Cultural and family traditions being strong, and our hearts young and adventurous, we agreed to wed soon after arrival and so my lovely sari, bought in Kolkata (Calcutta) a few days prior to this decision, took on an auspicious role.

The ceremony was planned and carried out within 36 hours. I was helped to dress, wore some borrowed jewelry and received a simple traditional wedding necklace beaded by my mother-in-law overnight. How things would proceed under the guidance of a priest was a mystery to me, but I followed instructions well !! My brother in law, who spoke some English, was also helpful. It is thanks to him that I have the few small photos taken with his simple film camera as remembrance of the event. 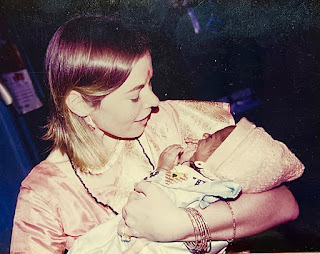 Our special day was also a night of fireworks and celebrations in honour of the Diwali Festival that happens every year in October. Of course there was lots of food, good-natured teasing and as many family members as could be rounded up in short notice.

I’ve included three shots reproduced from the 52 year old prints that make up my “album”. I am circling the priest’s fire in one, posing with fireworks going off in a second and the last one is with my first nephew who was having his one-month-old anniversary while we were there.

I still wear my sari on some occasions, though since then I have acquired quite a few others that offer competition when I am making a “what shall I wear” decision.

= = = =
Lynn Katey occupies her time as a part-time Marriage Commissioner, and a part-time volunteer for My Sister’s Closet charity fashion boutique. She sticks to a regular fitness schedule, has a painting day once a week, contributes to SMOC activities and newsletter, and attends lots of theatre and dance performances along with various arts/cultural events. She also loves to snaps photos on an irregular basis, reads as much as she can fit in. tries to keep up on what is happening in the world and LOVES to travel, though that has been tough the last few years.
adventure astoryfrommycloset comfort.fashion culture diwali fashion favoritegarment fondmemory sari silk submissionseries wedding weddingdress weddingsari