Child of the Etherclaw by Matty Roberts 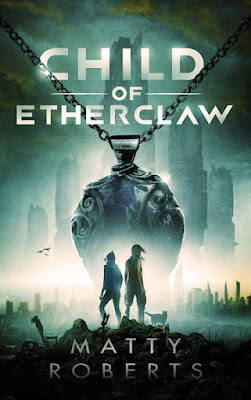 The bonds of family go well beyond blood. But can those bonds hold when the blood itself carries a devastating secret?
Synopsis -
Fenlee's opal necklace had always radiated a certain warmth since her mother's death. But now, at sixteen, her world begins to unravel as the stone sparks to life, revealing itself to be an otherworldly artifact of untold power.

Between her mechatronics studies at the academy and scavenging expeditions beneath the sprawling city of New Cascadia, Fenlee and her adopted brother, Elliot, try to decipher the mysteries of her necklace and its link to events in Fenlee's past.

But they're not alone in their search.

Strange undercity dwellers offer cryptic warnings, drones track their movements, and deadly corporate agents lurk in the shadows. When tragedy rips Fenlee's family apart, she must learn to use the artifact's power to save those who are deeply precious to her. But nothing can prepare her for the dark truths that she will uncover on that journey…

“Lee,” Elliot mumbled. “I'm not who you think I am.”
Review -
It's been awhile since I dived into a SciFi book, so I was intrigued to read Child of the Etherclaw. While the author has been writing for awhile, this is their first novel, and it's aimed at the YA market.
The plot takes us to a post crisis world. Strange aliens had appeared to put up pillars that counteracted serious global warming, giving mankind a second chance, then disappeared. The world is in shambles and trying to rebuild, with the elite living high up in the tiers, and the rest of the people scattered down below. The further down, the harder the life.  The main character we follow - Fenlee - is in the lower tiers. Her mother died years ago, her father is off world working. It's just her and her brother, trying to survive, while Fenlee works hard to raise them up.
There is a secret about Fenlee and her brother that slowly develops over the course of the story. They have something the story's evil protagonist wants, and what he will do with it will destroy many lives.  Roberts has worked in many themes that will appeal to YA readers - an evil villain, a twisted plot, young people who are targeted, and their struggles to defeat evil. Only they can save the day. Will they succeed?
Well written with an interesting story line. I suspect with the twist at the end, this talented author will go on to offer new titles in an Etherclaw series.
Buy the book:  B&N ~ Indiebound ~ Bookshop.org ~ Tattered Cover ~ add to goodreads 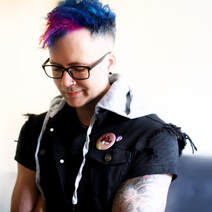 Matty Roberts began their career in journalism where they earned an Emmy and had the privilege of working on several other award-winning projects. They hold an MS from Johns Hopkins University and are now an engineer in renewable energy in Denver, Colorado where they live with their wonderful partner, two extraordinary kids, and the best doggie ever. In addition to writing, engineering, and parenting, Matty is a vegan enby nerd who is in love with this world and will forever be doing all they can to make it a better place. And they may be known to occasionally play in a punk band here or there.