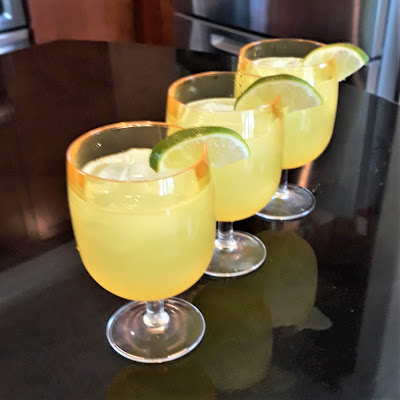 For my next foray into the science of cocktails, I decided to check out a classic - the Margarita. While overall the ingredients were similar from one to the next, there were some differences.  Lime juice versus lemon juice, agave syrup versus Cointreau, Mezcal versus Tequila versus White Tequila.  I decided on a direction that sounded interesting to me using white tequila, Cointreau and fresh squeezed lime juice.

Before I began, however, I decided it would be fun to know the history of the drink.  While who originally invented it is disputed - as always - the Margarita has been around a truly long time. It was invented sometime between 1935 and 1948 depending which origin story you embrace.  Here are the top six -

The perfect time to give this a try was when my friend Christopher came to visit. He has a fabulous palette and is good at giving hints to how I might change a recipe up to make it even better.  Having a daily cocktail before supper I make from scratch has become a fun thing we do together on his visits. And my husband joins us so I get another opinion to add to the mix.
The final drink proved the perfect libation for a hot summer day that we all enjoyed. In fact we each had two! Sometimes the classics are the best.
= = = =
Ingredients -
2 oz.                 White Tequila
1 oz.                 Orange liquor such as Cointreau or Grand Marnier
1 oz.                 Fresh squeezed lime juice
Optional - Coarse sea salt or chili salt for the rim of your glass